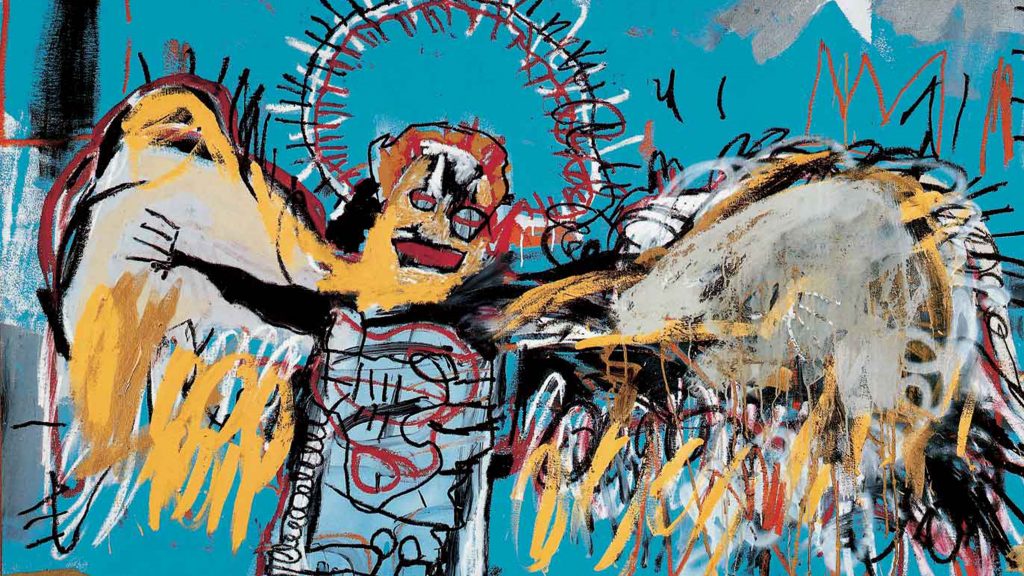 Opening later this month at Barbican Art Gallery is Basquiat: Boom for Real (21 September – 28 January) . The first substantial retrospective in this country of the work of Jean-Michael Basquiat, it is one the hot exhibition tickets of the autumn. Advance press is already offering some really good reads, a selection of which is included below (and which I’ll update over the coming weeks). Illuminations has a greater interest in this show than in most because in October 1985 we filmed with Jean-Michel in New York for our Channel 4 series State of the Art. You can purchase here a DVD of the 6 episodes of State of the Art (Jean-Michel is in the final programme), and we are also delighted to be distributing in this country Jean-Michel Vecchiet’s recent film biography of the painter, which is available here. All in all, the material we filmed back in 1985 has had quite an afterlife, with – for starters – extracts on view in the exhibition and a few frames in this Barbican trailer.

Much of our State of the Art sequence with Jean-Michel is officially on Youtube here, where in the last ten years it has had well over a million views.

State of the Art was directed by our colleague Geoff Dunlop, and it’s Geoff’s whose voice you can hear asking the questions. The series was conceived and written by Sandy Nairne, who also wrote the accompanying book, State of the Art: Ideas and Images in the 1980s published by Chatto & Windus in collaboration with Channel Four. He gives a vivid picture there of filming with the artist, and reflects on the complexities of his place in the art world of the time:

Jean-Michael Basquiat is an equivocal figure. The darling of the art world for his ‘fifteen minutes’, launched to fame and fortune at an alarming speed, he has had the self-assurance to position himself at the centre of the art world. Whatever his early defiance on the street, like many before him Basquiat has been absorbed by a system that needs increasing amounts of ‘new’ work to sustain it and frequently removes all that was significant from the work which opposed it. But even when purchased by corporations, banks and museums, his images, with their tough black faces and ironic use of ‘primitive’ and fetishistic elements, are not entirely accommodated. They speak in fragmented form of other experiences, and of a subversive, but contained, power.

What none of us who were in Basquiat’s studio that day in October 1985 could have anticipated was that Jean-Michel would die three years later at the age of 28 and that on 18 May this year Sotheby’s would sell Untitled, 1982 for$110,500,000, setting a new record high for any U.S. artist at auction.

Our 1985 footage has been used, both legally and not, in a number of subsequent contexts, including in Geoff Dunlop‘s Channel 4’s documentary about Jean-Michel Basquiat, Shooting Star (1990), which was produced by Linda Zuck. Most recently and remarkably, 18 seconds of it was licensed for inclusion in Jay-Z’s 8-minute video ‘4:44’. The section with Jean-Michel begins at around 5 minutes and 30 seconds in.

• Basquiat and downtown: Tim Lawrence for the Barbican on the downtown scene in New York in the 1970s and early 1980s.

• The Jean-Michel Basquiat I knew: a great long read by Miranda Sawyer for the Observer.

• Race, power, money – the art of Jean-Michel Basquiat: Olivier Laing for the Guardian on the complexities and contradictions of the artist and his art.