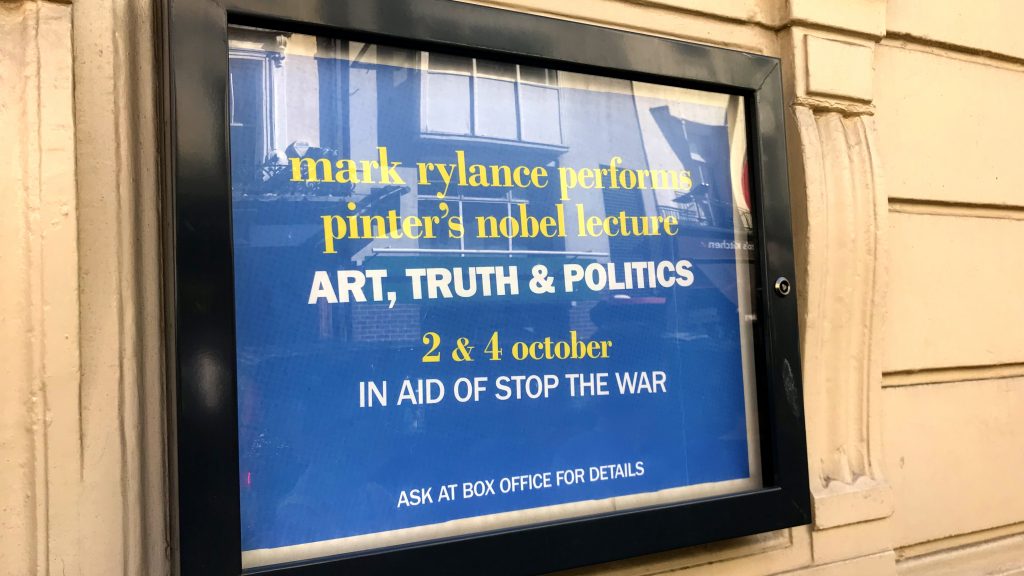 In the early evening on Tuesday and Thursday of this coming week, 2 and 4 October, Mark Rylance performs Harold Pinter’s Nobel Lecture Art, Truth & Politics as part of the excellent ‘Pinter at the Pinter’ season. These charity performances are in aid of the Stop the War coalition, and are directed by Harry Burton. Tickets can be booked here.

Our DVD of Harold Pinter delivering Art, Truth & Politics is available here. Harry Burton’s excellent film Working with Pinter is also available as an Illuminations DVD, which can be ordered here.

Harold Pinter has been very much a part of my life recently. Ten days ago I contributed a keynote lecture to the University of Reading/British Library conference organised by the Harold Pinter: Histories and Legacies research project. On Thursday I saw the first of the ‘Pinter at the Pinter’ performances which included a truly powerful staging of One for the Road with Antony Sher and Paapa Essiedu, directed by Jamie Lloyd, and Lia Williams’ remarkable production of Ashes to Ashes, with Paapa again and an astonishing Kate O’Flynn. And with the Art, Truth & Politics performances coming up, Harry Burton has prompted me to compose the following notes about what I recall about producing, with my colleague Linda Zuck, the 2005 recording.

On 13 October 2005 Harold Pinter learned that he had been awarded the Nobel Prize for Literature just 15 minutes or so before the official announcement. Over the next few weeks he worked on the text of a lecture that, as the condition of accepting the award, he was expected to deliver on 7 December in Stockholm. As Michael Billington wrote in the 2007 revised edition of his essential biography Harold Pinter,

Even now I am not sure that the radical nature of that Lecture has been fully grasped. What Pinter is saying is that art and politics are linked but proceed from different premises: that art is driven by the search for a truth which remains elusive while politics, as currently practised, is driven by the creation of palpable fictions even though there is a bedrock truth.

Michael Kustow, Harold Pinter’s friend and sometime collaborator, had been the first Arts Commissioning Editor at Channel 4, and he set about organising a television broadcast of the lecture in the UK. He first tried to get a live feed of it onto BBC News24, but without success. Then on 2 November, Kustow wrote to Harold Pinter:

I have been trying to ensure that a British television station broadcasts your Nobel speech live and in its entirety. I’m pleased to tell you that Channel 4’s head of arts Jan Younghusband and her colleagues have now agreed to do so. I hope you will agree that this offers you an even better platform for what you want to say, and that the prospect does not put any extra pressure on you… I hope you are on the mend after your fall, and buoyed up by the tsunami of support you  have deservedly received.

Channel 4’s digital channel More4, edited by Peter Dale, had committed to show the lecture live, and Illuminations and I were brought on board as producers. At this point it was expected that the playwright would travel to Stockholm to give the lecture which would be broadcast by SVT in Sweden. We booked a satellite uplink so that we could take a live feed for a 4.30pm transmission on More4, which would be followed by a tidied-up and edited version that evening on the main channel. David Hare agreed to introduce the showing, and we put in place facilities for the downlink and playout through the studio at Channel 4’s HQ in Horseferry Road.

This was still the intention until late November, although on the 21st Michael Kustow e-mailed the Nobel Academy to request that Harold Pinter be permitted to be seated to deliver the lecture ‘as his legs are swollen from the medication he is taking.’ The medication was to combat an auto-immune disease from which Pinter was suffering but he had also been in hospital for a few days in Dublin the previous month following a fall.

Earlier in November, on the 6th, Michael Kustow mailed his collaborators on the broadcast:

I was with Harold an hour and a half. The voice is kind of sunken, but I could hear everything. He’s more or less finished the speech. It will be called ART, TRUTH AND POLITICS. ‘I think it could be of interest’, he said. The main play he refers to is The Homecoming. Also One for the Road.

He is not letting anyone see the text, not even his agent, Judy Daish, and certainly not me, even though I offered to go over there and read it.  It will be transported by diplomatic bag and given directly to one Swedish translator. The audience will have the Swedish text handed to them as they go to their seats, not before.

We talked about whether his voice would last out, and what fall-back there could be if it didn’t. He wants an actor friend, Harry Burton, to be out there with him (and his six step-children, spouses and offspring). In the event of Harold drying, Harry will take over…

He asked me what ‘More4′ is, and I explained.

As a consequence of the playwright’s secrecy, Channel 4 was worrying away about the implications of the speech being broadcast live mid-afternoon on a weekday. Both swearing and possible libels were concerns, given the writer’s combative politics. Michael Kustow set out to ensure that the speech would be transmitted just as it was given. ‘If C4 run a delay,’ he wrote in an e-mail, ‘and bleep out the odd “shit”, it will be censoring Harold, and if he finds out he’s going to be censored he’ll pull out.’ The broadcaster’s worries about OFCOM and the courts were to some extent mitigated when Pinter decided he would arrange a very private rehearsal for friends, including Kustow, a few days before the event. At least there would be warning of potential libels.

On Saturday 25 November, following Pinter’s admission to the Royal Marsden Hospital with an infection in his legs, it was recognised that he would not be able to travel to Stockholm. In the next 48 hours, with the involvement of the Nobel Academy, we put together the plan that he would record the speech and this would be shown on monitors in the room where the lecture was to have been presented. We arranged for Channel 4’s studio to be available on the following Sunday afternoon.

On the morning of 4 December we brought in to the studio the large blown-up photographs that would be the backdrop, lit the space, and loaded into the autocue the speech with which we had now been entrusted. The playwright arrived in a wheelchair wrapped in the Beckettian blanket in which he so memorably delivered his words. As I recall the session, which started around 3pm and was over by 4.30pm, we stopped on only a very few occasions. At the wrap he and those friends who had accompanied him, including Lady Antonia Fraser, went off to a green room for drinks, while I began the evening’s task of editing together the various takes.

The next morning, Monday, we couriered to Stockholm a copy of the master on a Digibeta tape for the showing on Wednesday afternoon. But it had been agreed that Harold had to approve the edit before anyone could see it. So it was that at 5.30pm that afternoon I arrived with a small DVD player at the Royal Marsden in the Fulham Road to preview it for him. I think I was unaware that he had invited friends to his hospital room to watch it, and when I demonstrated the player he was frustrated that the volume was not sufficient. “Can’t hear the bloody thing,” he said, somewhat forcefully.

I can still recall the terror with which I ran down the Fulham Road searching for an electrical shop that would sell me a portable speaker to amplify the modest output of the player. Fortunately I spotted a suitable speaker in a window, fumbled with a credit card to pay for it, and rushed back to the hospital where, as his audience were arriving, I completed the set-up and showed him how to start the playback. “Now fuck off,” he said.

I went across the road and nursed a glass of white wine for the best part of an hour before nervously returning to the room. Champagne was flowing and a celebration was underway. Harold Pinter acknowledged his approval of the recording with a nod, at the same time as indicating that I should dismantle the player and speaker as rapidly as I was able. Which indeed, amidst much relief, I did, aware that had he wanted changes I had no idea how we would facilitate these before the Stockholm event, which by then was only about 40 hours away.

I still have the portable speaker, which sits on my desk as I write – and I recall that, in lieu of a fee for the broadcast, we clubbed together with Michael Kustow and bought as a gift for the playwright a portable DVD player.