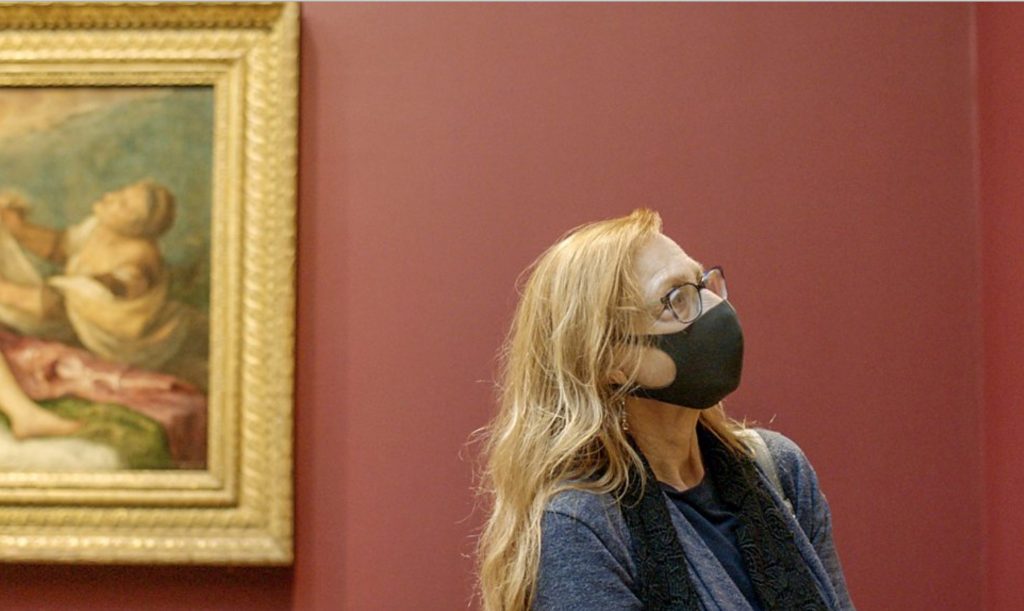 John Wyver writes: Frustrating as being isolated at home is in many ways, it is also fascinating for the opportunity to observe how cultural organisations are conjuring up all sorts of smart, innovative ways to respond to the crisis. As well as finding this a rewarding experience in and of itself I am also deeply intrigued by what we might learn from the new forms and aesthetics that are emerging, as well as from the models for producing and funding this work, and what we can perhaps take in to The After.

Tonight, BBC Four begins Museums in Quarantine, a series of half-hour films made in galleries under lockdown; the first has Alastair Sooke wandering around ‘Andy Warhol’ at Tate Modern. This seems a good prompt to look in a series of posts this week at how museums and other institutions are, sometimes with broadcasters but often not, making their works and shows available.

To kick off, today I want to consider three approaches to presenting locked-down exhibitions on screen. One is the BBC Arts film Titian: Behind Closed Doors (above, on BBC iPlayer for another week or so); this was made by the independent Matchlight with the National Gallery in the run-up to its major exhibition ‘Titian: Love Desire Death’ that closed just three days after it opened.

The others are videos made by museums: Picasso and Paper: Virtual Exhibition Tour from the Royal Academy, about a show that I was fortunate enough to walk around in The Before, and Van Eyck from Home, a tour of the show ‘Van Eyck: An Optical Revolution’ at the Museum of Fine Arts (MSK) Ghent, for which I had a ticket, a Eurostar reservation and a hotel booking.

‘Filmed, produced and directed by’ Matthew Hill, Titian: Behind Closed Doors is a kind of contemporary gold standard of exhibition media. This is a lavish production with classy cinematography (director of photography Ariel Grandoli), location shooting in Germany, Italy, Spain and the USA as well as in Britain, and a cast of thousands. Or at least it seems that many, as we encounter in elegantly filmed interviews a succession of curators, biographers, artists, academics, conservators, a banker and even a glamorous Italian lady who lives in Titian’s house in Venice. For my money, in addition to the National’s curator Matthias Wivel and Gabriele Finaldi, Jill Burke offers the most acute commentary.

(Somewhat bizarre and unfortunate, however, is the Italian artist who has worked in Titian’s studio for 60 years and who decides that he will use his BBC-bestowed moment of fame to boast of his own conquests of a string of women, for which he whips out his mobile phone to show us their portraits.)

A tour of the six masterpieces that Titian painted for Philip II of Spain takes in topics including the influence of Ovid, the artist’s use of paint, political power, print-making, the objectification of women, the depiction of sexual violence and the morality of gazing on that now, and – somewhat inevitably – whether artists have sex with their models. There’s much of interest, although the treatment too often feels a touch superficial. There were times when I longed for more depth, more engagement, more intellectual investigation.

We get to see the main canvases close-up and in detail, but the sumptuous camerawork is never quite confident enough about what it is showing to stop and simply look. The continuous movement of the frame is accompanied by insistent music, but there is no overall narrator and the argument of the film is constructed from the words of the contributors.

Although it also has no narrating voice, Picasso on Paper: virtual exhibition tour adopts a different strategy for its 40-minute tour. The galleries of the Royal Academy are shown with Picasso’s drawings, etchings and sculptures displayed on the walls and cases but emptied of the crowds.

A restlessly panning camera prowls explores the rooms and the artworks. As a viewer you get a good idea of the spaces of the exhibition, and each section is introduced by a version of the appropriate wall text. At times, the frame comes to rest on one or more artworks, and these are identified by title, date, medium and the institution that made the loan. But every shot appears nervous of lingering for even a moment, and throughout there is a music track of generic easy listening presumably sourced from a library.

In another world my irritation would almost certainly have been greater because of just how inappropriate the audio is, but as I viewed I was content simply to press mute. The most striking aspect of the film is the absence of a presenter — or even a narrator. Refreshingly, chronology and interpretative directions come solely from the captions. At least judging from the comments beneath the video on Youtube, this distinctive approach seems to be appreciated by viewers, of which in this context since 8 April there have been more than 22,000.

Our on-screen guide round the Ghent exhibition of Jan van Evck is art historian Till-Holger Borchert, a welcoming and friendly, somewhat portly gentleman who is pleasingly less polished than a Sooke or a Schama. He coaxes the camera to look at aspects of the astonishing masterpieces of the Northern Renaissance. And the frame responds to his guidance, concentrating on specific details with only the most subtle of moves across, towards or away from the artworks. Music is used sparingly between the panels, as a bridge when we move within the space of the galleries and not as a means of (supposedly) enhancing the affect of the artwork.

The pacing of the Van Eyck film is slower than that of either the Titian or the Picasso study, but it still feels much too fast. There is no time to stand and stare – although of course there is the option of pausing the video and/or of seeking out a still image of any particular artwork. With Van Eyck this is pleasingly (and almost uniquely) possible thanks to the still-astonishing Closer to Van Eyck website which features high resolution digital reproductions of the artist’s paintings, including the restored Ghent Altarpiece. Zooming in on details and on the craquelure of works is dazzling and dizzying, and while hardly a substitute for a visit to Belgium is nonetheless to be highly recommended.

Closer to Van Eyck operates with a quite different temporality for an exploration of the artist’s work and world, as does the alternative way of visiting ‘Van Eyck: An Optical Revolution’ via the exhibition’s audio guide and stills. Following the Covid-19 enforced closure of the show, MSK posted the whole recording along with a transcript and a generous selection of stills. Together with the video as a kind of taster-tape, this guide gave me a strong sense of being in the rooms in Ghent and it offered an engagement with the works that prompted my aesthetic appreciation in a way that neither the Titian or the Picasso films did.

Which makes me all the more interested in looking for other distinctive digital presentations of exhibitions or permanent collections, and I’ll highlight a selection of the ones I’ve found in a next post. But I’d also welcome recommendations in the Comments below or via Twitter @Illuminations.