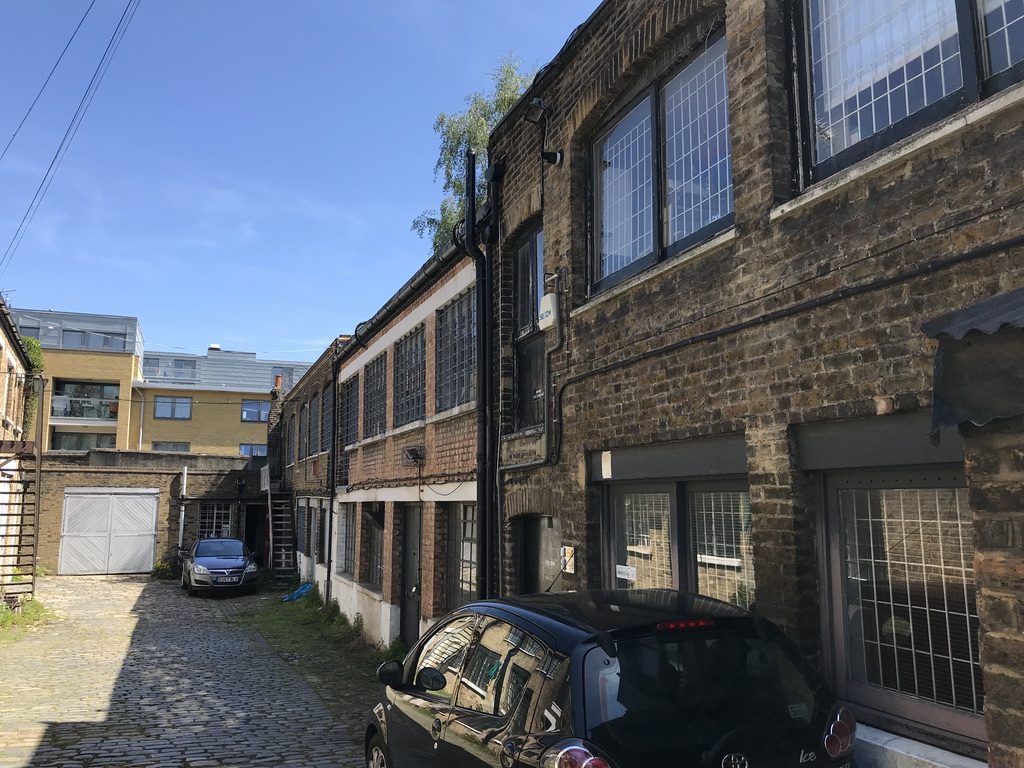 John Wyver writes: On Friday this week, after 30 remarkable years, we leave our beloved offices in Islington’s Rheidol Mews. Above is the view that has greeted some of us each day for three decades, and below is a glimpse of the chaos that we are currently living through – along with our accountant Kay and colleague Tom. We are moving to a new space a mile or so away at ScreenWorks, from where we’ll be working from Monday onwards:

I’m going to start contributing some thoughts and memories about this space – and I’m also going to encourage Linda, who has been here as long as me – and who found the space originally – and others to add their own recollections.

We came to Rheidol Mews in July 1989, after a couple of years in Newman Passage, close to the first offices of Channel 4 in Charlotte Street. There we produced State of the Art, 1987, and two series of Ghosts in the Machine, 1986 and 1988, but by the time we arrived in Islington much of our focus was on archive programming for Channel 4, including The A-Z of TV (1990), 1001 Nights of TV (1991) and the 13-week series TV Heaven (1993). We made four series of The Net for BBC Two here, four series of the arts series Tx. for the same channel, as well as a host of single documentaries and performance programmes for British broadcasters. We created ambitious series for the US, including Artland USA and Art Race, and we co-ordinated the UK end of the online Fathom project for Columbia University. And since around 2000 we have tried to find complementary and alternative ways of working, alongside the shrinking broadcast market for arts programmes, all the time trying to create distinctive and interesting media.

At different times we have occupied a host of different rooms and spaces in the Mews, including on the opposite side, where we set up two editing suites and a lovely meeting room. That was where I recall watching the horrifying live coverage of the events in New York on 11 September 2001. But there are many happier memories too, including a glorious summer’s evening when we took over the whole of the Mews for a party. We spawned three spin-off companies here: Illuminations Interactive, Illuminations Films and Illumina. And we did really early work combining broadcasting with the web and with innovative 3D social spaces on projects like The Mirror, Ages of Avatar and Heaven and Hell- Live.

One of my most vivid memories is of watching the first episode of the first series of The Net in – I guess – the autumn of 1994. (Our new office, and the clear out of so much of our accumulated papers, should give us the opportunity to detail our history rather better than we do at present.) I have always claimed that this was the first British television programme to include an e-mail address in the closing credits. Which is what we did, featuring what we believed to be our recently opened Compuserve account.

The production team watched the show together and then went on to the pub. At 11pm a handful of us came back to the office to see if we’d received what we thought might be half a dozen mails. In fact, there were more than 600 responses in our mailbox – many of them pointing out that (a) we had managed to omit the “@” symbol from the address, and (b) that they were nonetheless sufficiently digitally savvy to be able to mail us anyway. That was a kind of “Eureka!” moment for me, when I realised that the whole relationship between producers and viewers was going to change fundamentally. As indeed has proved to be the case.