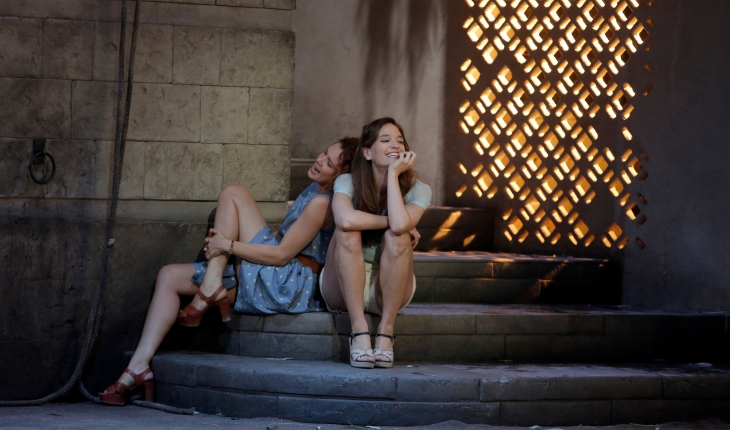 On Wednesday the Guardian reported that the Edinburgh Festival was offering a refund to opera lovers who had purchased tickets for Christophe Honoré’s production of Così fan tutte (above). First seen at Aix-en-Provence earlier this month, the production is apparently a “provocative and sexually explicit take on Mozart’s opera” that “contains adult themes and nudity”. Moreover, Honoré has set Mozart’s tale of amorous couples in Eritrea in the late 1930s, when the east African country was colonised by Mussolini’s Italy. At the Festival’s website is an informative page with full credits, more information and further photographs.

In a New York Times review (which the Edinburgh Festival has also sent to ticket holders), Zachary Woolfe described the production as ‘a dark, demanding staging that speaks all too clearly to our time’; and he wrote

Honoré’s staging is, for whites – that is, for almost everyone watching here – often a brutal, shaming experience, as the black Africans onstage are shoved, dragged, ground against and used as avatars, fantasies and objects, encountered as spurs for white imaginations rather than as people.

Which makes it sound deeply intriguing. All the more welcome then that, for those of us who can’t get to Edinburgh, an excellent three-hour recording made in Aix by the French television channel ARTE is available online.

ARTE offers me the option of embedding the recording here, but slightly annoyingly it starts to play as soon as you open the page, and I’m not sure how long it will remain online. It also seems to slow down our site, so I’m foregoing that option – and will simply content myself with encouraging you to watch via the link. ARTE has a wonderfully enlightened policy of both recording major opera, dance and theatre productions and also making them freely available online, including some broadcasts to viewers outside of France. There are frequently glories to be found at their site, like Karamazov directed by Jean Bellorini for the Avignon Festival and a programme of four works choreographed by Georges Balanchine to music by French composers, recently performed in Paris by New York City Ballet.

For those interested in opera across Europe, The Opera Platform is an essential resource, and currently among its rich offerings is Katie Mitchell’s production for the Aix-en-Provence Festival of Claude Debussy’s Pelléas and Mélisande, a recording that was also made by ARTE France. Below is the embedded version of that, and I’ll return to write more about The Opera Platform next week.