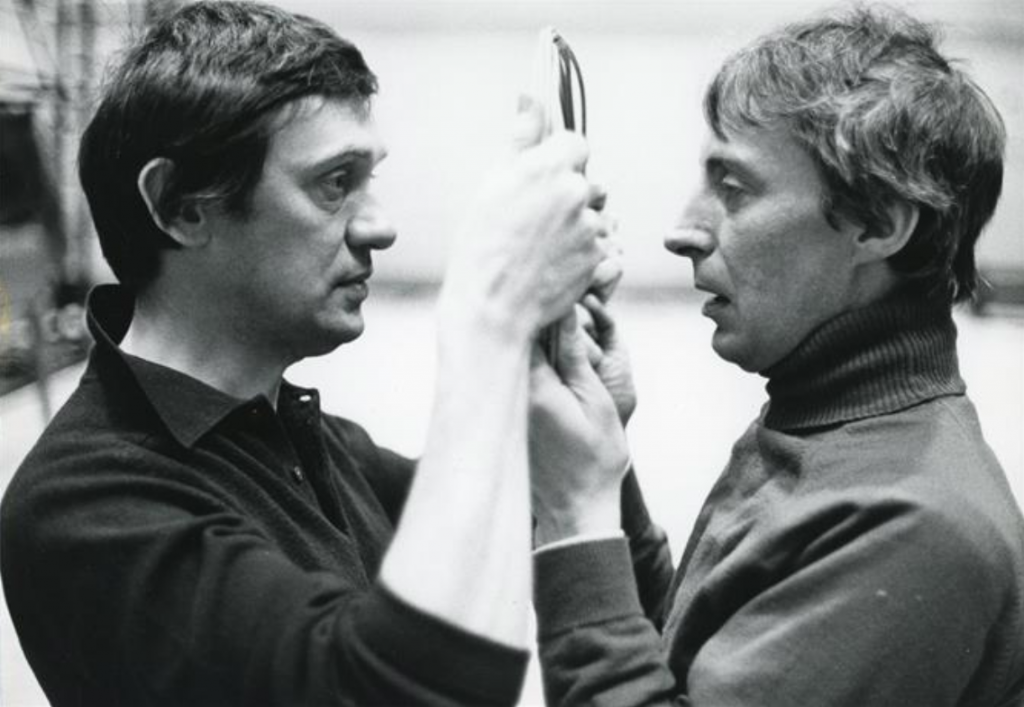 I remain very grateful to an e-mail correspondent (and careful reader of the hardback) for drawing to my attention a major performance recording that I knew nothing of as well as two documentaries of interest. The former is a screen version of Peter Nichols and Monty Norman’s musical Poppy, mounted by the RSC in 1982 as one of its first productions in the company’s new theatre at the Barbican. For the book I wrote briefly about a BBC Omnibus item that featured two of the show’s numbers re-staged in the television studio, describing it as ‘perhaps the lowest moment of the RSC on any screen anytime anyplace’. But I had no idea that a broadcast-quality recording was made of the full show.

The two-hour recording was made in late 1983 or early 1984 after the production’s transfer to the Adelphi Theatre. It was directed for the screen by David G. Hillier who marshalls shots from what I guess to have been five fixed cameras in the auditorium. Hillier worked extensively in entertainment television in Britain throughout the 1970s, ’80s and ’90s, helming numerous episodes of Top of the Pops, Parkinson, Jim’ll Fix It and more, as well as being the first director on Teletubbies. The production team also appears to have been composed of stalwarts of production in Britain, including vision mixer Carole Legg, and post-production services were provided by the London house Complete Video.

The producers, however, were American, and the final on-screen credit is ‘A IFPA production for Almi Television Productions’. The Almi Group, headed by Michael Landes and Albert Schwartz (listed as executive producers on the Poppy recording) was a substantial entertainment conglomerate involved, as an October 1986 Billboard news item tells us, in ‘motion picture and television production and distribution, video games and vending machines, and a chain of videocassette rental and sale outlets.’ At that point, the company had recently sold its cinemas, operating under the banner RKO Century Warner, to Cineplex-Odeon.

There’s a focus here for further research, including possible connections via the RKO company as a co-producer to the 1985 Channel 4 production of the RSC’s Cyrano de Bergerac. My guess is that Almi were exploring the potential of stage productions for the developing cable television market in the States. As to who owns the Poppy screen version now, where the master might be, and what rights complexities are involved — well, all of that is as obscure as are so many questions about moving image archival survivals. Should anybody know any more, do please be in touch.

My e-mail correspondent also drew my attention to the documentary Refuse to Dance: The Theatre of Howard Barker and to screen extracts from the RSC’s notable 1973 production by John Barton of Richard II. In the latter, famously, Richard Pasco and Ian Richardson alternated the title role and that of Bolingbroke (as above, in Donald Cooper’s iconic photograph). The half-hour programme including the extracts, of which only a brief (out of sync) part is freely accessible online, was, I believe, made in 1974 for the CBS/PBS arts series Camera 3. This was when Richard II was at BAM in Brooklyn – and needless to say I want now to track down a full copy.

Refuse to Dance: The Theatre of Howard Barker is better-known than the Camera 3 production, and (not least because I have seen it in the past) I ought really to have included it in the book. It’s a 50-minute film documentary made for the Arts Council alongside the RSC’s 1985 season of Barker’s plays in The Pit at the Barbican. As the Learning on Screen database entry notes, the film ‘juxtaposes extracts with comments from actors, directors and critics. Includes segments of Don’t Exaggerate, The Castle, No End of Blame, Scenes from an Execution, Downchild and Played in History.’ Contributors include Harriet Walter, Maggie Steed and Penny Downie, but not Howard Barker himself, who elected not to appear on screen.

There is one further documentary that I definitely ought to have acknowledged in the book. On 12 February 1979 BBC Two’s arts magazine series Arena profiled Jane Lapotaire when she was performing in the RSC production of Piaf, written by Pam Gems and directed by Howard Davies. Here’s how Radio Times trailed Dennis Marks’s film:

The sell-out success of this year’s Royal Shakespeare season at Stratford is the musical, play. Piaf. Jane Lapotaire, television’s Marie Curie , has won universal critical acclaim for her performance as the great French singer. Tonight Jane Lapotaire talks about imitating the inimitable.

This Arena film, which I can access, deserves its own post, and that will follow here soon. In the meantime, enjoy Jane Lapotaire singing ‘La Vie en rose’ in this extract from the HBO screen version of the show which was recorded when it transferred to Broadway.