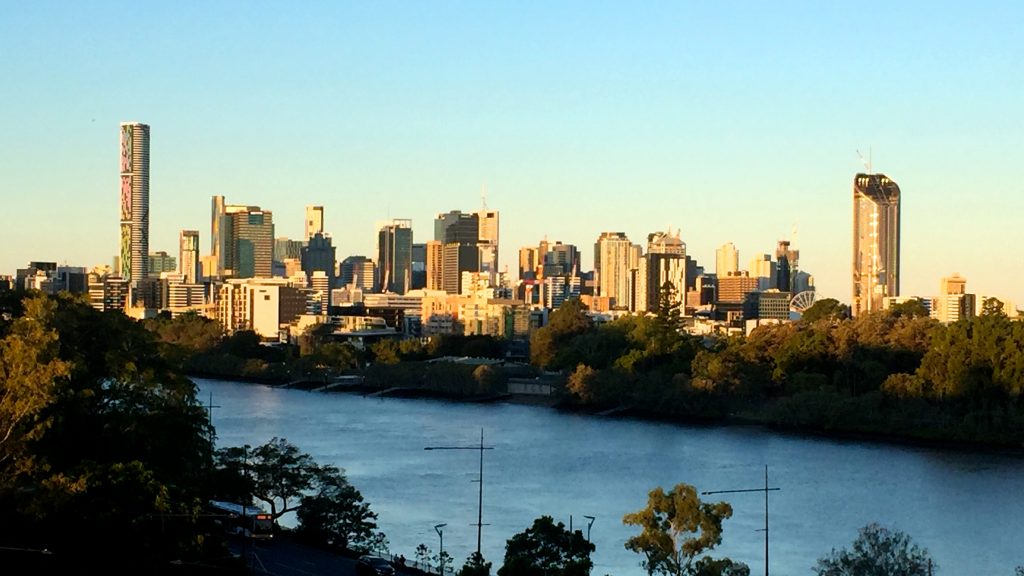 Or, a post in three chapters. I have been in Brisbane for just about a week now, and I think it’s fair to say that, despite the weather having been so-so, I’m a little bit in love with the city. Built on either side of the Brisbane river, it feels human and humane. I’m a big fan of the sweeping riverside paths that divide bikeways from pedestrians. And I’m enormously enthusiastic about the vaporetto-like council-operated CityCat water buses that speed from landing stage to landing stage. Plus, there’s free wi-fi right across downtown. I was invited here by the University of Queensland, and that’s the focus of chapter 2 below, followed by a strange – and I hope entertaining – tale of my day off yesterday in chapter 3. But first, a mention of the city’s two exceptional art galleries.

Chapter 1: art in the city

On the south bank of the river in two elegant buildings separated by the State Library sit the Queensland Art Gallery (QAG) and Gallery of Modern Art (GOMA) – or together QAGOMA. GOMA, currently celebrating its tenth birthday, has a major Cindy Sherman show, as well as a showing of works donated to the gallery by Tim Fairfax – which to my eyes mostly appeared over-blown and a bit obvious. The café downstairs, however, has much to recommend it.

As an elder sibling, QAG is operating with a number of its galleries closed thanks to ongoing renovations. But even so it offered a host of surprises and delights. The gallery has made the most of having almost all of its Australian collection in storage by devoting just one space to a handful of works. Six of them are honoured with a standard hang, including Godfrey Rivers‘ Under the jacaranda, 1903, a luminous urban scene of extraordinary beauty (which is explored here in a short video). 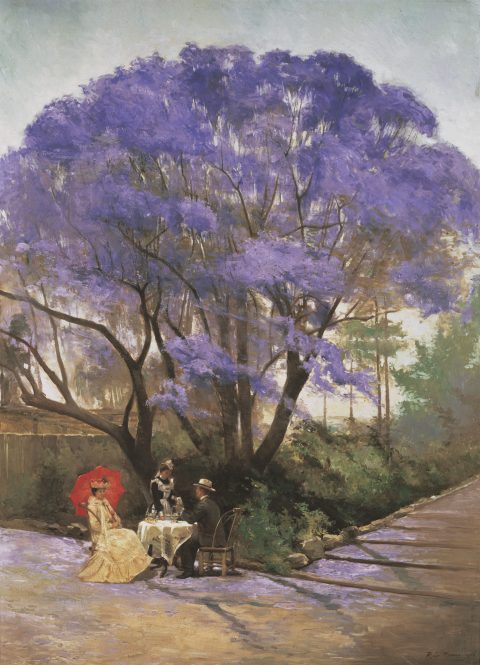 One wall of the same space has a salon-style display of other highlights from the collection, together with both printed and electronic displays identifying the works and providing context. The display is titled Moving Pictures: Towards a Re-hang of Australian Art, and the background to it is outlined in this blog post. I found this to be a really imaginative and engaging way of coping with the constraint of having galleries temporarily off-limits. 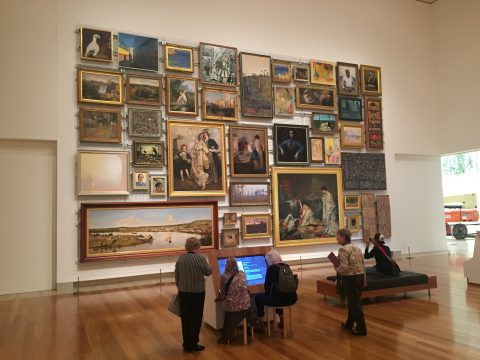 Next door, as part of the display of the permanent collection of Asian art, was the revelation of the day for me – a grouping of perhaps twenty or so photographic prints by the Indian modernist photographer Nasreen Mohamedi. Given that there have been recent retrospective shows devoted to her work at Tate Liverpool, Museo Reina Sofia in Madrid and this summer at The Met Breuer in New York, there’s really no excuse for my ignorance of her exquisite and complex, near-abstract images, but I’m delighted to have discovered her now. There’s a little more background in this short video from New York:

The reason I have been in Brisbane is that I was invited by the University of Queensland (UQ) to be this year’s  Lloyd Davis Visiting Fellow. This fellowship was established as a memorial to a much-loved colleague who died prematurely in 2006. The formal part of the visit involved a public lecture about Shakespeare, television and live cinema, and two classes, one of which was primarily about British television, especially the history of Channel 4.

For the other class I collected together 8 versions of the St Crispin’s Day speech from 8 screen adaptations of Henry V: Olivier’s in 1944, Branagh’s in 1989 and The Hollow Crown from 2012; three BBC television productions from 1957, 1960 and 1979; and the stage-to-screen versions from Shakespeare’s Globe, 2012, and the RSC, 2015. A dozen of us spent a richly interesting two hours and more comparing the performances but also the formal choices about framings, camera movements, edits and the like. I found it a very productive exercise.

Alongside these events I saw again some colleagues on the faculty and met some new ones, and had numerous stimulating discussions over drinks and a meal or two. I had a wonderful time and have come away with new friends, reading recommendations and even an idea or two for further collaborations.

Having completed everything at UQ, I had decided as a kind of treat to drive down the coast and spend the night somewhere nice. The post-hippy resort of Byron Bay was recommended, but I couldn’t find anywhere interesting to stay – almost everywhere was taken. But I found this amazing looking lodge in the mountains on the way, on Tamborine Mountain, called Bungunyah Manor Resort. And they had a room free. (Several of them, as it turned out.) 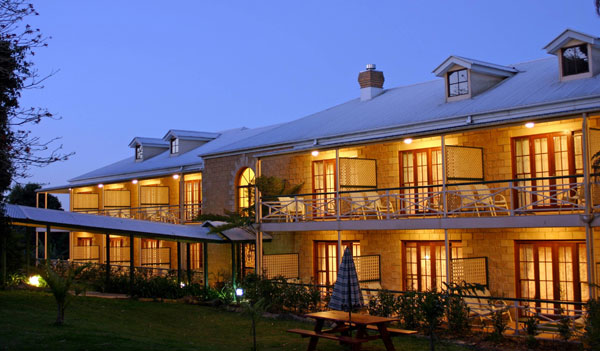 On Friday I picked up a little car and drove first to and through Surfers Paradise, just to have a look at “Brisvegas”, and then on to Byron. Which is really nice, if you like the seaside, sand and surfing, although it was exceptionally windy and clearly going to rain later. But I had a very tasty portion of upmarket fish and chips and set off back towards Brisbane before turning off the motorway to Tamborine.

By the time I got to Tamborine it was nearly 5pm, it was raining heavily, mist was obscuring what are supposed to be amazing views, and it was getting dark.

But I found Bungunyah, left the car in an oddly empty parking area, and walked through to reception. On opening the main door I found a hall entirely decked out in lavish Victorian Christmas decorations. A huge Christmas tree, presents, baubles everywhere, bouquets of holly, the works. Apparently they do a very successful “Christmas in July” package every weekend in July and August, and the decor had not yet been removed. 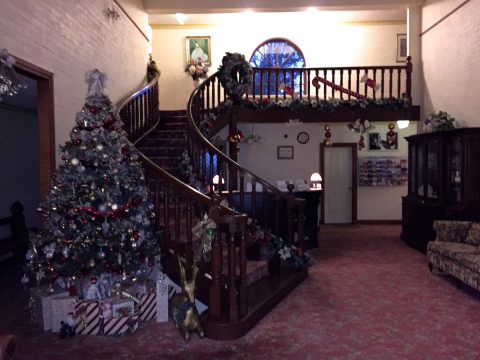 The place was originally constructed in 1882, then knocked down and built again in the 1920s, and is a pretty fair facsimile of a Victorian hotel – which the present owners have reinforced with furniture, pictures and everything else from the period. Maybe I romanticised the offer, but my sense was that the web page had promised a upmarket French restaurant and a bar with a blazing fire. But…

There was no-one there. Absolutely no-one. No-one on reception, no staff and seemingly no other guests. Instead there was a little welcome note with a phone number and my keys, plus a message to say there were restaurants in the nearby town and cafes for breakfast tomorrow.

It was truly weird. All a bit too much like The Shining. And what’s more my room was number 13.

The room was suitably Victorian, but smelt a bit of damp. The balcony was ruled out because of the rain. And most of all I felt like it wasn’t the place I had imagined curling up with a glass of wine and my very good book (Armadale by Wilkie Collins.)

The thing that really did it however was the wi-fi. There was a signal but it needed a password. And try as I might, although there were written instructions about the TV, about the air-con, about saving water, about the plumbing, about switching off the lights, there was no sign of a password. I tried ringing the owner but only got voicemail.

At which point, and still having not encountered anyone at all, I was sufficiently creeped out – being in a hotel entirely on your own is truly strange – and sufficiently disappointed to make my excuses with a note and leave. The drive back took forever because of the rain and the traffic, but at least the building I was staying in is occupied by other people. And there is wifi. And the number of my room is 910.

So I fly home on Sunday with some great memories, new friends, ideas refreshed – and not a bad story.