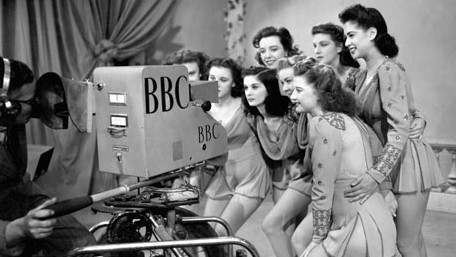 British Pathé has just published a wealth of new material on its wonderful YouTube channel (there is more about this from The Drum), and among the delights (only 5 views so far) is a newsreel spot about the return of the BBC television service after the second world war. The service, which had been operating since November 1936 from two small studios at Alexandra Palace (for more, go here and here), shut down when war was declared in September 1939. Although radio remained the BBC’s main focus in the early years of peace, television started again to broadcast the victory parade celebrations on 7 June 1946. This ‘exclusive’ Pathe report, which I’d not seen before, shows a rehearsal for an early broadcast with The Windmill Girls (also in the photograph above)- and it’s fascinating in all sorts of ways.

Let’s put to one side the objectifying male gaze that is shared by the television set-up and the newsreel camera. Although of course it’s interesting to see that this production context is an almost exclusively male world. A woman pianist tickles the ivories just out of shot, much as music was made on the earliest silent film sets, and next to her is a watchful companion. But otherwise all of the work is being done by men.

Traces of early television are rare (there are no recordings of full programmes until 1953), and this brief clip offers one of the best records of what making television involved in the early years of the medium. Note how small Studio B is, how basic is the background settings, how tightly grouped are the three cameras, and how the caption is a painted board which one of the cameras reveals before turning towards the action. Incidentally, the producer calling the shots is Cecil Madden, the BBC’s first head of television planning.