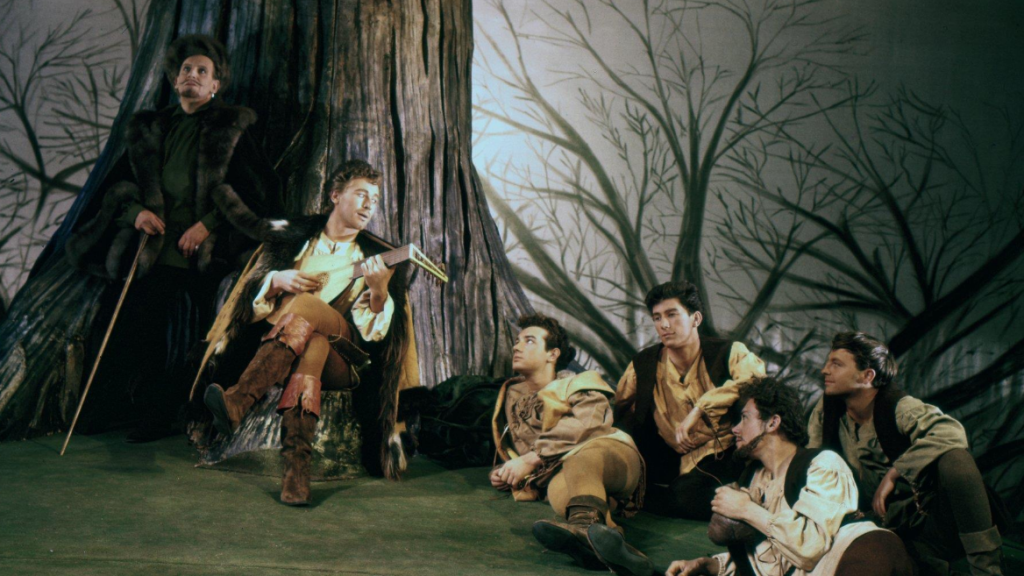 My book Screening the Royal Shakespeare Company: A Critical History is published this coming week by Bloomsbury as part of The Arden Shakespeare series. I own to being very pleased about this, and I am writing a series of posts that detail the contents chapter-by-chapter. A first post is here, and another here; more will follow in the next few days. The book’s second chapter, ‘Television Times, 1961-68’, looks primarily at the relationship of Peter Hall‘s newly renamed Royal Shakespeare Company had with BBC Television through the 1960s. The central case study is the still astonishing trilogy The Wars of the Roses, recorded in the autumn of 1964 and first broadcast at Easter 1965. Illuminations has published this series on DVD, which is available here.

In addition to The Wars of the Roses, the chapter also considers the other productions recorded under what was effectively the RSC’s output deal with the BBC: The Cherry Orchard, 1962; As You Like It, 1963; The Comedy of Errors, 1964 and All’s Well That Ends Well, 1968. All of these are extant, save only that we currently have the first half of All’s Well… but not the second. This was the first British television production of Shakespeare to be recorded in colour, and its rich hues and exceptional performances make it all the more regrettable that the second half is currently lost. There are other RSC-related fragments of television too, such as a fascinating Monitor item about John Whiting and The Devils, 1961. And in this second chapter, I also consider a rarely-seen version of John Barton’s anthology about England’s kings and queens, The Hollow Crown, which was filmed by British Home Entertainment for a planned pay-TV service that failed to establish itself.

Most of these BBC productions, as well as several that are lost – notably an outside broadcast from the Aldwych of part of Jean Giraudoux‘s Ondine, 1961, and a production of Marguerite Duras‘ Days in the Trees, 1967, with Peggy Ashcroft – were made under a remarkable deal with the BBC. The RSC and the BBC were discussing this as early as the spring of 1961 but the contract was only signed on 5 October 1962. It envisaged two recordings of company productions to be made in the current year and two in the next. The choice was by mutual agreement and the RSC received a management fee of £2,000 per production. The artists were paid separately, and the BBC could broadcast each recording twice. The BBC acquired international television distribution rights, but no provision was made for future media like DVDs and streaming – which is one of the key reasons why The Wars of the Roses and the other productions from this time have remained almost unseen. The deal was exclusive in relation to television but the company remained free to develop film productions (as Chapter 3 explores in much greater detail).

The Cherry Orchard, recorded in the television studio in the spring of 1962 is a fascinating production, both as a substantial trace of the precision and beauty of Michael Saint-Denis’ stage production and as a fine example of multi-camera drama from this time. Michael Elliott was the screen director, and he marshalls his camera brilliantly in the service of Chekhov’s text, Saint-Denis’ vision and the performances of, among others, Judi Dench, Peggy Ashcroft, John Gielgud, Dorothy Tutin and Ian Holm. Part of the production can be seen here:

Michael Elliott, who was one of the few directors in the 1960s who was at home on stage as in a television studio, director the Stratford production of As You Like It that was recorded by the BBC early in 1963. This famous staging (in the Angus McBean header image, and highlighted in a beautifully illustrated online feature from the RSC), featured a luminous performance by Vanessa Redgrave (below), which more than fifty years later Michael Billington vividly recalled seeing in a Guardian feature. The BBC version is glorious – and demands to be made more widely available.

Clifford Williams’ delightful production of The Comedy of Errors was recorded on stage at the Aldwych, before an invited audience, and shown at the start of the year that marked the 400th anniversary of Shakespeare’s birth. The Wars of the Roses was also recorded on stage, albeit that of the RST in Stratford-upon-Avon, but the technique was quite different. Around 20 minutes of the mammoth trilogy were filmed every third day, with the time between occupied by camera rehearsals. The BBC’s head of single plays Michael Bakewell later reflected on the very different approach:

From the outset all those concerned were intent on finding a new way of presenting Shakespeare on television. Plays had been transmitted from the theatre frequently before […] but these presentations had been patently a theatre performance, observed in the way that outside-broadcast cameras visit a public event or a football match. What was intended for The Wars of the Roses was to re-create a theatre production in television terms – not merely to observe it but to get to the heart of it.

What I try to do in the book is detail how the unique strategy for recording a stage work resulted in a remarkable hybrid production that, at its best, is quite spectacularly good. Parts of this chapter are drawn from the research for this behind-the-scenes film that we made when we released The Wars of the Roses on DVD:

As for my other posts about the book, in Screening the RSC, 1, I introduced the book and outlined the arguments in the Introduction.

Chapter 1: in Screening the RSC, 2., I explored the early adaptation history of the RSC and its precursor Stratford companies, considering especially the 1955 broadcast of The Merry Wives of Windsor and a plan by Encyclopaedia Britannica to build a replica Shakespeare’s Globe on the banks of the Avon.

Chapter 3: Making Movies, 1964-73: the largely untold story of the RSC’s deeply problematic flirtation through the 1960s with the Hollywood producer Filmways, plus a consideration of three major adaptations directed by Peter Brook: Marat/Sade (1968), Tell Me Lies (1969) and the majestic King Lear (1971).

I’m thrilled that the Guardian recently featured an edited extract from Chapter 3, ‘Making Movies’, about three screen versions of Peter Brook’s 1970 A Midsummer Night’s Dream, including a Japanese recording, all traces of which were thought to have been destroyed.

Chapter 4: Intimate Spaces, 1972-82: exploration of the decade of Trevor Nunn’s television productions, including his great Macbeth (1979) with Judi Dench and Ian McKellen, plus the work that culminated in the wonderful adaptation for Channel 4 of The Life and Adventures of Nicholas Nickleby (1982), from which this is an extract:

Chapter 5: Toil and Troubles, 1982-2012: a chronicle of the years of strikingly few mainstream adaptations, whether for television or the cinema, but when archival recordings and more began.

Chapter 6: Now-ness, 2000-18: an engagement with Gregory Doran’s trilogy of BBC films – Macbeth (2001, pictured in the header image with Antony Sher and Harriet Walter), Hamlet (2008) and Julius Caesar (2012) – together with the RSC Live from Stratford-upon-Avon broadcasts, plus a few thoughts about the future.