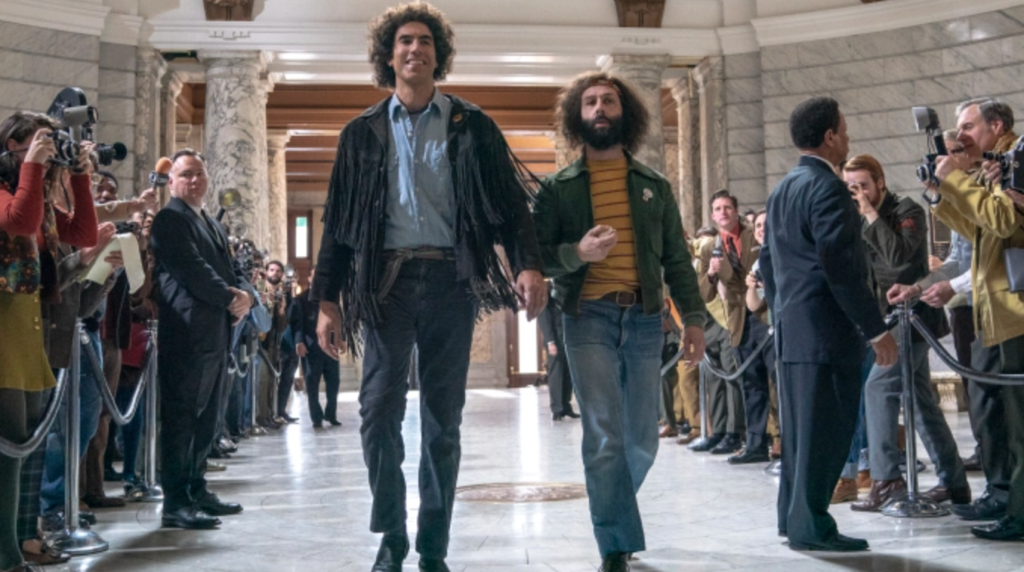 • The Trial of the Chicago 7 – Aaron Sorkin samples the menu: David Bordwell remains the critic whose writings I probably return to most often, and he is on dazzling form here on a film (header image, courtesy Netflix) that I enjoyed a great deal, but also ranging across Sorkin’s career, theatre and film, dialogue and construction, poetics and politics:

[A]rtisanal skill in a robust tradition is intrinsically worth analysis. That analysis can reveal new possibilities in what cinema can do. In The Trial of the Chicago 7 Sorkin creates a dramaturgy that embodies ideas in characters’ conflicts, changes, and hidden facets. Once more a theatrical premise has been turned into classically constructed cinema. Sorkin’s work offers one way that this tradition can stay fresh–not through shocking breakthroughs but by highly skilled reworking of schemas accessible to a broad audience. You know, the way theatre used to be.

• How Emma and The Personal History of David Copperfield reinvented classics for a modern age: brief reflections, co-ordinated by Tyler Coates for The Hollywood Reporter, on making costume drama for today; interesting, but like much of the current discussion of Bridgerton I feel there’s too little recognition that some strands of British television has been doing similar stuff for years.

• The blacks: a valuably grumpy response by David Cairns to the much-praised BBC Four series Mark Kermode’s Secrets of Cinema.

• Decadent London and the origins of cinema: a brilliant Ian Christie post for The Rimbaud and Verlaine Foundation about early cinema in London…

• Harry Short – a marginal life: … and an equally essential early cinema post from the learned Luke McKernan about our minimal knowledge of the man who brought film pioneers Birt Acres and Robert Paul together: ‘What you do not know about someone so often is that much more interesting than what you do know.’

• Long live the microcinema: for Criterion’s The Current, Nicholas Rapold’s wonderful essay about the vital edges of exhibition practice is evocative and engaged and exciting.

• The Hollywood escape economy is just around the corner: guarded optimism about the future of film from Janice Min at Time.

• ‘A dictatorship of numbers’: a terrific contribution by Matt Locke to his newsletter How to Measure Ghosts about public media and FCC Chairman Newton Minow’s landmark ‘vast wasteland’ speech about US television in May 1961.

• 74 miles from London: a revelatory post from A London Inheritance about signposts.

• Tearing the heart out of London: Ian Dunt at Politico with a lovely love letter to the capital.

• Max Porter’s The Death of Francis Bacon – a novelist takes on the painter’s final days: Johanna Thomas-Corr for New Statesman on Porter on Bacon.

• Point of no return [£, but limited free access]: also for Artforum, Alex Kitnick is productively provocative on the possibilities for museums in The After:

Hito Steyerl has written powerfully of what she calls the “poor image”—a digital file that is circulated, amended, shared, and cared for by many. What it loses in quality, in resolution, she claims, it gains in history. Now might be the time to imagine a “poor institution,” a place infiltrated by many that values community over control. What would a “poor” Whitney look like? A “poor” Guggenheim? A “poor” MoMA?

• Coventry v the wrecking ball – ‘We need gentle repair – not wholesale demolition’: spot-on from Guardian’s Oliver Wainwright about the threats to the marvels of Coventry’s mid-century architecture.

• On reading Robert Walser in lockdown Britain: Sophie Atkinson for Los Angeles Review of Books is thoughtful and delightful on encountering the German-speaking Swiss writer who died in 1956 on this island now.

• Almost eighty: glorious writing by the playwright Adrienne Kennedy composed nearly a decade ago just ahead of turning 80 and now published for the first time, via The Paris Review, as she contemplates being almost ninety.

• Among the insurrectionists: absolutely extraordinary reporting by Luke Mogelson for The New Yorker embedded with alt-right leaders ahead of the Capitol siege.

• We worked together on the internet. Last week, he stormed the Capitol: founding editor in chief of Buzzfeed News Ben Smith is contributing a series of exceptional columns, like this one, for his new employer, The New York Times.

• The Electronic Century with Gabriel Prokofiev: I am very much enjoying (and learning from) this Radio 3 trilogy with the musician and composer; part 1 on BBC Sounds now, the next broadcast tonight.

• And finally, this is really rather extraordinary – Tom Jones’ ‘Talking Reality Television Blues’, released this week: