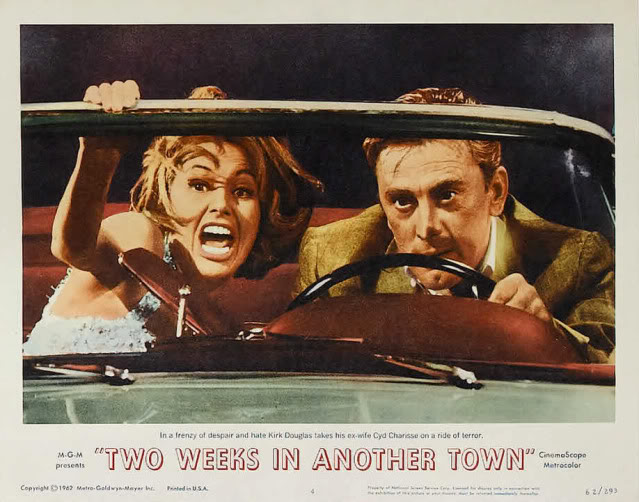 • Il Maestro – Federico Fellini and the lost magic of cinema: for Harper’s Martin Scorsese celebrates the work of another cinematic master, including La Dolce Vita which he recalls seeing in New York in 1961:

we watched a majestic, terrifying cinematic fresco unfold on the screen, and we all experienced the shock of recognition. Here was an artist who had managed to express the anxiety of the nuclear age, the sense that nothing really mattered anymore because everything and everyone could be annihilated at any moment. We felt this shock, but we also felt the exhilaration of Fellini’s love for the art of cinema—and, consequently, for life itself… That picture was a galvanizing experience, like a shockwave that passed through the whole culture.

• Stars in Your Eyes – the 50s musical saluting actors in a crisis: Chris Wiegand for the Guardian on a fascinating 1956 musical (recently released for physical media by Network in a restored version) about theatre, cinema and television in the mid-’50s – I very much want to write more about this film, so watch the blog for a post, but in the meantime here’s the truly bizarre original trailer:

• A note on Two Weeks in Another Town: obsessive cinephilia of the very best kind by José Arroyo celebrating Vincente Minelli’s 1962 feature (above) with a host of beautiful images and some revelatory clips.

• Wong Kar Wai’s needle-drops – a journey through his melancholic soundscapes: Kambole Campbell on the music of the movies, currently streaming on BFIplayer.

• The BBC and the battle for truth: a detailed, nuanced article for New Statesman by Harry Lambert about news, balance and bias.

• Play for Today: The Bankrupt: the Forgotten Television Drama blog edited by John Hill continues to do a fine job posting detailed essays about individual editions of Play for Today, as with this new – and exemplary – contribution by Jonathan Owen about David Mercer’s only original scfript for the series.

• Who is still buying VHS tapes?: Hannah Selinger for The New York Times on the robust marketplace for the format.

When I looked through the book in advance of the opening, I had reservations about the project. Most of the 37 Black artists included are familiar and widely exhibited, as are some of the individual works. I wondered if the show, even with the gravity of its theme, wouldn’t end up feeling, basically, like not much more than a reaffirmation of a contemporary art canon, a cavalcade of stars.

But curating, at its best, is far less about singularity than it is about synthesis, about the alchemy of bringing things together to ignite and amplify ideas. Enwezor had a genius eye for such creative fusion, and it has produced exceptionally moving results in an exhibition that will surely rank as one of the most important of 2021.

• Matters of note: Luke McKernan on We Are Bellingcat, by Eliot Higgins, but most of all on urls as endnotes, making the key point that ‘print and digital do not mix.’

• Eeek!: I know we’re all tired / confused / frustrated with reading about the virus(es) almost as much as we are with living with them, but this short-ish Rupert Beale piece for LRB (with a headline that’s all the better once you know what it refers to) is thoughtful and authoritative – and somewhat hopeful.

• Digital Premiere—Leila Josefowicz at The Met: my goodness, this is 45 minutes of gorgeousness: ‘classical violinist Leila Josefowicz performs two massive works for solo violin: Bach’s Partita No. 2 in D Minor, staged among masterpieces by Jackson Pollock and Mark Rothko, and a new work by Matthias Pintscher, written specifically for Josefowicz and commissioned by artist George Condo, presented in The Met’s sixteenth-century Spanish courtyard, the Vélez Blanco Patio.’