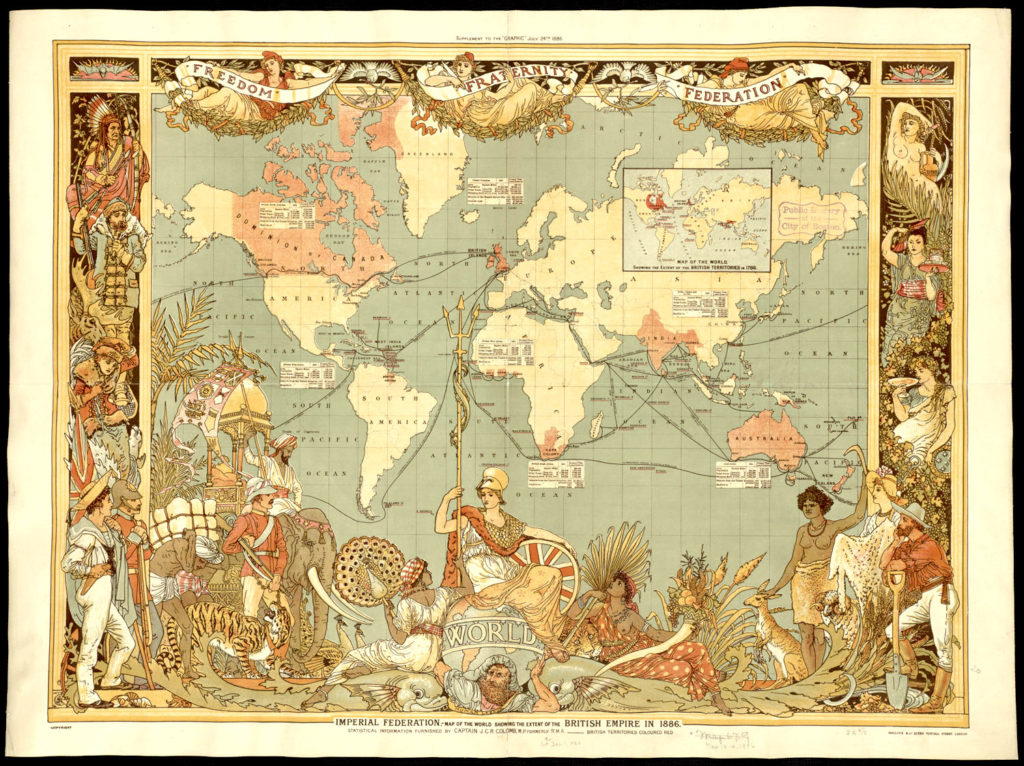 John Wyver writes: I was wrestling with some tech issues on Sunday, so this week’s selection was a touch delayed – apologies. But it’s in reasonable shape now. The first link will take you to one of the very best pieces I’ve read in the past seven days (and longer), a LA Review of Books article by Priya Satia, Raymond A. Spruance Professor of International History at Stanford University, and author of Time’s Monster: History, Conscience and Britain’s Empire, which I cannot recommend strongly enough. Then read Professor Satia’s sobering Twitter thread which follows.

• Fascism and analogies – British and American, past and present…

[Tory] nostalgia testifies to an urgent need to come to terms with the unpleasant reality of Britain’s imperial past. But the anxiety to distance that past from the moral abyss of Nazism and slavery frustrates efforts to do so. To urge Britain to reckon with its imperial past through reparations, school curriculum, restitution, memorialization, or other methods that Germany has also employed in confronting its Nazi past does not automatically imply an equation of British imperialism with Nazism. Different kinds of violent and racist pasts may yet share a common need for redress.

• Why can’t Britain handle the truth about Winston Churchill?: this by Priyamvada Gopal for the Guardian is a fine complement to Priya Satia’s essay.

• The Conservatives are now the party of England. Changing that will be hard and English politicians are waving the union jack, but its meaning is tattered and torn: two very good Guardian/Observer columns a week apart by John Harris.

• The populist delusion: writing for Prospect with passion and purpose, Jon Bloomfield and David Edgar lay out an ambitious programme:

The Conservatives suspect their coalition is unstable and that after four decades of neoliberalism the ground is moving against them. Hence their drive for a new populist model. In response, progressives need to avoid the traps set by our opponents, expose their inadequacies and weaknesses, and unite around a new social settlement for the future. Are we up to the task?

• The clown king – how Boris Johnson made it by playing the fool: if you haven’t read it already, catch up with Edward Docx’s brilliant analysis for the Guardian, including citations from Paul Bouissac, ‘the leading scholar on the semiotics of clowning’, and a close reading of Johnson’s novel Seventy-Two Virgins (published 2004):

The book is beyond merely bad and into some hitherto unvisited hinterland of anti-art. More or less everything about it is ersatz. Commentators who fall for his self-conjured comparisons to Waugh and Wodehouse miss the point entirely and do both writers an oafish ill-service. Because here again: Johnson is not seriously interested in writing novels at all. It’s not that he’s a fraud. Rather, as ever, he is a jester-dilettante peddling parody and pastiche.

• The end of closed democracy?: Anthony Barnett’s extended essay for Open Democracy is very good on where next for President Biden and the United States.

• Céline and Julie Go Boating – state of play: Jacques Rivette’s uncategorisable masterpiece was one of the first films I programmed for my university film society and I have loved it ever since; to celebrate a new release from Criterion in the States (with an Adrian Martin commentary track) Beatrice Loayza hymns its pleasures.

• Brand new day: a revelatory LRB essay by Niela Orr about the politics of The Wiz, 1978, the all-Black version of The Wizard of Oz:

While the director (Sidney Lumet) and screenwriter (Joel Schumacher) were both white, the music was mostly written by the Black lyricist and composer Charlie Smalls, and produced by Quincy Jones. It tells a story of Black freedom and resistance through boogie-woogie, disco, funk and soul.

• By us, about us, for all: why films by trans people matter for everyone: Thomas Flew for Sight & Sound at BFI Flare, writing on Rūrangi and Colors of Tobi.

• Sounds familiar: the secret history of US comedy on UK radio: for the Comedy Chronicles blog, Graham McCann pens an especially rich post about 1950s’ British plagiarism of US scripts, most especially on Life with the Lyons (1950-61).

• I looked through all 5,000 images in Beeple’s $69 million magnum opus. What I found isn’t so pretty: more on the art world, NFTs and the third highest-priced artwork by a living artist (which led this selection last week), by Ben Davis for artnet.

• Made You Look – a true crime doc that should terrify art collectors: for Apollo, Susan Moore reviews Barry Avrich’s film which ‘tells the story of “the largest art fraud in the history of the US” – a salutary tale of greed, hubris and the sins of omission as well as commission’; now streaming on Netflix.

• Essential arts – why Palm Springs’ Monroe sculpture is a #MeToo Marilyn: splendid from Christopher Knight for the Los Angeles Times on how ‘the return of a sexist sculpture is wrecking a downtown Palm Springs redevelopment plan’; the artwork in question is the truly tacky (and worse) 26-foot-high Forever Marilyn by Seward Johnson.

• Grand facades: an outraged Kristian Vistrup Madsen for Artforum is a delight on the Humboldt Forum in Berlin: first, ‘the Humboldt Forum is a bit like Donald Trump or Brexit: I don’t know a single person who thought it was a good idea’, and then ‘In the end, what we’re left with is an ugly building for an ugly time.’

• History from below: the second strong recommendation this week for a piece by Priya Satia, this is a lovely set of reflections for Aeon on the achievements and legacy of the great E.P. Thompson.

• The young political spaces of the internet: Nathan Taylor Pemberton for The New Yorker with researcher Joshua Citarella and the online politics of Gen Z; fascinating.

• Your face is not your own: with art by Zach Lieberman in an imaginative presentation, Kashmir Hill for The New York Times Magazine investigates Clearview and explores the ethics of facial recognition software.

• The great Sister Rosetta Tharpe was born 106 years ago yesterday; here she is with ‘This Train’ accompanied by Otis Spann on piano; this was recorded in France in 1964 – the audience! the cameras (and the confidence to hold and hold the close-up)! her smile! her guitar break! and her voice!:

Header image: Imperial Federation Map of the World Showing the Extent of the British Empire in 1886, colour lithograph published by McClure and Co., 1886; via flickr, courtesy Boston Public Library.