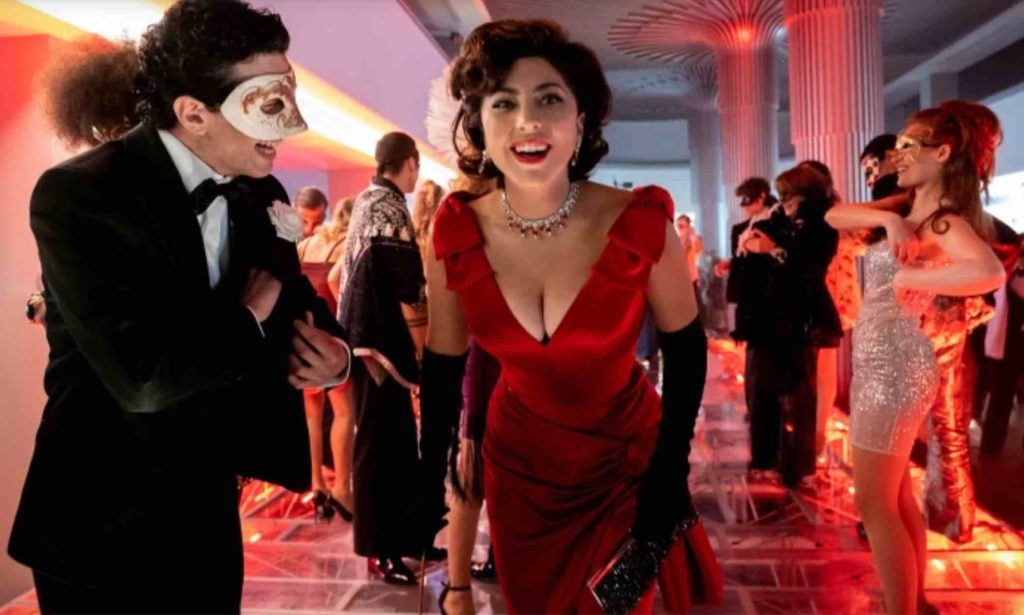 John Wyver writes: this week’s links. That’s it, that’s the introduction – apart from an expression of thanks to those in my Twitter timeline for some great recommendations.

• Overloaded – is there simply too much culture?: good to see Anne Helen Petersen writing for the Guardian, and with a question I feel sure we’ve all asked ourselves.

• Céline Sciamma: ‘My films are always about a few days out of the world’: Xan Brooks for the Guardian interviews the director whose much-anticipated Petite Maman is out this week…

• Céline Sciamma: ‘I would love for someone to make this film into an anime’: … and Lillian Crawford talks with her for Little White Lies.

• Lady Gaga is dressed to kill in House of Gucci: I hugely enjoyed a preview screening this week of Ridley Scott’s latest (above, with Lady Gaga; image © Fabio Lovino/Metro-Goldwyn-Mayer Pictures), and Carola Long’s feature for the FT about fashion in the movie is a fine accessory – and here’s the very punchy trailer:

• How the roll out of BBC radio in the 1920s increased voter turnout in Britain: a fascinating post by Alex Yeandle for the LSE British Politics and Policy blog.

• 10 great American TV movies of the 1970s: Chloe Walker for the BFI with a list that engagingly highlights exactly what it says on the tin.

• A sense of history – Mike Leigh’s period cinema: Alex Ramon at the BFI on the director’s four historical films.

• “I wanted to tell these stories so that my mother could access them” – is Steve McQueen’s Small Axe cinema or television, and does it matter?: Christine Geraghty’s productive thoughts for CST Online.

• Pussy Riot: A Punk Prayer and Girl in a Band: Tales from the Rock ‘n’ Roll Front Line: for the latest issue of the open access journal Viewfinder from Learning on Screen, Alex Hastie and Michelle Newman respond to these two BBC Four music documentaries:

What these programmes demonstrate is the strength of original music documentaries to tell stories about music that resonate in ways that educate audiences about important topics: in this case, issues relating to gender and feminism. They also reveal something about the broader function of BBC Four as a vector for an actively produced public memory that encourages viewers to confront difficult histories in the present.

• Teenage dreams – my life as a soul boy: wonderfully evocative writing from Mick Brown for Esquire about growing up with Motown, soul and R&B; here he’s describing a night out at the Orchid Ballroom, Purley:

In the cloakroom, you’d check yourself out in the gilt-framed mirror. A sand-coloured, “Tonik” mohair suit: regulation three-button, single vent slashed 16in, narrow lapel, single pleat trousers. Hair back-combed from the crown and chopped and teased at the front. Like everybody else’s, it had been cut by Antoine, the gay (if closeted) barber in South Croydon. The smell was of Brut aftershave, even though you hardly needed to shave at all. You could hear the strains of music from the dance floor. You adjusted the knot of your tie, lit a cigarette and pushed through the swing doors, to be swallowed up in the tumult of sound and excitement.

• Along with many others, over the past months I have been enjoying – and learning from – the highly accessible Twitter threads by Paul Poast, an associate professor of political science at the University of Chicago; this one is about a subject that has been puzzling me for months…

• John le Carré’s last completed spy novel crowns a career attuned to moral ambivalence: I finished reading Silverview this week, and thought it a glorious conclusion to a series of 26 books that has been a companion for the past 40 years of my life. I went in search of writing on it, and was disappointed that there’s so little substantial criticism responding to it, although it may be too soon for major essays. But this thoughtful New York Times review by Jospeh Finder is well worth reading.

• The secret history of monopoly: the radical politics behind the genesis of the board game, by Steven B Johnson.

• Not cricket: Tariq Ali is very good for LRB on the sport’s racism scandal.

• Seeing Time: Lev Manovich on his oddly beautiful data visualizations of the progression of Time magazine’s covers from 1923 to 2009 (which is when he did the original research).

• Amazon’s spinmasters – behind the internet giant’s battle with the press: Paris Martineau for The Information with lots of remarkable (and scary) insights.

• Cryptodragons’ den – what is Paul Pogba selling and should we be wary?: for the Guardian, Max Rushden wonders if NFTs are the contemporary equivalent of the Panini stickers?

• Composer of the Week – Carla Bley: the BBC Radio 3 five-episodes-a-week series presented by Donald Macleod has been on a very welcome adventurous streak recently, with groups of programmes devoted to Julius Eastman and Sofia Gubaidulina, and this past week there was an excellent run, with Kevin Le Gendre as a guest, about the great jazz composer and musician…

•… and here she is with Andy Sheppard and Steve Swallow playing ‘Lawns’ at the Jarasum Jazz Festival in 2018: