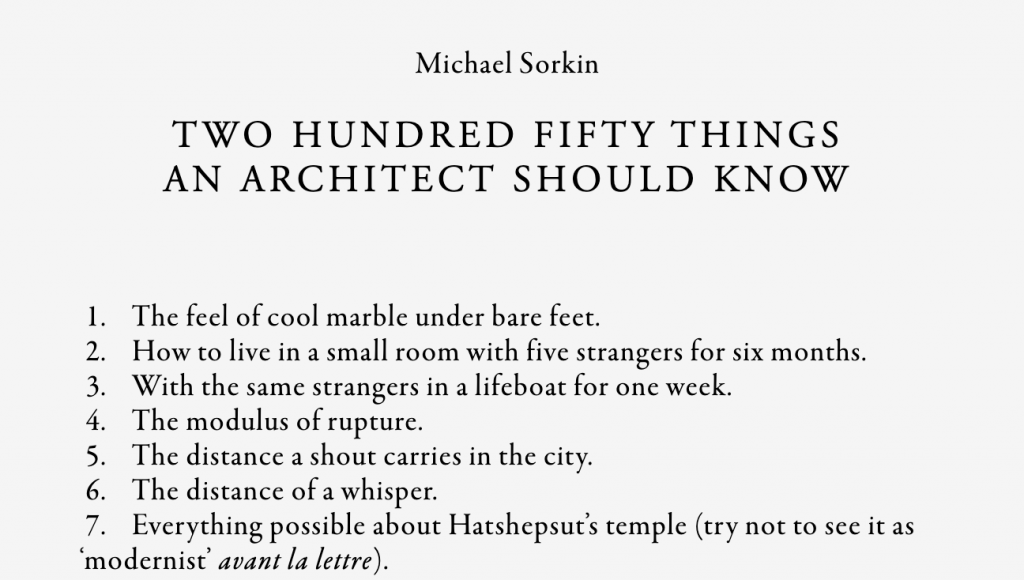 • Two hundred fifty things an architect should know: the world this week lost the architect, critic and teacher Michael Sorkin to Covid-19 – this is simply wonderful by him, courtesy of Reading Design, and originally published in Sorkin’s What Goes Up: The Rights and Wrongs to the City (London: Verso, 2018).

• A letter to the UK from Italy – this is what we know about your future: perhaps you’ve already seen this from the Guardian, but it’s glorious, by Francesca Melandri from Rome:

You will not understand if witnessing the birth of a new world is more a grandiose or a miserable affair.

• That discomfort you’re feeling is grief: I found this helpful – for Harvard Business Review, Scott Berinato talks with David Kessler, ‘the world’s foremost expert on grief’.

• Is the death of an elder worse than the death of a young person?: the headline is not precisely what the article is about (indeed the link shows it was originally titled ‘The death of our elders, not the young, is the worse loss’, but this is a wise contribution to Aeon about mourning and friendship by Amy Olberding, Presidential Professor of Philosophy at the University of Oklahoma.

• The great empty: a simply breathtaking visual essay by photographers for The New York Times, with an introduction by Michael Kimmelman.

• Coronavirus timeline – how the world will change over the next 18 months: Chris Stokel-Walker for Esquire looks tentatively into the future.

• Trapped – low-budget flash is good for you: David Bordwell on the 1949 thriller directed by Richard Fleischer (recently released in a restored version by Flicker Alley) which exemplifies his enthusiasm for ‘minor genre films [that] could get flashy, displaying weird plot turns and wild visuals.’ See also Trapped and the pleasures of B noir by Sara Imogen Smith.

• Leave Her to Heaven – the eyes of Ellen Berant: for Criterion, Mega Abbott on Gene Tierney in John M Stahl’s 1945 melodrama.

• Roger Deakins in ten shots: this is great – a selection of the peerless cinematographer’s work by Joshua Rothkopf for Sight & Sound, including that for this masterpiece (the word is not used lightly) of the American cinema:

• Robespierre’s chamber pot: from the latest LRB, Julian Barnes on Huysman’s Modern Art, nineteenth-century Paris, the Salon, French Impressionists and so much more.

• Rachel Cooke on criticism – ‘What is the point of a critic if not to tell the truth?’: a spirited and valuable defence of informed critics, from the Observer.

• Six paintings in search of an audience – on Titian’s poesie at the National Gallery: from Apollo, Matthias Wivel writes beautifully on opening a show that closed after three days:

Several years of delicate diplomacy, scholarly enquiry and complex logistics – and many more of dreaming that this reunion might happen one day, for the first time in centuries – were coming to fruition just as they were about to be dashed by a force beyond our control. Prepared by the fatalism of the poesie – their empathetic visualisations of the dramatic twists of fortune – it almost felt natural that things were happening as they did.

See the National Gallery’s website for more on the paintings (although frustratingly the video was not working when I tried to play it).

• What Shakespeare teaches us about living with pandemics: very fine words for The New York Times from the exceptional Emma Smith:

Shakespeare is not interested in the statistics — what in his time were called the bills of mortality. His fictions reimagine the macro-narrative of epidemic as the micro-narrative of tragedy, setting humane uniqueness against the disease’s obliterating ravages. His work is a cultural prophylactic against understanding disease solely in quantitative terms, a narrative vaccine.

The New York Times complement’s Emma’s article with this scene from the 2017 RSC Live from Stratford-upon-Avon recording of King Lear, directed for the stage by Gregory Doran with Antony Sher as King Lear and Oliver Johnstone as Edgar, and directed for the screen by Robin Lough.

• W.H. Auden was a messy roomate: this is a joy – Auden biographer and professor of English at Oxford Seamus Perry writes on the living quarters of the poet; excerpted in The Paris Review from Lives of Houses, edited by Kate Kennedy and Hermione Lee.

• Fin de Partie: a coirnucopia of screen performance has been made available for free, of highlighted as such (as here and here, from the Guardian, and for opera here from bachtrack), over the past week – this must be amongst the strangest and most challenging: Raiplay’s two hour-plus 2018 recording from La Scala, Milan, of György Kurtág’s single act operatic adaptation of Samuel Beckett’s Endgame, staged by Pierre Audi.

• Bob Dylan – ‘Murder Most Foul‘: Richard Williams, via theartsdesk.com and originally published on his blog thebluemoment.com , on Dylan’s first new song in 8 years:

This is the author of ‘Desolation Row’ populating a 17-minute song with a lifetime of remembered cultural fragments, zooming out and panning back and forth from the single pivotal event of the Kennedy assassination, plucking references out of the heavy air.

• Why the landscapes of post-war infrastructure matter: in the Spring edition of Landscape, viewable (slightly clunkily) via the link to Issuu, pp 6-11 are taken up with a really interesting piece about a research project at the Manchester School of Architecture – and there’s more here.

• Broadway is shuttered but its buildings sing – a virtual tour: New York Times architecture critic Michael Kimmelman (see above) looks at Manhattan theatre exteriors with architect and stage designer David Rockwell – it’s a piece that is both enlightening and rather moving.

• An outside chance: exceptional writing for New York Review of Books from Fintan O’Toole on Bernie Sanders.

• Always narrating – the making and unmaking of Umberto Eco: on the great Italian author, and on conspiracy theories especially, by Costica Bradatan, for LA Review of Books.

• A Bit Lit: the estimable Andy Kesson, and the no less very fine Callan Davies and Emma Whipday, have responded to the current isolating world by starting a Youtube channel of informal conversations with academics –about the early modern world, contemporary issues and much more; it’s a bit like ear-wigging on the erudite by a water-cooler; this is Andy’s chat with Suzannah Lipscomb, professor of history at the University of Roehampton, speaking about archival research, sixteenth-century history, television and gender.