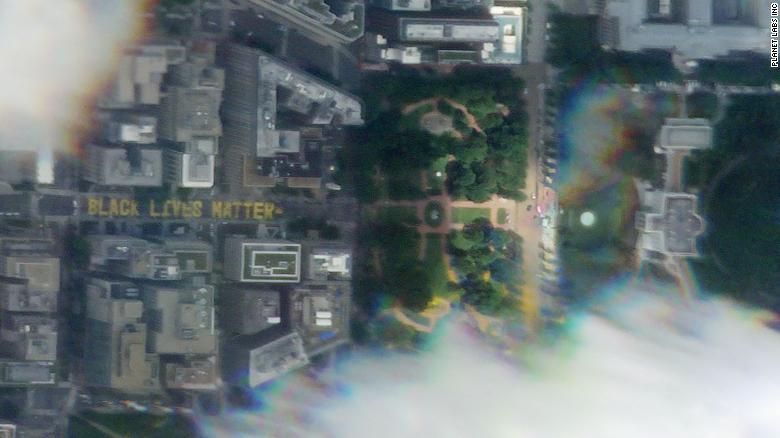 John Wyver writes: These are some of the things that have engaged me over the past extraordinary, historic week. The selection starts with four essential analyses, and with a powerful video made by actors who have worked with the RSC in recent years. Above, the Planet Labs image from an orbiting satellite of the centre of Washington DC with the glorious two-blocks-long mural ordered by Mayor Bowser on the street leading up to the White House.

• History will judge the complicit: Anne Appelbaum for The Atlantic.

• Why we can’t stop thinking about George Floyd’s neck: Soraya Nadia McDonald for The Undefeated.

• 10 great Japanese film noirs: Matthew Thrift makes his selection for BFI, and here’s a glimpse (thanks to Criterion Collection) of the work of one of the directors he highlights, Seijun Suzuki…

• Sex, movie stars and me – confessions of a 1970s script girl: Susanna Moore on work and sex in Hollywood with Warren, Jack, Dick Sylbert and more, in The Times – endlessly quotable, including this:

Warren required that anyone who worked for him, or who was a friend like Bob [Towne] or a girl whom he was chasing or had chased or would someday chase, be in constant touch with him, which meant 10 or 12 phone calls a day to him, often from a pay phone. There was no need for conversation, as all he wanted to know was what you were doing, where you had been, where you were going, and if you’d had sex with anyone since your last phone call.

• Edward Hopper and American solitude: for The New Yorker, Peter Schjeldahl on the art of a master.

• Charles Dickens: 150 years on, debate still rages over his ‘misogynist’ label: Professor of Victorian literature and print culture Cathy Waters on Dickens and women, for The Conversation.

• The long shadow of the Boer War: Andrew Glazzard for New Statesman on the three writers – Kipling, Conan Doyle and Mary Wesley – featured in Sarah LeFanu’s new book Something of Themselves.

• Wallace Stegner and the conflicted soul of the west: A.O. Scott writes wonderfully for The New York Times on a little-remembered American writer:

Stegner’s books abide in an undervisited stretch of the American canon, like a national park you might drive past on the way to a theme park or ski resort. If you do visit, you find a topography that looks familiar at first glance — as if from an old postcard — but becomes stranger and more deeply shadowed the longer you stay. A tale of frontier adventure turns out to be the portrait of a marriage; a story of courtship and marriage evolves into a tableau of social and technological transformation; a nostalgic rumination on friendship slides toward generational tragedy.

• ‘Literature can foster and express our shared humanity‘: for Vogue, Bernardine Evaristo on the importance of inclusive publishing.

• A new museum director’s first challenge – which objects to give back: a fascinating piece about the issues facing Emmanuel Kasarhérou, incoming director of Paris’ Quai Branly Museum, by Farah Nayeri for The New York Times.

• A thread of great threads, from which I learned so much and which I admired for their use of Twitter as a form…

• Open access to collections is a no-brainer – it’s a clear-cut extension of any museum’s mission: an important argument by Douglas McCarthy and Andrea Wallace for Apollo.

• Why filming police violence has done nothing to stop it: Ethan Zuckerman for MIT Technology Review.

• Welcome to the United States of Amazon: the first part an eye-opening investigation into Amazon for Tortoise Media by Alexi Mostrous and James Ball, arguing that ‘[f]or the most part, its leaders have failed to acknowledge a corporate responsibility to anyone apart from the consumer.’

• Publishers sue Internet Archive over free e-books: this is aan important story, with the basics in this New York Times article by Elizabeth A. Harris, and more background here…

• Lawsuit over online book lending could bankrupt Internet Archive: … from Timothy B. Lee for arstechnica.

• Visual data analytics: nerd-y no doubt, but this is a great round-up from BBC R&D about their wide-ranging, cutting-edge work ‘using artificial intelligence and machine learning to improve the quality, compress and even colourise video – efficiently and ethically’.

• Some reflections on the practice of research: this is a terrific introduction by Alexa Wright, University of Westminster, to a dossier of articles about practice-as-research for the new, open-access issue of The International Journal of Creative Media Research.

• Should we fear death?: a stimulating short essay about the idea of a secular afterlife for OUPblog by philosophers Espen Gamlund and Carl Tollef Solberg.