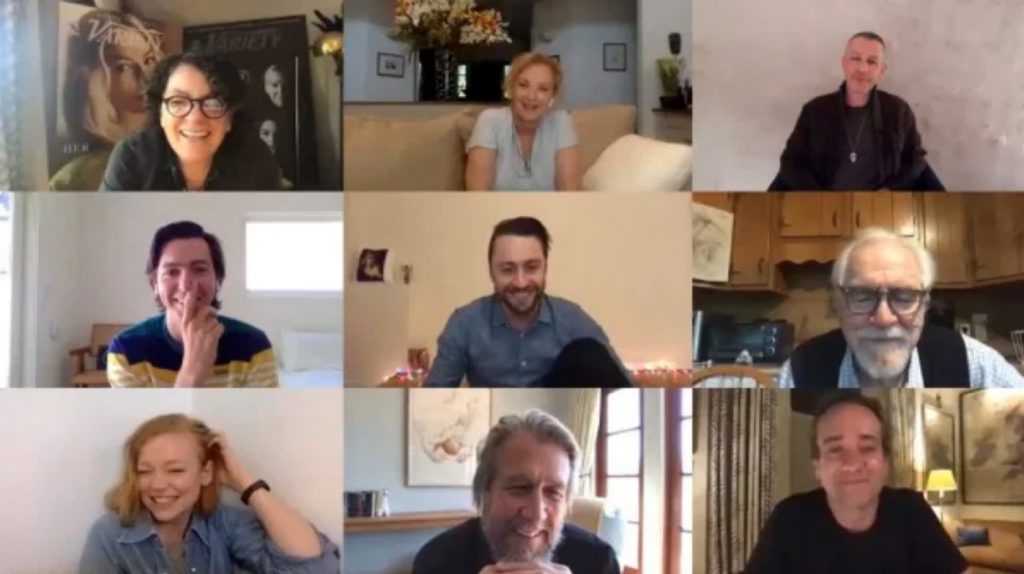 John Wyver writes: another pot-pourri of links to stuff that has engaged and interested me over the past week, including the exceptional virtual roundtable organised by Variety with the cast of Succession – more on that below the fold. More urgent reflections on the the past and the present need to take the lead…

• Fighting over statues obscures the real problem – Britain’s delusion about its past: Martin Kettle really good for Guardian:

There are not many countries as steeped in their own history as Britain appears to be, yet which are so ignorant about it.

• Britain’s obsession with the Second World War and the debates that fuel it: Kit Kowol for The Conversation on contested views of World War Two.

• The new age of autarky: historian David Edgerton as valuable as always, for New Statesman.

• The unpresident and the unredeemed promise: Fintan O’Toole as great as ever for the New York Review of Books – from the following he spins a dazzling analysis of the present and of possible futures:

The US has engaged in many armed conflicts, but three of them have never ended: the Civil War, the Vietnam War, and the so-called war on terror. Their toxic residues flow from different directions into the current breakdown of the American polity.

• The mainstream media won’t tell you this: Helen Lewis for The Atlantic on social media, conspiracy theories and culture wars.

• #DefundtheBBC – the anatomy of a social media campaign: a fascinating analysis by Steven Barnett and Doug Specht for The Conversation.

• Eating in the studios: dining with the stars?: I was delighted by this post from the Studiotec research project about the canteens of European film studios at their height.

• The absolutist case for problematic pop culture: Mark Harris at Vulture is the piece you need to read about Gone with the Wind and HBO Max’s misguided decision to remove the film from its platform.

• The swinging, jamming musical charms of 1940s Soundies: terrific media archaeology here from Manohla Davis for the New York Times writing on the musical films made for movie jukeboxes, like ‘Hot Chocolate’ with Duke Ellington and band plus a sax solo from Ben Webster:

• A romance with the screen – theater legend Adrienne Kennedy looks back: for Criterion’s The Current Thomas Beard speaks with the playwright about her lifelong ciunephilia.

• ‘I take responsibility’ and the limits of celebrity activism: Jordan Coley for The New Yorker.

• The great artist of deep England: a lovely essay by Niall Gooch on Unherd about the painter and print-maker Eric Ravilious, who died in 1942.

• Points of contact – a short history of door handles: here’s something that you didn’t know you needed in your life, and which does exactly what it says in the title – by Edwin Heathcote for Apollo.

• Bob Dylan has a lot on his mind: Dylan speaks, Douglas Brinkley listens for the New York Times, ahead of the release of ‘Rough and Rowdy Ways’; and here’s a 5-star Guardian review by Alexis Petridis.

• The Battle of Blythe Road: in a lovely short film, made to mark what would have been W.B. Yeats’s 155th birthday, poet Niall McDevitt tells the story of his involvement with the Hermetic Order of the Golden Dawn in Hammersmith:

• The modern ancient: Peter Mandler reflects for TLS on when the classics mattered, reviewing Edith Hall and Henry Stead’s A People’s History of Classics.

• What journalists should know about the atomic bombings: more history, just in advance of the 75th anniversary of the attacks on Hiroshima and Nagasaki – an eye-opening essay by Alex Wellerstein at The Nuclear Secrecy Blog.

• While statues sleep: a major essay for LRB by Thomas Laqueur about Germany and the Civil War and Nietzsche and our responsibility to the past, prompted by Susan Neiman’s Learning from the Germans: Confronting Race and the Legacy of Evil.

• A Bit Lit: another stellar contribution – the 45th! – from the innovative channel talking theatre and much more – Andy Kesson speaks with the wonderful director Kimberley Sykes: