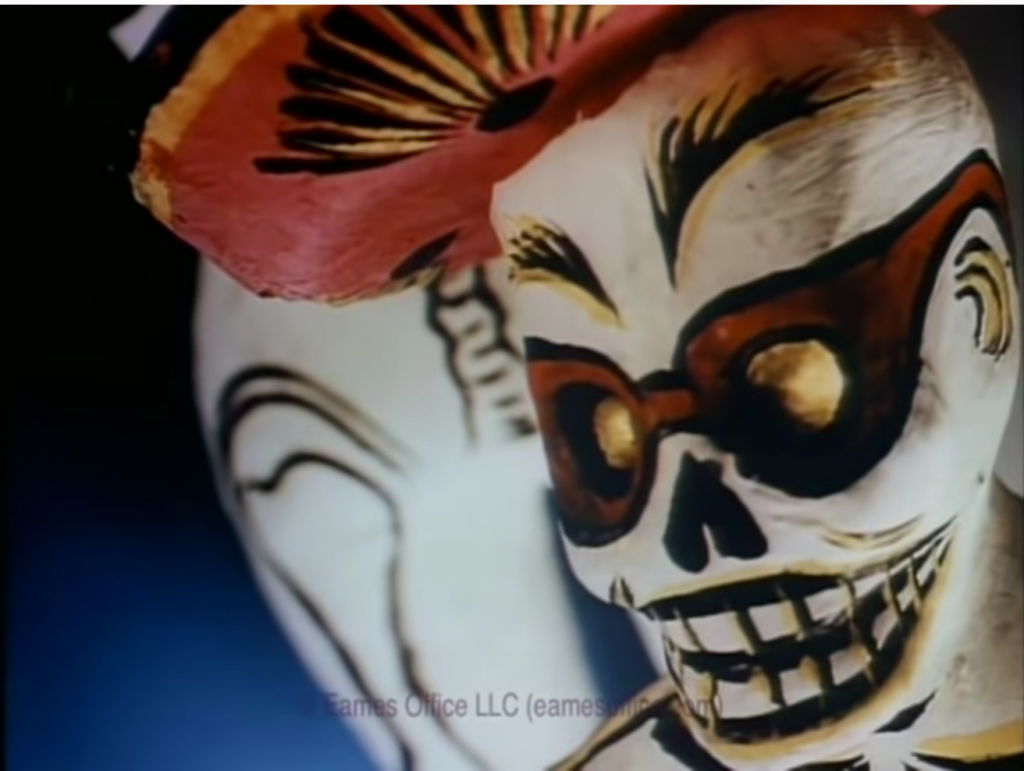 • Toni – a true story told by Jean Renoir: Ginette Vincendeau for Criterion on the French director’s 1935 ‘benchmark in realist filmmaking’.

• Henry Jenkins in a FB post about his summer viewing considers some little-known Douglas Sirk films.

• Colour costume design: a really terrific post by Sarah Street about the British cinema costume designs of Elizabeth Haffenden and Joan Bridge, including The Prime of Miss Jean Brodie (1969).

• Screening Race in American Nontheatrical Film: an open access version, including a .pdf download, of this exceptional collection of essays edited in 2019 by Allyson Nadia Field and Marsha Gordon for Duke University Press; wonderfully, the publishers have also built an accompanying website with links to many of the films discussed in the book. An absolutely exemplary resource – and among the films featured is Day of the Dead (1957), made by Charles and Ray Eames, from which the header image also comes.

• The Proms row is just the beginning of Tim Davie’s battle to save the BBC: strong analysis for New Statesman from former BBC exec Roger Mosey, now a valued commentator on the corporation.

• Why TV gives old F1 laps the illusion of speed: this is so interesting about changes in OB coverage of motorsport, by Jonathan Noble for motorsport.com.

• Q25: What do ‘Yearly Top 10’ lists tell us about Netflix viewing?: Amanda Lotz continues her invaluable series of posts about Netflix and conventional broadcasting.

Today Gramsci’s motto is widely repeated, but it appears to have become completely detached from the underlying strategic and organizational questions that framed Gramsci’s use of the phrase in L’Ordine Nuovo

• How to make it as a paparazzo in a pandemic? Focus on influencers: Taylor Lorenz for The New York Times on Fletcher Greene, The Hollywood Fix and Gen-Z.

• What You Will (The Shakespeare Ensemble) @ online: Peter Kirwan for his vital Bardathon blog on this remarkable online initiative.

• How Wagner shaped Hollywood: courtesy of The New Yorker, a typically rich and wide-ranging excerpt from Alex Ross’ forthcoming Wagnerism, one of the books I’m most looking forward to this autumn.

• On August 29, 1970: writing on his blog, Richard Williams on watching, and listening to, Joni Mitchell and Tiny Tim at the Isle of Wight festival, an then seeing this (posted to Youtube by the distributor, Eagle Rock):

• Leap of faith – how Mark Rothko reimagined religious art for the modern age: Aaron Rosen on the restoration of the artist’s great 1964 chapel for the de Menils in Houston, one of the world’s truly special and spiritual spaces.

• Going to Coventry: Gillian Darley for the LRB blog on the planning decisions facing the city ahead of being City of Culture next year:

The centre of postwar Coventry was designed to be legible and pleasurable, planned more gently and less rigidly than the modernist norm. As built (and embellished), it encourages people to linger, to walk through and around public spaces, offering choice rather than dictating a single unwavering route. This was a version of new architecture with a human face, so-called Scandinavian modernism; and so, without much alteration, it remains. For now.

• The origins of sprawl: for Paris Review, Jason Diamond on Levittown and William Gibson.

• The lifts in your office are a coronavirus nightmare: Natasha Bernal with a strong technology and design story for Wired.

• Why narratives about the digital are so important: Simone Natale on the Circuits of Practice project which is concerned with how museums tell stories about modern computing.

• Analysing the language of Fringe show descriptions: so good from Melissa Terras, considering the results of ImprovBot and Voyant Tools tackling a corpus of ‘28311 previous Edinburgh Fringe shows, including their titles and their 100 word descriptions, that appeared in the programme between 2011 and 2019.’

• And finally, I hope you enjoy this as much as I did…