The language of lockdown 1. 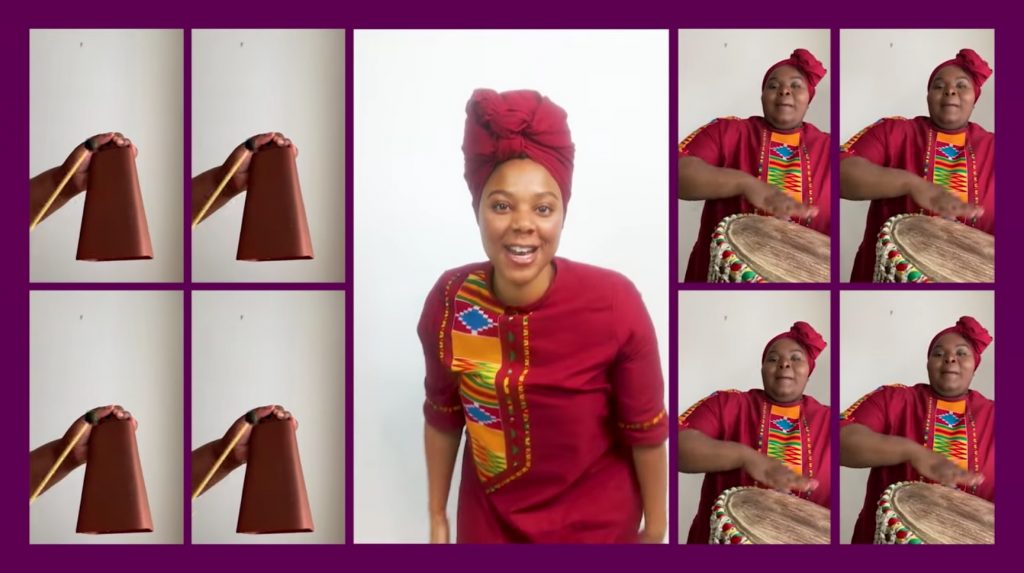 John Wyver writes: Two months or so into lockdown I wonder if, along with so much else, we are seeing a fundamental shift in the screen language of our moving image media. So do I have your attention now?

I am struck by how quickly so much online performance, entertainment and drama has moved away from forms in which single screen images are predominant and on-screen space is constructed through sequential editing of supposedly contiguous shots. Instead, we are seeing the blossoming of innovative screen spaces with multiple images from separate real world or abstract environments proliferating within single frames.

As I’ll go on to explore in what I intend to be a series of posts, key influences here are our enforced use in professional and personal contexts of Zoom and the like, as well as the mainstreaming of super-smart Tik Tok videos. Another contributing factor, of course, are the constraints on conventional media production. Out of this nexus of challenges and opportunities is emerging what we might think of as the screen language of lockdown.

This past weekend saw the premiere of Illuminations’ modest contribution to this language with Unicorn Theatre’s Anansi the Spider Re-spun, episode 1: Brother Anansi and Brother Snake, a screengrab from which is above. Over the past weeks we have been working with the Unicorn’s artistic director Justin Audibert and his brilliant creative team to adapt for the screen the Unicorn’s hit show for 3-8 year olds. Our own Todd MacDonald collaborated as editor and technical director, and as yesterday’s 5-star review from Samuel Nicholls at A Younger Theatre recognised, the result is simply ‘an unbeatably fun and fresh experience’.

The first sense in lockdown I had of something new and different was from watching the socially distanced performance of part of Beethoven’s Ninth Symphony from Rotterdams Philharmonisch Orkest. This went online on 20 March, and at the time of writing has clocked up 2.8 million views on YouTube and countless more elsewhere. It remains a heart-warming delight.

Since then, we’ve seen a host of variants, including this beautiful vocal work, 40 Parts for 40 Days, which features Stile Antico singing Thomas Tallis’ Spem in Alium.

Dancers quickly joined their musician colleagues with the Ballet de l’Opéra national de Paris working with director Cedric Klapisch to make the astonishing – and astonishingly beautiful – “Dire merci” (online 16 April). If you haven’t already seen this, do stay to the end…

Among the very finest — and most complex — of these screen space classical performances is the glorious Bolero from The Juilliard School (online 30 April), the making of which is discussed here.

Drama too has embraced the language of split-screen space, with one strategy being the explicit use of Zoom calls as the context in which a narrative is developing. The hilarious Initial Lockdown Meeting from the cast and scriptwriter of W1A is perhaps my favourite example to date:

Theatre companies have also been exploring the screen space of Zoom as a performance arena, as Peter Kirwan has described in his invaluable Bardathon reviews of The Tempest (Creation/Big Telly Theatre) @ Zoom and As You Like It (CtrlAltRepeat) @ YouTube and as Ben Broadribb and Gemma Allred have been documenting so productively at the ‘Action is eloquence’: Re-thinking Shakespeare blog; see especially their jointly authored Lockdown Shakespeare: the state of (the) play.

The most exciting and rewarding use of a live split-screen space that I’ve experienced so far was last Wednesday’s presentation by Theatre for a New Audience and Fisher Centre at Bard of Caryl Churchill’s Mad Forest. Directed for a specially modified version of Zoom by Ashley Tata, this was a gloriously inventive production discussed in The New York Times by Ben Brantley. There were only three live webcasts and – presumably because of copyright restrictions – there is no online recording, but hopefully these screenshots can give a sense of the 1 hour 40 minute show. You can also download the digital programme here.

There’s much more to say about this Mad Forest – and I very much hope that the production develops and returns – but as I watched, despite (or in large part because of) the technical glitches and the raw aesthetic, I felt that I really was seeing the rapid development of a new form. I had a notion that this was just as I might have felt had I sat in a Nickelodeon around 1908 or crouched before a flickering television broadcast from Alexandra Palace some thirty years later.

Clearly the use of split screen images is far from unprecedented in cinema and television, and my next post will look at some of the precursors. But the contexts in which they have been used have for the most part been limited, as in news and sports broadcasting on television and as somewhat exotic visual spectacles in mainstream movies like Grand Prix (1966) and Scott Pilgrim vs. the World (2010). What we are beginning to see in this new language of lockdown feels different, and the reasons and implications of this I’ll endeavour to tease out in future posts. Needless to say I would welcome discussion of this, as well as additional examples and references to other places where this is being discussed.