The making of the Henry IV trailer 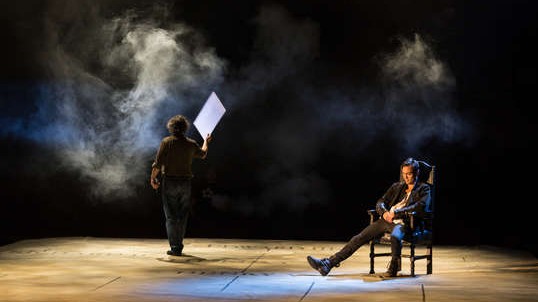 On Friday the Royal Shakespeare Company launched the trailer for their new productions of Henry IV Parts I and II:

Following November’s successful showing of Richard II, these new stagings will be broadcast in cinemas for Live from Stratford-upon-Avon on 14 May and 18 June in Britain, and then over the following months abroad. The broadcasts are produced by the RSC, as is the trailer, and not by Illuminations, but I am involved as the producer – and I thought it might be insteresting to share some notes about how the Henry IV trailer came together.

A group of ten or twelve of us at Stratford started discussing the trailer just after the Christmas holidays. It was clear that it needed to do some heavy lifting in the sense that it would have to work both online and in cinemas, and that it needed to advertise the stage show in Stratford (where the productions play right through the summer), on an extensive regional tour and at the Barbican, as well as the Live from Stratford-upon-Avon screenings in Britain and internationally.

We wanted to achieve some continuity with the Richard II trailer, and to keep the idea of a ‘reveal’ which moves from a film world into the theatre towards the end. But in contrast to the previous trailer, we decided to have this one peopled in some way with one or more characters in the play. But of course the production remains in rehearsal, and so there was no possibility of including actual scenes. Nor when we started preparing the shoot were all of the costumes made. So as is often the case with marketing materials prepared long in advance, we had to work with ideas and elements that we hoped would be complementary to the actual stagings.

We thought long and hard about which passage of the text to work with, not least because there is no obvious candidate as there was with ‘this sceptr’d isle’ for Richard II. I think it was Owen Horsley, who is assistant director on the two plays, who suggested working with Hal’s soliloquy from Act I Scene of the first play, not least because it encapsulates many of themes of both plays taken together. To get the whole piece in less than 90-seconds, the preferred length for the cinema trailer, Owen had to make some small internal cuts to the speech.

Alex Hassell, who plays Hal, very kindly agreed to work with us to film the speech. But the company is currently rehearsing in London, and he could be spared for only a single day. Moreover, the filming had to be in Stratford because we needed to film on the RSC’s main stage. As a consequence he and Owen, who directed the performance, came up on an early train, filmed with us until 10pm that day and were driven back to London so as to be in rehearsals at 10am the next morning.

We wanted to avoid the ‘merrie England’ sense which too often afflict these plays, although at the same time we wanted to reflect the sense that the production will have significant medieval elements in its setting and designs. We also wanted something of an ‘epic’ feel, even if filming with an army of knights on the battlefield of Shrewsbury probably was not going to be feasible. Mulling collectively on all that, we came up with the idea of having part of the speech delivered directly to camera in a tavern and then switching into a more abstract world which stressed the responsibilities of kingship that Hal would have to take on. Hence, the simplified family tree on which he stands in the second part.

The floor cloth was designed by RSC assistant designers Max Dorey and Madeleine Girling, and it was created over several days in the RSC’s Stratford paint shop. The production’s designer Stephen Brimson Lewis (who also conjured up the beauties of Richard II) advised on Alex’s costumes as well as those of the extras – and we aimed to have a judicious mix of the medieval and the modern.

The RSC has an excellent in-house video team and Maxwell White directed with Kris Vankay as director of photography – and they both then saw the trailer through the post-production process as well. My colleague on the live broadcasts, David Gopsill, worked as lighting director for the shoot, which was all brought together with consummate ease by line producer Henry Filloux-Bennett.

We filmed exactly a fortnight ago, on Tuesday 11 February, starting on the main stage of the Stratford theatre at 9am. Initial tasks included the laying of the floor cloth and the building of a hired ‘Jimmy Jib’ crane which would achieve the pull back from the close-up on Alex and the revelation of the floor cloth. Fortunately Wendy and Peter Pan has only minimal ‘permanent’ elements and so the stage could be cleared for us. There were all the usual preparations for a shoot, including the careful lighting of the stalls so as to properly show off the auditorium. We began to rehearse around 11.30am, had a brief break for lunch in the theatre’s ‘green room’ and the started to film just after 1pm.

We went back and forth on whether we should have a chair – which might be a throne – in the shot, and Max and Madeleine had three alternatives on offer. We eventually decided that we would have one, but one of the most notable elements of the finished trailer was an almost entirely fortuitous consequence. Alex finishes his speech and arrogantly, assertively sits down, lounging back and extending his right leg towards ‘Henry V’, the king he will become as painted on the floorcloth. The action seems sufficiently significant for one commentator on Twitter to dub this – rather fittingly – ‘the foot of destiny’.

Once we had a take with which we were all satisfied we dismantled the crane and put the camera on a tripod to get the wide shot of the theatre with the house lights coming up. David Gopsill wrangled the smoke in the back of the shot so as to sculpt the light and give the shot some depth – this mostly involved, as can be seen above, getting a spurt of smoke and then waving a big bit of card to waft the cloud into roughly the right place. By 3.30pm or so we were through and out of the theatre.

Part two of the day, and part one of the trailer, could not be shot until later in the evening, although we had already done extensive preparations the day before. King Edward IV School, just up the road from the theatre, very kindly allowed us to film in the historic upper schoolroom where Shakespeare is believed to have studied, and we had already spent a day getting this location ready. But there was a concert that evening in the space beneath the schoolroom and so we were not able to begin filming until around 8pm.

Henry had brought together some twenty volunteers to be extras in the back of the shot, and these were fed and watered, rehearsed by Owen, and dressed in the RSC’s nearby Courtyard Theatre. At present, the building is closed, although used for rehearsals, but that evening another concert, which had been scheduled for a venue in Stratford that had been damaged by the storms, was re-located here. All of which involved two teams dancing around each other rather niftily.

For the schoolroom shoot we had the RSC’s high-end F5 camera, which we had also used earlier in the day, on a dolly that could achieve the smooth move in to Alex’s face. There were lights rigged in the timber roof and on poles outside the windows, but the great job was that we were permitted to use real candles. All of which, under David’s careful lighting, makes the shot look very beautiful.

It wasn’t until we were in the cutting room that we decided that we would use the close-up of Alex at the top. We had a really good take of the full piece but it seemed that this gave added punch to the line ‘I know you all…’ Although we released Alex before 10pm, the shoot lasted for another hour or so as we filmed some – as yet unused – closer shots of the merry-makers. The de-rig started before 11pm and continued the following day, but many of us enjoyed a pint in The Dirty Duck before turning in.

Max and Kris worked on the edit over the next few days, drawing in a terrific music theme from production composer Paul Englishby, which he contributed against a crazy deadline, and the mix from the sound designer known as ‘Spesh’ who pulled it together on his laptop while in South Africa. Henry IV cast member Antony Byrne recorded the closing voice-over in a sound studio just off Tottenham Court Road. Lots and lots of e-mails facilitated discussions about the grade, the planning and creation by the RSC’s in-house team of the graphics (and the end cards will vary for different media, venues and countries), and the eventual internal sign-off process.

Which is more or less how we got to now. There is more about the making of the trailer here and a gallery of photographer Lucy Barriball’s behind-the-scenes shots here. Over the weekend there were lots and lots of Facebook likes, Twitter shares and a discernible bump in ticket sales via the RSC box office. So the trailer seems at least to have started doing its job.

Image: lighting director David Gopsill on stage while Alex Hassell as Hal waits for the next shot, in one of Lucy Barriball’s great photographs, more of which can be seen here; courtesy of the RSC.