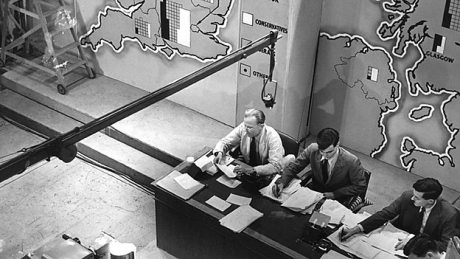 (Go here for a note about why I have started to post in this way.)

• 100 Voices That made the BBC – Elections: a glorious archive site about the televising of elections from the BBC and the University of Sussex (kudos to David Hendy) which makes extensive use of the Corporation’s oral history interviews. (The BBC image above is the studio at Alexandra Palace during the 1950 television coverage.)

• Karen, an App That Knows You All Too Well: Frank Rose for The New York Times on the new story-telling app from the excellent Blast Theory, to be launched 16 April.