Wimbledon before the war 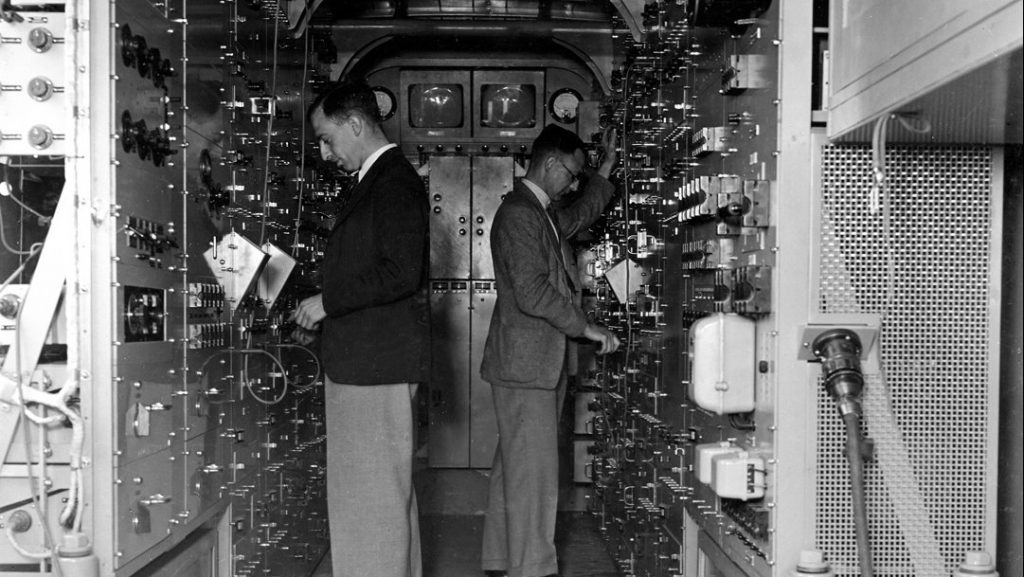 Last week BBC Archive Tweeted a wonderful image (detail above, full picture below) of the mobile television van at Wimbledon in 1937, the first year that BBC Television covered the championships. Inspired by that, and driven by my interest in broadcasts before World War Two, this post explores what was shown and how it was received. The initial transmissions in 1937 – the first outside broadcasts of any sports event – were an immediate triumph, and tennis coverage quickly became one of the recognised successes of the new service. No wonder in September last year the BBC was so keen to reaffirm its relationship with the All England Club. 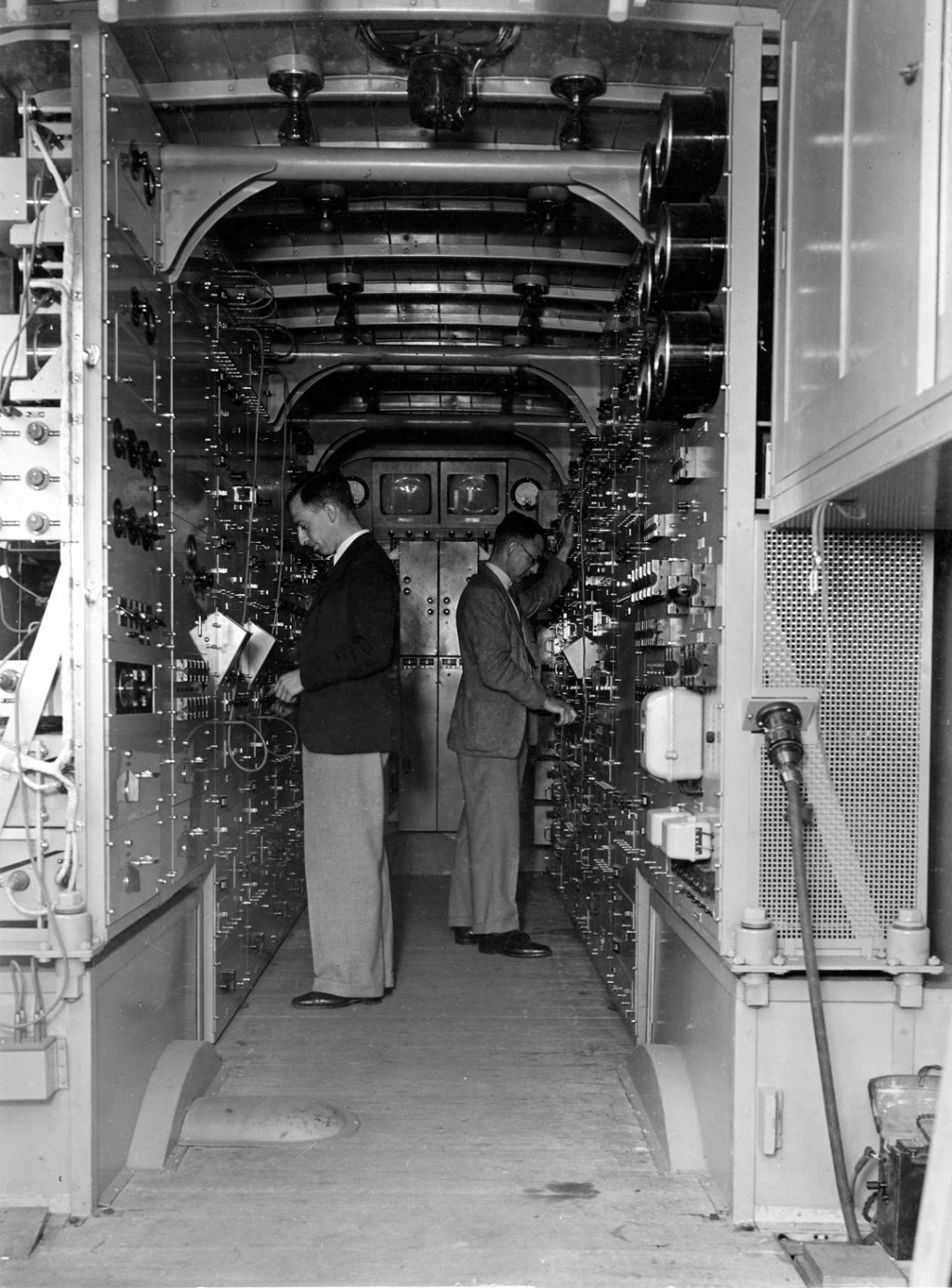 In 1937 it appears that it was decided at a late stage to try out television presentations from Centre Court, beginning on 21 June. Radio Times has no television listings for the first week, although the more extensive radio updates justified the magazine running on its cover the splendid modernist montage below. In the second week of the championships there is simply a notice saying that

The experiment of televising play on the Centre Court at Wimbledon by means of the radio link will be continued this week. Transmissions will take place every day during the afternoon programmes or after 4.0 with commentaries by F. H. Grisewood and John Snagge.

It seems that rather than there being sustained coverage, snippets of play were shown throughout the afternoon. Two cameras were used, one for close-ups and one for a general view, and the match between Bunny Austin and George Lyttleton Rogers was the first to be broadcast. Moreover, according to the Teletronic site, ‘the coverage was completely overshadowed when the cameras swung round to capture Queen Mary entering the Royal Box’. The Manchester Guardian offered more details:

Queen Mary was “televised” during her visit. She could be clearly seen on the screen, sitting in the royal box, and wearing sunglasses. This was not the first time that she had been seen by television, for there was a distant view of her in the Coronation procession.

The Listener ran a full-page review of the Wimbledon coverage, together with three photographs, and compared the broadcasts with newsreels:

As in the news films, it has seldom been possible to watch the progress of the ball itself. But the strokes and the movements about the court have all been so clearly visible that the absence of the ball has hardly seemed to trouble the viewer after his eyes and his spectator’s reactions have become accustomed in a minute or so to the strangeness of it all. So many news films in the past have, by switching about from player to player, made it difficult, if not impossible, for the filmgoer to watch the progress of the game.

Those responsible for the television of Wimbledon avoided this pitfall by arranging one camera that gave viewers a picture of the entire playing area of the Centre Court. So that in doubles as well as in singles we were never in doubt as to who was at which end of the Court, who serving, who at the baseline and who at the net. But in addition to this general view, we were given an occasional close-up, of the player who was serving, of the scoreboard, of Queen Mary entering the royal box, or of any other occurrence of notable interest to which the spectator actually sitting in a seat at Wimbledon would have been likely to turn his eyes.

A month after Wimbledon, announcing coverage of Davis Cup matches from Wimbledon, Radio Times included this in their listings:

‘In my opinion, much of the fascination of television, and to a great extent its future, is bound up with actuality, a virtue which it alone possesses, and which the news-reel, with its time-lag, misses. In direct television the viewer will learn and appreciate that the picture he is watching in his home is the picture he would be seeing at that very moment were he with the camera, and not one that has already taken place.’ These words of the Director of Television [Gerald Cock],written in April, have had particular significance during the last few weeks, when transmissions of tennis from Wimbledon have been a regular feature of the programmes. 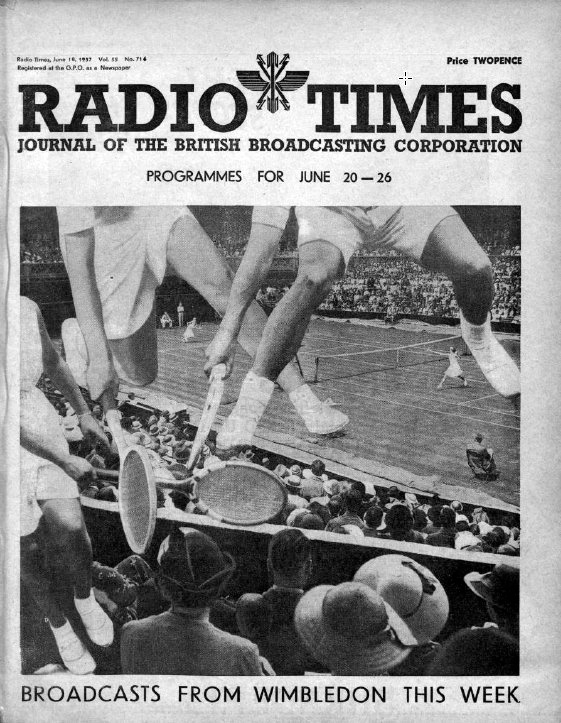 Radio Times also noted in August that the television mobile control room, constructed by EMI-Marconi (and pictured above), had so far been used only for the Coronation procession on 12 May and at Wimbledon. And it was the tennis that posed the greater challenges to the engineers:

First of all there was no convenient supply of electricity. Another difficulty was that Wimbledon is a long way from the underground cable linking key-points of London to Alexandra Palace. Two additional vehicles had to be used to remedy these deficiencies — a transmitter van, and a van containing a six-cylinder petrol engine to generate power… The Wimbledon broadcast utilised all three vans, and marked the first transmission with a complete radio link. The vision signals and sound signals had to be sent by radio to Alexandra Palace for re-transmission to viewers, and electrical power to do this had to be generated on the spot.

Buoyed by initial success, in 1938 BBC Television was at Wimbledon from the opening day. Two hours of coverage were scheduled on the Monday and Tuesday of the first week, although by Friday the outside broadcast vans were at Lord’s for the second test match between England and Australia. Having only one OB unit posed a significant problem for the planners, which the Radio Times columnist ‘The Scanner” explained:

Which are you more interested in—cricket or tennis ? Would you be willing to sacrifice seeing one of the last three days at Wimbledon in order to see the final day of the Test match at Lord’s? Whichever way you feel there should be very few grumbles about the arrangements made by the television Outside Broadcasts department. In the programmes printed on page 16 you will see details of the televising of the first two days at Lord’s, Friday and Saturday. The transmission will continue on the following Monday, but if there is no doubt about the result by the third day and the finish seems unlikely to be exciting, the mobile unit will leave Lord’s to prepare for the Wimbledon transmissions on the Thursday.

Afternoon coverage was scheduled for the Thursday, Friday and Saturday of the second week, but there were no highlights programmes in the evening. The technology for tele-recordings of live transmissions was still at least a decade away, which accounts also for their being no moving image traces of these pre-war broadcasts. Planning became a little simpler, however, with the delivery in August 1938 with a second mobile television unit, replicating the three vehicles of the first.

Plans for the 1939 broadcasts from Wimbledon were detailed in Radio Times a fortnight or so before the championships began:

Seven days, entailing about nine hours’ programme time, will be spent at Wimbledon by the television mobile unit for the tennis championships, with [Tommy] Woodrooffe again as commentator. On the first Saturday, July 1, an hour’s play on the Centre Court will be televised ; there will be a half-hour’s transmission on the Monday, Tuesday, and Wednesday, and one and a half hours for the semi-finals on Thursday; and on the last two days of the finals there will be two and a half hours of play each day. Three cameras will be used— two behind and above the Centre Court, opposite the Royal Box, and a third at ground level to give close-ups of the players and crowd scenes.

The end-on cameras were an innovation this year, replacing the one that had given only an oblique view of the court. The final day of broadcasts was Saturday 8 July. Less than two months later, on 1 September 1939, the Television Service closed down for the duration.

When the service returned in early June 1946, prominent in the schedules was, first, outside broadcast coverage from Wimbledon of Wightman Cup matches and then on the afternoon of 16 June from the same location a programme titled Lawn Tennis – Are Women Faster? This was apparently a review of the changes in ‘Ladies’ Championship tennis’ over the previous 60 years. Television coverage of the championships themselves resumed only at the end of the first week, on Saturday 29 June, the OB unit having been previously occupied at Lord’s by the England vs India Test match. Seventy years on, no such conflicts for equipment are likely to interrupt this week’s extensive BBC coverage.