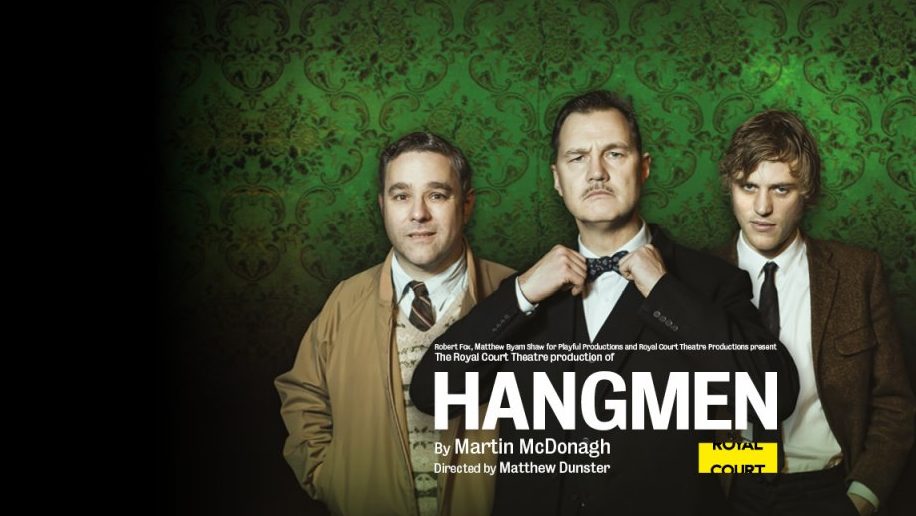 To King’s College London today for The Live Cinema Conference 2016. This intriguing event intends to explore the full range of live cinema today including ‘the production, delivery and attendance of outdoor screenings, drive-ins, sing-a-longs, sensory augmentations, fully immersive experiences and event-led distribution, spanning the independent to the mainstream.’ So not just the broadcasting of theatre in cinemas, which of course is my particular interest and which will be an element in the day’s focus. And then there’s a special presentation of the recent NT Live presentation of Hangmen (above) this evening for which we are promised:

a unique fusion of performance, film and food in a playful re-play of the play. For the first time, the forms and aesthetics of ‘event’ cinema, ‘live’ cinema and promenade theatre are united in a hybrid, multi-layered, immersive and sensory experience, which promises to delight, surprise and enthrall (sic) the audience.

The full programme of today’s event is here. In the spirit of the occasion – and assuming I can secure a reasonable wi-fi connection, I’m going to try live blogging with occasional posts through the day. So check back later and/or follow me on Twitter @illuminations with #LCCUK16.

• 9.50am: Professor Martin Barker kicks off proceedings, drawing together and updating his research first presented in his important 2013 study Live to Your Local Cinema: The Remarkable Rise of Livecasting. Today ACE is releasing a significant new report which will also further inform debates, Live Cinema in the UK. Among the changes to Martin’s ideas since 2013 is that ‘live-ness’ no longer seems so important for audiences, and that this changed significantly with the encores of Frankenstein. Also, audiences have settled into their expectations of this form, and no longer find presentations ‘surprising’ or ‘strange’.

Unresolved, Martin acknowledges, is the question of whether live cinema is cannibalising audiences. Interesting, too, is the sense that audience concern and complaints are mostly focussed on the social experience and the ways that this falls short – and rarely about the performance or the ways in which it is mediated. Maybe important here is the sense that audiences are reclaiming the spaces of the cinema.

• 10.15am: First panel, looking for some kind of common definition of live cinema and identifying who are some of the key players. A broad range of contributors includes Stuart Brown, Head of Programme and Acquisitions, BFI, who outlines what the BFI is contributing to this area; Lucy Jones from comScore, which until recently was known as Rentrak, and which collects cinema box office figures; Melissa Cogavin from Event Cinema Association – and with Melissa’s contribution there’s the first trace of tension in the debate, as she questions whether the industry needs the new term of ‘live cinema’ when ECA has spent a lot of time and money trying to establish, within the industry and among audiences, of ‘event cinema’ as an overall term.

Emma Keith outlines the productions and strategy of NT Live, and Isabelle Fauchet details her role at Live Digital Cinema, a management and distribution agency for event cinema; and George Wood from Luna Cinema, which organises open-air cinema screenings – he argues (in a polished presentation) that audiences engage at these screenings in very different – and far more active – ways from conventional screenings, not least because 90% of the audiences have seen the classic films that are shown.

Martin asks the panel what is the extra value of ‘live cinema’. Responses include the communal, social sense; the ‘eventisation’ of a shared experience; and the lower cost when compared a theatre or opera ticket. Why is UK leading market for event cinema? Extensive digitisation of cinemas; many UK-based cultural organisations interested in this; audiences previously under-served by multiplex experience (and I would add, by television).

Thinking a bit more about ‘live-ness’ and related issues I’m struck that we are talking here about two entirely distinct types of production. One is the creation of the experience around the screening, as Secret Cinema and Luna Cinema undertake, working with a pre-existing ‘stored’ element of media. The other is the live creation and mediation of a pre-existing theatrical show, as the NT, ROH, RSC and others do. These are quite different notions of ‘live-ness’ (although of course there are elements of overlap) and I’m not sure treating them together is entirely productive. Time for coffee…

• 12.10pm: Panel 2 now, dedicated to ‘Live Cinema Sound: Soundtracks, Singing & Scoring’. Lucy Noble first, director of events at Royal Albert Hall, and champion of movies with live orchestra – they’ve just recently done Gladiator with Royal Philharmonic Orchestra, and there are many more upcoming shows plus a festival of film in the autumn; George Bruell, director of media and communications at Glyndebourne – he notes that part of the impetus for the house taking a more active role in digital exploitation was the waning around 2007 of interest by broadcasters; Ben Freedman, producer, Singalonga Productions Worldwide; Guy Morley, from No Nation, which has developed innovative projects combining film and contemporary popular music; Jason Wood from the Manchester venue Home, who speaks about their commissioning of local artists to score films; and Lisa Brook and Kate Wellham, both with Live Cinema Ltd.

Who do the panellists imagine are their audiences, and how do they work with them? It’s not clear there are any broad ideas to offer about audience composition – or perhaps it’s too general a question. But Guy talks about the importance of offering audiences ‘transformational’ experiences, whereas Lucy says a key description for their film and orchestra experiences is ‘breath taking’. Ben reflects that for their singalong shows attract an older, largely female audience, often in groups, and that outside London they work with theatres rather than cinemas, because theatres have the best marketing systems to reach those audiences.

Limitations on these kinds of shows? Rights, cost, technical issues? Funding, the panel says – there’s a surprise. Licensing too, recognising the difficulties of securing mainstream titles for shows with additional elements. Ben speaks interestingly about the rights on The Sound of Music, where they don’t pay music money to either the studio or to Rogers and Hammerstein, who control the title, but they believe they significantly enhance sales of DVD and other forms – and the studios seem to recognise this. Also, he says it’s essential to have a cue sheet for active control of the sound levels, to bring this up and down at appropriate moments to enhance the audience experience.

But again, it feels as if we’re exploring here two very different forms of ‘live-ness’ – and this panel is primarily about the live experience in the exhibition venue. Perhaps there’s a distinction here between ‘direct’ live-ness, which is when, say, a venue presents a commissioned score played by musicians in the space, and ‘mediated’ live-ness, which is what NT, ROH and RSC are offering to cinemas.

Or maybe this is exhibition live-ness and production live-ness. Lunch… but before that I regret that Judith Buchanan isn’t here to contribute to the discussion with her Richard III silent film presentations. She organises live actors to speak the lines that are being performed in Frank Benson’s 1911 film version of the play, and accompanies this with a live piano score. It’s a compelling way to give a new ‘voice’ to a century-old film. There’s a good review and discussion of this project by Peter Kirwan at The Bardathon.

And just before we break there’s an interesting disagreement about the extent to which active audiences taking a part in the collective experience, as in singalongs, is a new aspect of cinema – or whether this is a nostalgic recreation of how cinema used to be through to, say, the 1960s. I think the person arguing for the latter position is Matt Jones from De Montfort University who has been working with the AHRC research project at UCL ‘Cultural Memory and British Cinema-going of the 1960s‘. He has organised an immersive showing of One Million Years B.C. at Picturehouse Central on 29 June.

• 2.20pm: we’ve broken into four workshops now, and I’ve chosen ‘Funding Ideas Lab’. Chair Lisa Brook has asked each of the 20 or so people in the room to detail what their key funding headache. Interesting mix of people: academics, exhibitors, reps from the BFI and ACE, and Matt Jones – see above. He explains a little about how One Million Years B.C. was publicised and promoted first time around, and how they are intending to reproduce aspects of this on 29 June. I’m not sure if it’s significant that I’m the only live broadcast producer here.

Hmmm – not much interest here in funding for livecast production, But I think that reflects the overall focus of the conference, which is about live-ness at the point of exhibition.

• 4.25pm: the final panel, focussed on ‘Participants, CoCreators, Pawns: new audiences in the experience economy’. Why are audiences prepared to pay premium prices for these new kinds of experiences? Sense of something special associated with the focussed attention that these experiences expect. Authenticity. Panel also challenges the idea that the prices really are ‘premium’. In response to another question, Jade Desumala from Rooftop Film Club stresses how important it is to learn from the audience, to watch how they interact and then develop from there.

Maybe it’s because this panel is addressing my concerns more directly, but this discussion feels productive.Helen Kennedy from the University of Brighton is doing a good job as chair. Contributions from the panel include Irene Musumeci, Film Marketing Manager, Curzon Cinemas, pointing out that audiences at individual Curzon cinemas are very different. If you’re putting on a live Q&A you need to match the cinema and its audience with the filmmaker – the Canterbury audience is very different from that in Sheffield.

Incidentally, the panels are being live streamed here. But streams cost £30 for individuals, and I’ve not come previously across charging for a stream from a conference that has been supported by public funding. I’m curious to know whether anybody has actually subscribed…

There has been much of interest put forward today, but my overall feeling is that the discussion has been too limited in two key ways. Most of the focus has been live-ness at the point of exhibition, and perhaps inevitably I’m disappointed that there hasn’t been more engagement with live-ness at the point of production. And then almost all of the speakers have been practitioners, and so the focus has been on problems and possibilities on the ground, rather than on a broader analysis. We’re at King’s College London and I’m missing people (apart from the excellent Martin Barker) with more of an overview, even – whisper it softly – contributions from academics.

• 6.45pm: … and after tasty nibbles and a cash bar, it’s on to the main event – a promenade performance and ‘edible cinema’.

More to come… and in fact, a review of this – together with some wrap-up thoughts on the conference – will be the focus for Saturday’s post.