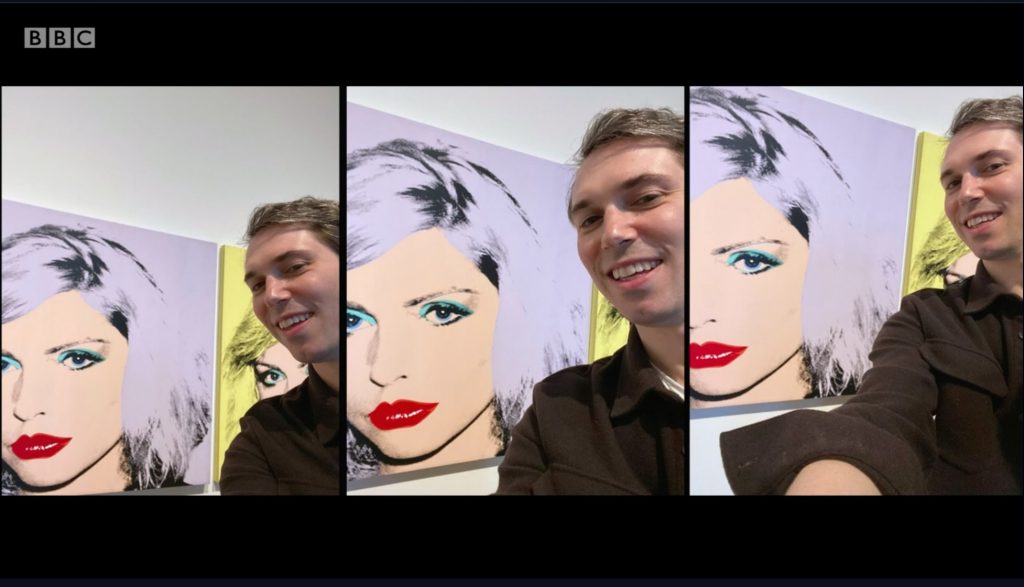 John Wyver writes: On a Sunday evening in early August 1960 the esteemed art critic and cultural mandarin Kenneth Clark (knighted at the time, but not yet elevated to the peerage) hailed television viewers from a bench in the empty exhibition galleries of what was then the Tate Gallery. His position of privilege was within the great Picasso show of that summer, and over the next half-hour he walked through the spaces, guided the eye of monochrome electronic cameras linked to an outside broadcast (OB) unit, and offered his far from unequivocally positive thoughts about the art of the great Spaniard.

On a Friday just over a month ago the writer and broadcaster Alastair Sooke greeted us at the end of the Millennium Bridge. He was about to take us inside the empty exhibition galleries of Tate Britain (which back in 1960 as Bankside B electricity generating station was still under construction) for an ‘exclusive’ tour of the Andy Warhol show that had opened only days before. Sixty years on from Clark’s endeavour, Alastair Sooke followed pretty much the blueprint established by that pioneering ATV broadcast, demonstrating in the process aspects of a virtual museum visit of the kind that we are becoming ever more familiar with.

As a follow-up to Monday’s post and in anticipation of tomorrow’s Museum from Home day from the BBC (part of Culture in Quarantine), this column reflects on Sooke and Simon Schama (who took us around the Ashmolean Museum’s ‘Young Rembrandt’ show) and then selects a number of innovative online presentations of exhibitions created by museums and galleries across Britain and abroad. Both the Sooke and the Schama films are on BBC iPlayer for the next six months, here and here.

Kenneth Clark had the Picasso show more or less to himself because the crowds who besieged the galley every day had been kept at bay for a single Sunday night. Alastair Sooke was in a deserted Tate Modern, and the camera accompanying Simon Schama’s narration in the empty Ashmolean, because both exhibitions, along with every other real world gallery show, had closed owing to the Covid-19 lockdown.

Holding a substantial microphone and trailing an audio cable, Clark walked from space to space, pausing before the canvases he admired and dismissing others. Sooke was considerably more informal than Clark and his camera more mobile, but the screen grammar was pretty much exactly that of the 1960 broadcast. OB cameras had visited museums before Clark went to Tate (see, for example, last month’s post Virtual gallery-going via the BBC) but that show is the first I know of which we have a recording (and it’s frustrating that it is not available online).

The great strength of the Warhol half-hour (filmed, produced and directed by Ruhi Hamid for Swan Films) was the camera’s still, focussed gaze at a handful of key works, including Double Marilyn, 1962, Ladies and Gentlemen, 1975 (the series of portraits of drag queens and trans women) and Sixty Last Suppers, 1986. We were able to look at these works, in whole and as details, and without guidance from a gliding lens. Alastair Sooke also did a very decent job with his to-camera script, especially given the fact that it must have been written and shot at speed. Which is why we can forgive him the dubious claim about ‘Pop Art that [Warhol] invents at the beginning of the ’60s.’ I was also puzzled by the critic’s peroration:

[Warhol’s] work doesn’t have specific readings at all and I think it’s that ability to invite multiple readings which makes sense of the argument that Warhol is a very important contemporary artist.

Surely any and all art, and indeed the vast majority of cultural objects of every kind, ‘invite multiple readings’. That’s precisely why culture continues to engage and sustain and reward us.

What I also found frustrating about Sooke’s tour was how it offered so little sense of the spaces of the exhibition. I came away with no real notion of the geography of the show and I couldn’t place myself at any point. Nor was there a hang in a single room that I felt I had truly experienced. For a satisfying virtual visit it’s not enough to expose individual works and spin an interesting argument around them. I need a sense, however fleeting and distant, of being there.

PS. There’s one other difference between the broadcasts by Sir Kenneth and Alastair — the former failed to take a selfie with one of the masterworks on display, whereas the latter did just that, with Warhol’s Debbie Harry, above.

Simon Schama’s disembodied visit to the Ashmolean doesn’t get off to a great start on its BBC iPlayer page. The film, about the ‘Young Rembrandt’ show remember, is illustrated with a photograph (above) of Schama standing before Rembrandt’s ‘The Jewish Bride’. Schama, however, doesn’t appear in the half-hour visit to the Ashmolean, and nor does ‘The Jewish Bride’. This great canvas is safe and sound in the Rijksmuseum, where everyone accepts that it was painted in the final years of the artist’s life, between 1665 and 1669 when he was in his early sixties.

That aside, the film’s gliding movements through the spaces of the Ashmolean deliver exactly the spatial sense I missed at Tate Modern. Each of the galleries is revealed in wide shots, before the camera concentrates on individual works. Schama’s presence as an absence is productive too. There’s literally no body to distract our eyes as we explore the glories of the show, and what Simon says is the fruit of a lifetime’s study. I learned a lot and I came away ravished by the visuals (Christian Collerton filmed, produced and directed, again for Swan Films.) I also felt I had enjoyed a satisfying half-hour on a day trip to the dreaming spires.

Online the Ashmolean has assembled an extensive and impressive, if largely conventional, digital presentation of the exhibition with numerous images and detailed text. At the start is this video with curator An Van Camp, which is an intriguing companion piece to the BBC film:

Tate Modern also have their own online presentation of ‘Andy Warhol’, although the text and image selection is a good deal skimpier than that shared by the Ashmolean. There is also a 7-minute video, presented by curators Gregor Muir and Fiontán Moran. If nothing else, this successfully restores the spaces of the show that are evacuated in the Alastair Sooke film.

What I want now to assemble (and I’ll welcome recommendations) is a list, with modest comments, of distinctive and successful online presentations of shows, starting with the following:

• London Transport Museum: Poster Power digital weekend online, with a quiz, thematic introductions to selections of the museum’s 44,000 posters, and a whole range of great images; plus this short visit to the poster store:

• Judy Chicago from Baltic: a remarkable range of digital resources assembled for the exhibition (which was scheduled to close 19 April) of the pioneering radical feminist.

• Fondation Beyeler – Edward Hopper online, drawn from a retrospective organised with the Whitney Museum of American Art, has exemplary discussions of key works and some smart videos.

• Next is a classical, engaging Twitter tour of a single gallery at Washington’s National Gallery of Art, led by curator Eva Gonzalès; the panoramic video view works from here, as does the link to all the works in the space but for the tour in the thread you’ll need to click on the arrow in the bottom right-hand corner of the @ngadc Tweet.

• Judd, from MoMA, New York – the Modern has pulled together an extraordinary range of images, texts, audio recordings and videos to offer remote access its retrospective of Donald Judd; I’ve already spent a lot of time exploring this – and I intend to return.

• Now virtual and in video, museum websites shake off the dust: Jason Farago has assembled a truly exceptional range of museum and gallery links in an article for The New York Times; lots more to explore there…