The language of lockdown 2. 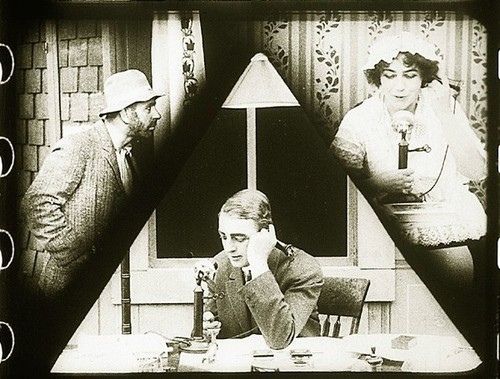 John Wyver writes: In the first post in this series I suggested that the lockdown has prompted the proliferation of the performance of music, dance and drama in split-screen media spaces. The prominence of work that employs what, following the scholar Lev Manovich, we can call ‘spatial montage’ (that is, juxtaposed shots in the same frame, rather than in a sequence) suggests – perhaps – a distinctive challenge to the dominant screen language of performance.

The overwhelmingly familiar language, which is common across screen stories of many kinds, privileges single frame shots and employs them to construct, through techniques like continuity editing, convincing suggestions of real world spaces. (I’m aware that here and elsewhere my own language lacks appropriate analytical rigour; that may come if I get to write up these jottings in a more formal way.)

What I want to do in this post is to highlight some examples of split-screen story-telling in film history and to reference elements of reading that I’m finding useful in thinking about all this. A key source for me is a 2009 paper by Jim Bizzocchi, ‘The fragmented frame: the poetics of the split-screen’, a draft of which is available via the link. Additional reading can be accessed via a decade-old post, ‘Split screen studies’ on the invaluable-as-ever Film Studies for Free resource created by Catherine Grant. The post was compiled by Catherine Grant to complement her elegant (and early) video essay exploring the narrative and psychological dimensions of a split-screen sequence near the start of Darren Aronofsky’s Requiem for a Dream (2000) – and this is well worth (re-)visiting now.

Filmmakers have paid more attention to the possibilities of the split-screen than the theorists. The split-screen device has never been wildly popular, but it has been around for a long time, and despite periods of waxing and waning, has never gone away.

One well-known example of the use of split-screen is in the later part of Abel Gance’s 1927 Napoleon, and a sense of that epic’s use of the technique can be derived from this charmingly hyperbolic trailer for a 2012 screening in San Francisco, which doubles and trebles the triptychs of the film into an intensified split-screen paratext.

There are a number of earlier employments of split-screen techniques, and historian Barry Salt has identified examples from 1901 onwards. These often employ split-screens to visualise the connection between two parties using another central technology of modernity, the telephone. An especially intriguing example features in Lois Weber’s drama Suspense (1913), a frame from which is featured in the header image. (The reasonable quality print below of the 10-minute film includes a pre-title quotation from Kevin Brownlow stating, ‘the split-screens had been established earlier in Denmark’.

Watching this I’m struck by its pre-echoes of the sequence from Requiem for a Dream that Catherine Grant focusses on, with (in addition to split-screens) the centrality of a key, the threat of ‘robbers’ and, especially, the use of keyhole matte.

Doris and Rock may not have had the use of Zoom, but the visualisation here of moderately eroticised electronic connection in telephonic space is parallel to the employment of the multi-screen video meeting trope in drama and comedy that has become almost ubiquitous in recent weeks (I quoted the W1A example in my previous post).

Peter Matthew Ingrassia (in a Montana State University dissertation available here) and other scholars note that the use of split-screens in mainstream films was especially prevalent in the late 1960s and 1970s, with one of the first of this clutch of movies being John Frankenheimer’s Grand Prix (1966)

Other notable examples include the festival documentary Woodstock (1970), George Lucas’ American Graffiti (1973), The Boston Strangler (1969) with Tony Curtis, and the still-remarkable The Thomas Crown Affair (1968).

One argument for the prominence of the technique in movies of this period is that it shows cinema responding to the threat of television, in a manner comparable to the use of widescreen and 3-D in the early to mid-1950s. Split-screen sequences could offer visual and narrative pleasures that were not available on the smaller, lower resolution screens of domestic television. Yet by the late 1960s Hollywood had more or less made its peace with the upstart medium and had settled into a profitable co-existence with numerous connections between the two industries.

Jim Bizzocchi argues that the split-screens of the late 1960s were a response to the vibrancy of youth culture at the time, and most notably the centrality of pop and rock music. As he suggests (and as is supported by the prominence of music in many of the split-screen sequences of the time),

an aggressive commitment to the split-screen was a cinematic attraction that was capable of ‘blowing the minds’ and capturing the attention of a youth culture comfortable with expanded consciousness and oriented towars the visceral pleasures of the sensorium.

I want to consider split-screens on television in the next post, but I can’t resist including the following extract, in part because (truly) I can recall my surprise and delight when I first saw this as a 16-year-old on our television set at home – the title sequence for the ATV series The Persuaders (1971). Here the split screens accompanying John Barry’s score set up the basic narrative premise of two men (Tony Curtis and Roger Moore, if you need to ask), both alike in dignity and more, but from very different backgrounds (one Yank, one Brit), who reluctantly team up to fight crime. The technique is also used here to align this made-for-television series with the glamour and cultural cred of movies like The Thomas Crown Affair.

Split-screens faded from prominence in mainstream movies of the later 1970s, not leat because the optical printing techniques of the time were expensive. In the early – and, crucially, digital – years of this century there have been some striking independent films that have employed the device prominently, including Requiem for a Dream and Mike Figgis’ Timecode (2000), which throughout runs four stories simultaneously in real time in screen quadrants.

So what might we take from these precursors to apply to the language of lockdown? Clearly, we are much deeper into a visual culture saturated both with the intense visuality (and often split-screen sequences) of music videos, and with overlapping windows on the screens our laptops, tablets and phones. Fragmented frames are familiar in our work lives and in gaming, and yet until recently they have not been part of what one could argue is the more traditional visual vocabulary of classical performance and theatre.

To return to Jim Bizzocchi’s essay, he relates split-screen sequences to the ‘cinema of attractions’ of early film, which Tom Gunning and many others have demonstrated characterised the first years of film before the emergence of conventional cinematic story-telling. Often presented as single shots of scenes both mundane and sensational, ‘attractions’ drew their power both from the direct display of their subjects and from the experience of the new, unfamiliar and in some ways seemingly magical technology of moving images.

As others have suggested about comparable standalone sequences in movies such as songs or dance numbers, Bizzocchi proposes that split-screen sequences are throwbacks to this early cinema since each is

a hypermediated attraction that calls attention to itself, and therefore to the process of mediation. In doing so, the split-screen breaks the suspension of disbelief and the commitment to transparency and narrative.

Is this, along with the production constraints of remote filming, what’s at work in, say, the Juilliard Bolero? And how might we understand this hypervisuality in relation to our feelings of isolation and desire for connection? How does the construction of screen space respond to and perhaps compensate for the loss of access to real world spaces? Does the foregrounding of screen space offer different kinds of solace and pleasure to those that might be available from single screen images of performers in environments? And might such foregrounding, to develop the argument about the links with interfaces and gaming, give us an illusion of control to help us navigate the crisis?

The director of The Boston Strangler, Richard Fleischer, said of his use of split screens in the film, ‘The total effect on the audience is wonderful, because it makes them work.’ This argument has been developed by others, including Judith Shatnoff (to whose writing we’ll return), to suggest that (in Peter Matthew Ingrassia’s summary):

the spatial dimensions of multiple moving images [compel] viewers to connect, correlate and seek order from competing simultaneous inputs… The non-linear structure of the spatial narrative requires active engagement in a form of mental editing that takes into consideration split-screen simultaneity and spatiality.

Might we think that such mental editing is especially welcome in lockdown, and with fewer distractions, the active engagement demanded by (screen-)spatial performance is especially appropriate to these dark and difficult days?