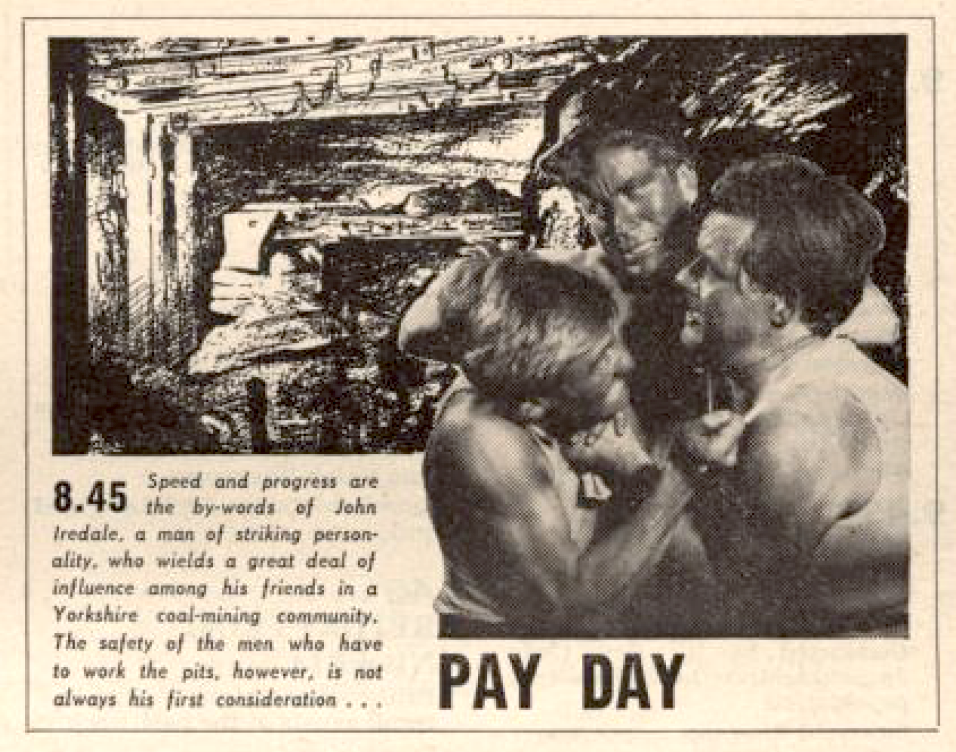 According to the pamphlet promoting the 20 new plays series, Roderick Barry (above) was born in London in 1931 and

left Dartington Hall at fifteen determined to become a professional cricketer. He worked on the ground staff of the MCC at Lords and took a degree in economics in his spare time before doing his National Service in coal-mining. In 1956 he broke his back in a fall of roof at the coal face. A year later he was training to be a film editor, writing in his spare time.

One other source suggests that this perhaps conceals as much as it reveals. In the Guardian on 29 April 1959, presumably before the script of Pay Day was written, a small paragraph is headed, ‘£12,000 damages against the N.C.B.’ The full text runs:

Agreed damages of £12,000 and costs were awarded at Leeds Assizes yesterday to Roderick Barry (26), of Broadhurst Gardens, Hampstead, London, against the National Coal Board. Mr R. Withers Payne, for Mr Barry, said that he was injured by a fall of stone at Park Mill Colliery, Huddersfield, in July 1956, as a result of which he was now a paraplegic.

This handsome, aspiring young sportsman must have spent the rest of his life in a wheelchair. There’s nothing more about him in the Guardian or, apart from the reviews of his single play, in the other online databases I have consulted. Might anyone know what became of him?

Radio Times listings are often suggestive of otherwise lost histories, and that seems to be the case here in the credit ‘from an idea by Sarah Erulkar’. An Indian-born and Jewish documentary maker of the post-war years, Sarah Erulkar started her professional life at the Shell Film Unit on corporate assignments and the celebrated Lord Siva Danced (1946) with Ram Gopal. In the mid-1950s, she worked as a freelance director on a variety of sponsored films and also as an editor at the National Coal Board (NCB) Film Unit. As Katy McGahan wrote in her BFI ScreenOnline profile:

Erulkar’s instinctive artistry, combined with a passion for life and people, brought universal appeal to specialist subject matter, and meant that she was always in demand. Her work brought her a plethora of awards, including two BAFTAs, for Picture to Post (1969) and the prescient environmentally-themed The Air my Enemy (1971).

Sarah Erulkar has been the focus for some richly interesting scholarship in recent years, although as far as I know none of the writing mentions her connection to Roderick Barry and Pay Day. There’s an excellent study of her work and her relationship, both professional and private, with Peter de Normanville, written by Ros Cranston and Katy McGahan, in the essential collection Shadows of Progress: Documentary Film in Post-war Britain edited by Patrick Russell and James Piers Taylor (BFI, 2010). And Melanie Bell’s 2018 article ‘Rebuilding Britain: women, work, and nonfiction film, 1945–1970’, published in Feminist Media Histories, 4(4), locates Erulkar’s career in the broader context of the challenges faced by women documentary makers in these years.

One of Erulkar’s editing credits was on Nine Centuries of Coal, a 34-minute history of mining made by Basic Films for the NCB and released in 1958. Production must have taken place between Roderick Barry’s dreadful accident and the successful conclusion of his legal claim. And we know that in 1957 he was training to be a film editor. Although he does not feature in the credits, might Barry have been Erulkar’s assistant on Nine Centuries of Coal? And could the idea for Pay Day have been suggested by her during a collaboration on this? Further, to what extent might Pay Day, a tale of ‘a battling young miner’, have contained elements of autobiography?

set in and about a coal mine and tells the story of John, a battling young miner, arrogant and aggressively proud of his prowess with a new coal-cutting machine with which he sets a gruelling pace for his shift.

The anonymous Times reviewer (17 October 1960) was appreciative that the BBC series of original commissions had ‘not yet offered concessions to the general taste for cosiness about which we hear so much.’ The column also praised the way in which ‘the general life of the small mining community [was] created with exactitude.’ As for the development of the plot:

[John] works a mechanical cutter, which satisfies much of his demand for power, and has no sympathy whatever for the team that follows him to prop up the roof. When his recklessness is challenged, he gives it complete freedom and causes the death of the little Italian miner who is his deepest admirer. Attempting to ride rough-shod over his sense of guilt, he leaves the village with the gesture of Coriolanus quitting Rome; there is, he feels ‘a world elsewhere’. But somehow the gesture does not convince him.

The producer entrusted with Pay Day was Stuart Burge, who had been an actor before and just after the war, during which he served in the Intelligence Corps. (The impact of their war service on the post-war generation of drama producers is definitely another subject for future research.) By 1960 he was an experienced and admired BBC studio producer-director, with credits including all 13 episodes of an early classic serial, David Copperfield (1956) and a very fine Julius Caesar (1959). He would go on to work with many contemporary writers, including Trevor Griffiths on his serial Bill Brand (1976) and his adaptation of Sons and Lovers (1980). For his later career, especially in the theatre at the Royal Court and elsewhere, see Peter Barnes’ warm Guardian obituary.

Overall, the Times critic was disappointed with Pay Day:

Mr Stuart Burge’s production, with an often crowded screen, brought revealing clarity and movement to the play, making good use of the coal mine interior and machinery. Nevertheless, Pay Day tended somehow to sprawl; the catastrophe is anticipated from its opening but the suspense at which Mr Barry is so obviously aiming and which we should have felt was somehow dissipated.

Anthony Cookman, writing in The Listener (16 October 1960), praised Anthony Booth’s performance as John (at the climax (above), ‘grief, horror, anger and despair shook him uncontrollably’) but could not summon up any more general enthusiasm:

I confess to finding the drama itself more than a little mechanical. Set in a coal-mining community, it depicted the conflict between the old and the new, between progress and stagnation… But the clash between the two groups, resulting as it did in action unacceptable without some sustaining corroboration, never had the reality of the factual scenes at the coal face, and the contrast only served to emphasize the play’s shortcomings.

Which leaves me with one further question. Might ‘the factual scenes at the coal face’ have been shot on film, perhaps benefiting from Roderick Barry and Sarah Erulkar’s connections with the NCB? Or might they even have used library footage drawn from the vivid sequences shot for Nine Centuries of Coal?