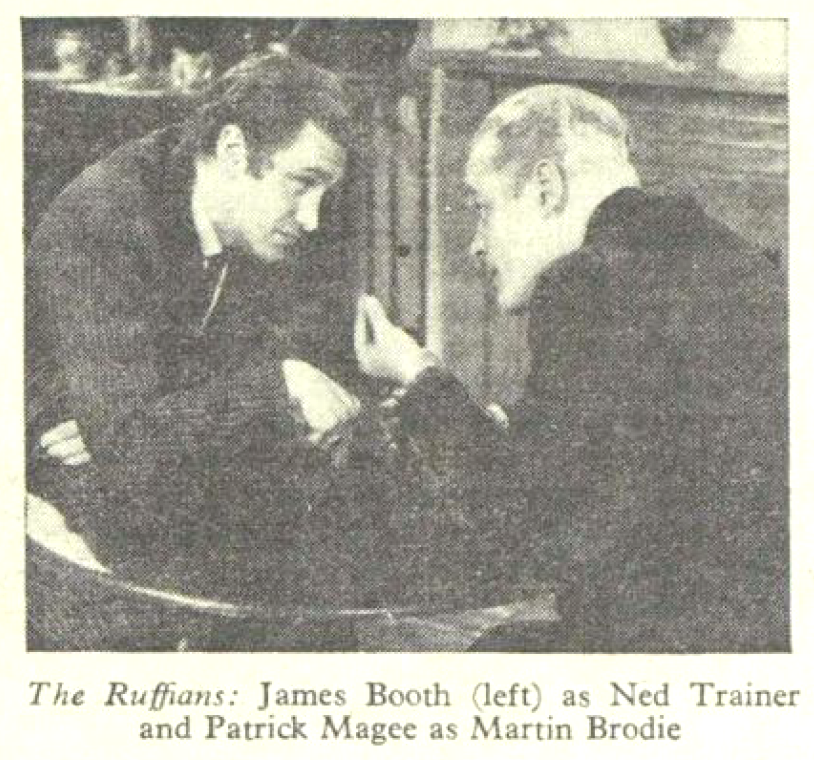 worked in the coal mines during the war and then began a stage career as a student with Perth Repertory Company. He has appeared in both sound radio and television as an actor and played in two Old Vic seasons.

He also worked with Sir Donald Wolfit’s Shakespeare Company and with the English Stage Company at the Royal Court, and as Tise Vahimagi’s exemplary short profile for BFIScreenOnline details,

He began writing for BBC radio and his stage play The Rough and Ready Lot, set in South America in the 1870s, was produced by the 59 Theatre Company in Dublin and the Lyric Hammersmith in 1959, and then adapted for first radio and then BBC television, where Casper Wrede produced it in September that year. The cast alone must have made it irresistible: Alan Dobie, Patrick Allen, Rupert Davies and Jack MacGowran. And the great news is that a recording exists in the BBC archives, although it has not yet been digitised. Irving Wardle in The Listener (1 October 1959) was cautiously enthusiastic:

It is an immensely well-written piece, packed so densely with argument, elaborate characterisation, and historical detail that its action is occasionally in danger of paralysis.

In the audience for The Rough and Ready Lot one evening at the Lyric, attending at the recommendation of story editor and later producer Peter Luke, was the producer of ABC’s strand of single plays, Sydney Newman. As he wrote in his immensely engaging Head of Drama: The Memoir of Sydney Newman, ‘with contributions by Graeme Burk’, 2017:

The play… was hardly anything near what I wanted for Armchair Theatre, but my God, the heightened language, the dynamics of the characters and their punchy dialogue knocked me for a loop. This guy could write!

Newman took the playwright to lunch and explained that he wasn’t interested in a historical drama but rather wanted to ‘something relevant about the changing face of Britain’. To which Owen offered a notion about how Liverpool was changing so rapidly. After all, he said, ‘There are no trams to Lime Street!’ ‘All I could think of to say to that,’ Newman recalled, ‘was, “Hey, that’s a good title.”‘ Four weeks later Owen turned in a script about, in Newman’s words, ‘three ordinary blokes just off a ship in tatty Liverpool… and the girl one of them takes to bed.’ Ted Kotcheff directed, with Billie Whitelaw, Jack Hedley, Tom Bell and Alfie Lynch in the cast. The recording is lost.

Having produced by now over 300 dramas [Newman wrote], this was the first time I reached the kind of drama I believed in. This was the sort of drama that a wide audience would love and identify with… No Trams to Lime Street, the sixth play in the second season, was the key Armchair Theatre production, which metamorphose from just another weekly drama into the series people stayed home to watch and talked about for day.

This original is lost, but remarkably for a television play, No Trams to Lime Street was remade twice by the BBC, once in 1965, also lost, and once in 1970 for The Wednesday Play; this had added songs by Marty Wilde and Ronnie Scott and was taped in colour, but exists only as a black an white telerecording. The script was also published by Hill and Wang in 1963, along with After the Funeral and Lena, O My Lena.

Such was the first version’s success, Armchair Theatre then produced Owen’s After the Funeral in April 1960 and Lena, O My Lena in September, before the writer’s new BBC commission The Ruffians. This was broadcast as the third of the 20 new plays that the BBC had launched to respond to the perceived success of ABC’s drama flagship. Before that, Owen gave a fascinating interview to The Times (4 July 1960) in which he discussed the autobiographical basis of his plays and the politics of his writing:

Liverpool, again, for The Ruffians

(Above is the Radio Times feature article (6 October 1960) for The Ruffians; it’s striking that this BBC publication refers to The Rough and Ready Lot as Alun Owen’s ‘last play… on television’, entirely effacing the considerable successes of No Trams to Lime Street, After the Funeral and Lena, O My Lena simply because they had been produced for ITV.)

The 20 new plays pamphlet set the scene of The Ruffians:

The entire action… takes place in a public house in Liverpool. In the bar is a bunch of young, tough-seeming adolescents; upstairs in hiding, there is a genuinely tough IRA member, a professional in violence. A conflict is inevitable.

The leader of the gang, Ned (James Booth), taunts the publican, Rafferty (Thomas Heathcote), who is concealing his brother-in-law, Brodie (Patrick Magee), who has escaped from prison. Rafferty is unable to call the police to deal with the trouble-makers until he has got Brodie away. Finally there is a confrontation between Ned and Brodie and, in the laconic words of the next day’s Guardian review (10 October 1960), ‘there is a double death’.

Maurice Richardson for The Sunday Times (16 October 1960) worried that ‘despite some solid documentary basis and fresh dialogue, [there was] a regression to melodrama.’ Others disagreed. In that Guardian piece Mary Crozier enthused that the production was ‘a brilliant success in its taut handling of suspense and violence’. And for the anonymous reviewer in The Times (10 October 1960), The Ruffians was ‘a harsh, tough piece that unsentimentally expands an exciting suspense play into one that has things of value to say about violence’.

The leads were also universally praised. ‘James Booth as Ned,’ Mary Crozier reflected, ‘was a villain to watch and watch again.’ For “anon.” in The Times, ‘Mr Patrick Magee, apparently welcoming his release from the half-world of Mr Samuel Beckett, provided all the quiet menace of the deliberate killer.’ Both Booth and Maurice Good were alumni of Joan Littlewood’s Theatre Workshop, and taking the presumably minor role of Mary Farrelly was Margaret D’Arcy. D’Arcy was a remarkable Irish actor who died at the age of 100 in 2018 having lived a colourful life and had significant success in her later years in early plays by Brian Friel and Graham Reid; her Irish Times obituary is well worth your time.

The production of The Ruffians was also critically priased, including by The Times:

Mr. Donald Brewer’s sets, a long room partitioned to provide three bars and the landlord’s sitting room, allowed Mr. John Jacobs, the producer, to effect a gradual and impressive concentration of the action; fluidity of movement in the earlier scenes slowed almost imperceptibly down to provide a final, motionless clinch of wills. At the same -time Mr. Jacobs’s careful control of tempo never lost touch with the fact that this is, for all its overtones, a play of suspense.’

In The Listener (13 October 1960), Anthony Cookman was similarly impressed by the producer’s contribution:

by way of a series of tense, exciting scenes, superbly controlled by Mr John Jacobs in his gradually concentrating action, the impotence of the undedicated when confronted with the calm, fixed certainty of the believer was fixed and analysed.

John Jacobs is an intriguing yet elusive figure. I know little about him apart from having seen – and greatly admired – his studio production of Eugene O’Neill’s Strange Interlude [the link is to my 2015 Screen Plays blog post], shown on two consecutive Sunday evenings in March 1958. Starring Diane Cilento, this presentation of O’Neill’s modernist family saga is strikingly innovative and, along with these encomia for The Ruffians, suggest that Jacobs deserves more critical attention.

One last word about The Ruffians from Mary Crozier, which only makes one regret all the more that no recording exists:

The play will perhaps set people arguing again about whether Liverpool should be painted so black, but I can only say that whereas most television plays of crime and violence seem to me largely unreal, The Ruffians was all of a piece, perfectly consistent, and entirely convincing.

PS. Doubtless there are those who know far more about Alun Owen than I do, and I’d love to learn more about him and this play, and indeed about John Jacobs, so do please contribute in the Comments below.