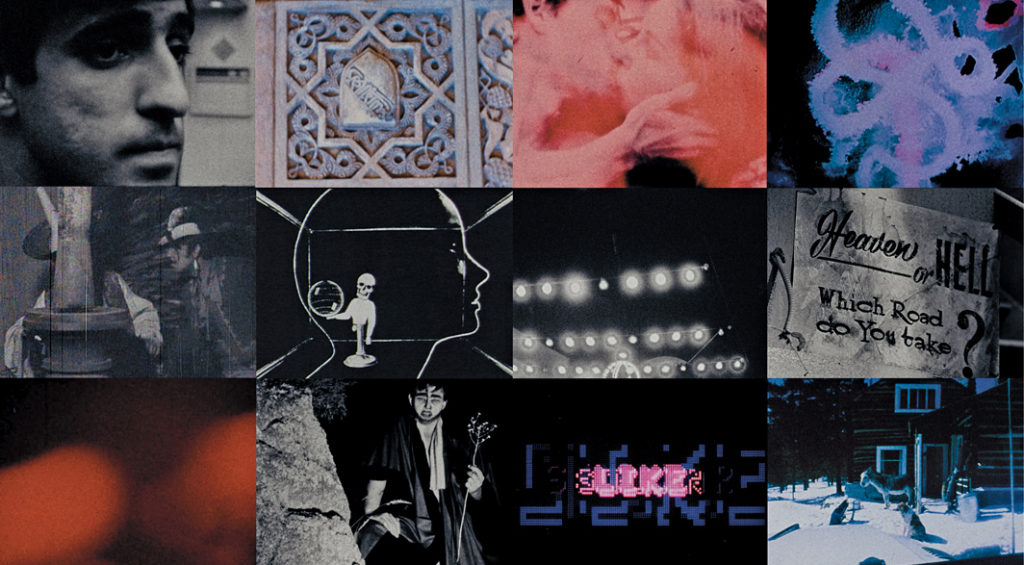 John Wyver writes: Todd Haynes’ music documentary The Velvet Underground, about the legendary band and the cultural context of the United States in the 1960s and ’70s, has had a limited theatrical release and is now available on Apple+. I’m not proposing here to contribute a full review of the film, but I do want to use the above framegrab to reflect on what I think is interesting about the film – and also what troubles me about it.

By way of introduction, this is the official trailer:

And here are a couple of interviews with filmmaker Todd Haynes, both of which engage with the clearance and use of archive elements:

• Todd Haynes reveals the two biggest gets of his The Velvet Underground documentary: Jean Bentley for Indiewire relates the director talking about securing permission for the extensive use of the Andy Warhol films and also signing up John Cale as an interviewee…

• Interview – You’ll be my mirror: … and this is a really valuable interview by Amy Taubin for Artforum.

Christina Newland’s online article for BBC Culture is also well worth a read, as is A.O. Scott’s informed review for The New York Times; for Scott, the film is ‘a jagged and powerful work of art in its own right, one that turns archaeology into prophecy.’

There is lots that I like about the film, although it’s at least 20 minutes too long. The interviews, shot against neutral colour grounds, are for the most part really strong, and I particularly enjoyed John Cale, Mary Woronov and Jonathan Richman. And there’s no voice-over narration, just occasional captions, including one clunky (since it’s singular) piece of exposition about who lived in a Ludlow Street apartment in 1964.

As the interviews above relate there is next-to-no performance footage of the Velvets, but the film makes up for that with a torrent of other archival elements from the 1960s and ’70s. If nothing else, and as the near-endless end credits witness, this is a masterpiece of research and access, of clearances and legal agreements. The rights costs must have been enough to make several low-budget indie features of the kind that Todd Haynes cut his teeth on.

This archive is integrated throughout in a variety of split-screen frames, often pairing two channels side by side (in a clear hommage to Andy Warhol’s Chelsea Girls, 1966, which makes a number of appearances), but also fragmenting the screen into grids of three or more moving images, albeit in relatively unsophisticated ways. On occasion grids of up to 12 moving images appear, as is illustrated in the header screen grab.

As regular readers are aware, I’m fascinated by split-screen styles, both as a critic (see blog posts here, here and here) and as a practitioner. With colleagues I have explored this language in our documentaries Drama Out of a Crisis: A Celebration of Play for Today, 2020, and Coventry Cathedral: Building for a New Britain, 2021, and still available on BBCiPlayer.

One key difference (apart from budget and the lawyers) between The Velvet Underground and our work is that this new film, while commendably working with their original aspect ratios, situates the archival streams simply against a black background. With my collaborators Todd MacDonald and Ian Cross, it was important for us to create a frame of appropriate, responsive and elegant graphics in which to place our archive, and in The Velvet Underground I missed such care and attention.

But I have a much more substantial problem with the documentary and its use of archive.

Included is an extraordinary range of archival film, some of it from standard sources but much of it from the American avant-garde. In addition to the use of Warhol’s films (especially the Screen Tests, 1964-66, which make a huge impact), there are quotations from the films of Jonas Mekas, Kenneth Anger, Jack Smith, Marie Menken, Tony Conrad and many more. Indeed, if you’re familar with this tradition, there’s a nerdy party game in trying to identify the filmmakers whose work is included in the header image.

Very little of this material is identified in the body of the documentary, apart from elements of Warhol’s work and that of Jonas Mekas. There are no captions to any of it. Moreover, it is for the most part (and again Warhol’s work is an exception here) edited with little sense of its integrity. The extracts are never given a chance to establish their own presence, to play in their own space, to weave their own magic, to exist in their own terms.

Rather, all of this extraordinary creative work is subsumed into a kind of period visual ‘buzz’. An endlessly rich corpus of alternative, radical, challenging, complex, beautiful, poetic, disturbing filmmaking becomes simply period decoration, and occasionally loosely metaphorical commentary, for the narrative of the band.

The archive of the avant-garde is appropriated and subsumed by Todd Haynes’ auteurist vision, and at the end of the day that feels both unearned and disrespectful.