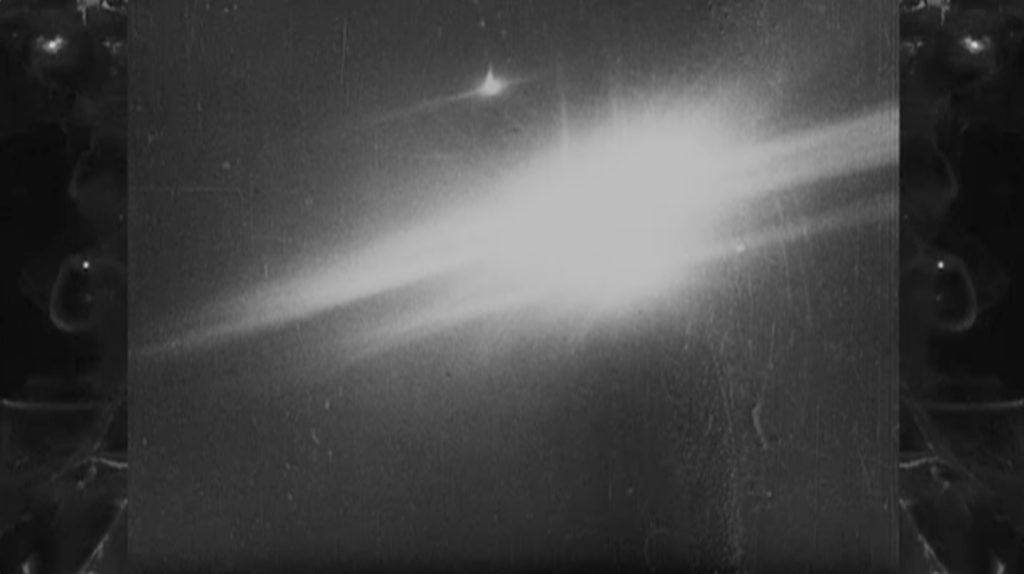 John Wyver writes: As the headline indicates, this is the third post in a series about our new film Coventry Cathedral: Building for a New Britain. Following an introduction and a discussion of the opening sequence, today I reflect on the documentary’s second ‘chapter’ and of the archive featured in it. As I acknowledged yesterday, since you can’t yet access the film these posts may be frustrating and/or simply like inappropriate ‘spoilers’, and if you find them so, do please return after the documentary is first broadcast on Wednesday 9 June on BBC Four.

After Ian Cross’ titles, this section begins with an extract from A City Reborn, a 1945 Ministry of Information documentary that can be watched in full and for free (if you are in the UK) on BFIplayer. This beautifully shot film, scripted by Dylan Thomas and directed by John Eldridge, features more significantly in the section that follows this one, and I’ll return to it in the next post.

When you watch our documentary you might note that we use the opening of A City Reborn with its somewhat stentorian narration and then carry this resonant audio on across our edited enhancement of the images with split-screen images of Coventry’s industry from other sources. Yet I am forever talking about ‘respecting the integrity’ of the archive. Making a film like this is all about contradictions.

The centrepiece of this chapter is an extraordinary Nazi newsreel that purports to have been shot in the skies above Coventry on 14-15 November 1945, the night of the main bombing raid. This sequence, a section of which we run at 1 minute 12 seconds without interruption or embellishment (apart from subtitles), is from an edition of the German newsreel Die Deutsche Wochenschau (above, and header image). Produced by UFA, this was a weekly news magazine shown widely in Germany from June 1940 until the end of the war.

Fragments of this segment have been included in documentaries about the Blitz in Coventry but we felt it was so significant that it should be run almost in full. The high resolution digital scan that we used was licenced from the Russian archive Net-Film, and it is deeply and rather beautifully marked by historical traces of deterioration of the original. There are moments when we could almost be watching a Bill Morrison film.

Of course the newsreel’s authenticity has to be interrogated as well. The aerial shots of a conflagration could well be Coventry but it is impossible to be certain. As for the brief shots of the aircrew, these might well have been filmed at another moment, perhaps when the plane was on the ground. But the propagandist message is all too clear – and still somewhat startling.

After the bombing is over, we transition to a single shot from Humphrey Jennings’ 1941 documentary The Heart of Britain. This remarkable 28-second pan lays bare the devastation of the city, although we have stripped it of the stirring music that accompanies it in the original and added something plainer, more plangent, together with a bare line of narration about the numbers killed and seriously wounded that night.

Sitting in the back of my mind throughout the production of Coventry Cathedral was a short contribution to the MediaCommons site inmediares by the peerless archivist and theorist Rick Prelinger, ‘Fear of the document’. Accompanied by a short video of historical home movies, Lost Landscapes of Los Angeles: Suburb and Beany’s Drive-In, Long Beach, Rick’s article is a brilliant distillation of the importance of respecting archival fragments for their unique and mysterious wonders and not (always) forcing them into our new narratives:

Documents are tricksters. They frame what they choose instead of what we want to see, begin too early or too late in an event, lapse into indecipherability or overmodulation, fail to contribute to our predetermined storyline, threaten to drag our films into undramatic territory, say too little or reveal too much, offer aid and comfort to our enemies. As filmmakers we proudly manipulate their form and harness them into compliance because they refuse to conform with our sense of what they should show and say. Documents threaten us with loss of control over our films. Documents frighten us.

Rick argues that as viewers we should seek to access ‘the unsweetened raw documents’ alongside or instead of ‘our painstakingly assembled, scripted and scored documentaries, [with] our silver-voiced narrators and our meticulously composed music’. The challenge of this in relation to a mainstream if (as I recognise all too well) niche documentary like Coventry Cathedral is encapsulated for me in the juxtaposition of the extract from Die Deutsche Wochenschau and the pan from The Heart of Britain.

We have aimed, by running these traces at lengths unusual in documentaries of this kind, to respect them as ‘raw documents’, and yet we have added a sliver of narration and low-key music to strengthen them (as many would argue) as story-telling elements. This tension is one that runs for me throughout Coventry Cathedral, and it’s one we’ll return to in future posts and, I hope, in discussion prompted by the film. In the meantime, you can read Rick’s most recent elaboration of related ideas in ‘Assembly over algorithm – resisting overnarrativisation’, just published in the open access (and essential) journal World Records. Also, you should definitely follow Rick on Twitter: @footage.

Our use of still images in Coventry Cathedral is modest, in part because the moving image material is so extensive and rich. But for this sequence of the devastation wrought on Coventry’s medieval Cathedral, we have included beautiful photographs from the 1909 publication The Churches of Coventry by Frederic W Woodhouse [link to the volume in digital form via archive.org]. We have paired these with news photographs of the ruins taken soon after the bombing, licenced from Alamy (who as a photo library were a particular pleasure to work with).

Towards the end of the section is the first substantial extract from a film also called Coventry Cathedral, made as a corporate film by the builders Laing and included here courtesy of the John Laing Charitable Trust. Again, this is a key source to which we’ll return.

Yes, I have some regrets

There are many ideas and images that I regret that we simply could not include in the film. Often the reason was simply that there was too much to squeeze into the 74 minute 34 second running time. But there are also arguments and viewpoints that I found just too complex to do justice to, and one of these is what I came to think of as the ‘aestheticisation argument’.

In her unrivalled study Coventry Cathedral: Art and Architecture in Post-war Britain, Louise Campbell writes of

the way in which the Coventry raid, which was first discussed in terms of a crime against humanity, soon became aesthticized as a crime against the city(symbolised as in Victor Hugo’s Notre-Dame de Paris, by its cathedral) and thus as a simultaneous blow to religion, architecture and history. The contemporary imagery of the official war artists, for whom architectural subjects had acquired a particular importance, contributed to this.

Louise Campbell discusses in particular two well-known paintings by John Piper, one of which is Coventry Cathedral, 15 November 1940 in Manchster Art Gallery, as well as Randolph Schwabe’s Coventry Cathedral, November 1940, done like the Piper’s as a commission by the War Artists Scheme. Of the former pair, Campbell says, ‘Although dramatically coloured, they maintain an emotional distance from their subject which made them difficult to use as pictorial propaganda’. I regret that we couldn’t find a place for either of the Pipers, nor indeed for Schwabe’s less well-known pencil and wash drawing, which we even licensed from the Imperial War Museum but then could not make it work in the edit. I include it here instead.