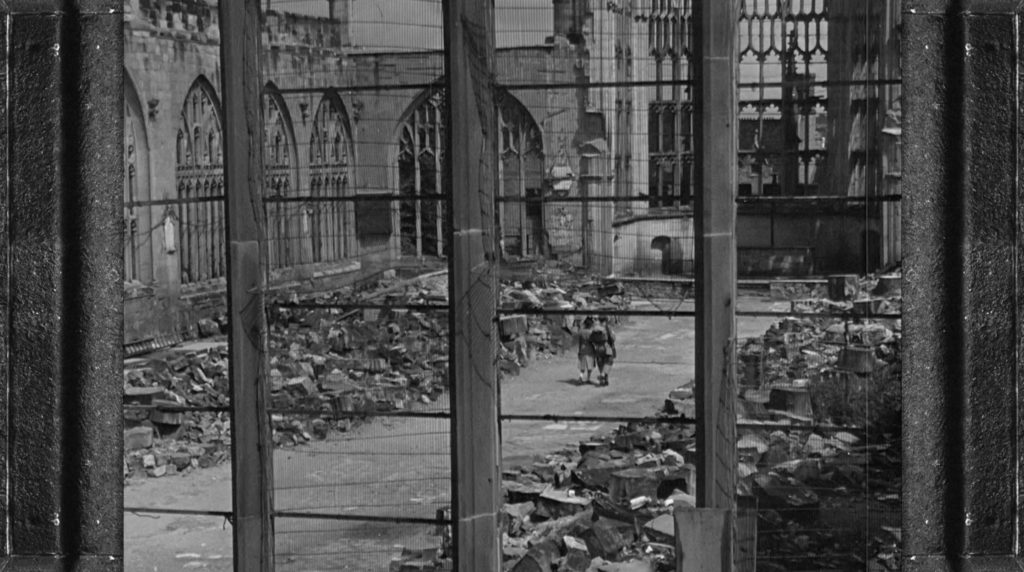 John Wyver writes: Since my third post in this series about our forthcoming film Coventry Cathedral: Building fo a New Britain (the first two are here and here) I have been thinking about the eccentricity of writing moderately detailed commentaries to a film that people can’t yet see. Although it’s hardly appropriate to apply the idea of ‘spoilers’ to these notes, I recognise that people may think it inappropriate for me to determine responses ahead of a viewing. So perhaps the best thing to do is to save up these posts until after transmission (9pm, next Wednesday, 9 June, BBC Four). But indulge me publishing them now, please, since that feels for me the best way to get them written.

This post reflects on the archive in what I think of as the second and third ‘chapters’ in the film, following on from an introduction and then the first that details the night of the bombing of Coventry on 14 November 1940. The next chapter looks at the reconstruction of Coventry immediately after the war, and the one that follows outlines the debate about how the old cathedral should be rebuilt, the competition to select an architect, and the choice of Basil Spence.

One change from the previous posts is that I now have access to a better-quality version from which to take screengrabs – and eventually I’ll return to the previous posts to replace the low res ones there. Also, I intend to add notes about further reading to those earlier posts, and to these as I go along.

Central to this chapter is the 1945 Ministry of Information documentary A City Reborn, which can be viewed in full and for free by those in the UK on the essential BFIplayer. Scripted by Dylan Thomas, and as the opening card says ‘made with the guidance of the City Council of Coventry’, the film is centred on Will, a soldier on leave to see his fiancé Betty. Will is played by the actor Bill Rowbotham, who much later in life, and under the name Bill Owen, would achieve fame as Compo in Last of the Summer Wine.

Beautifully photographed in high contrast monochrome by Jo Jago (who later did second unit photography on features including Night and the City (1950) and The Sound Barrier (1952)), the film combines a fiction of Will and Betty looking forward to life together after the war with earnest discussions of town planning and pre-fabricated house building.

Particularly striking is the use of the Cathedral ruins (above, and header image) as a symbol of the war and as a reminder of why Will and millions like him have been fighting. The forthright narration hammers home the message:

The planners of Coventry believe that cities only exist for the use of people. They believe that everyone shoulod feel it’s worth his while to make his city, or town, or village, a good, decent, pleasant place to live in. In war we work together to defeat a common evil. In peace we must work with no less vigour for the common good.

The optimism of this moment also shines through a fragment of home movie footage filmed in 1945 by Matthew Nathan and recently digitised by the Imperial War Museum film archive. The soft colours and vivid simplicity of these moments shot at the 1945 ‘Coventry of the Future’ exhibition feel very precious.

Will and Betty also visit this exhibition (below) and praise the model of the city centre. ‘The city had better be good too,’ Will says. ‘It’s where we’re going to live.’

The chapter then uses footage from a number of sources, together with comments with Louise Campbell, to outline how the progressive architect Donald Gibson re-shaped post-war Coventry. We have aimed to give a sense of the building programme for schools, and the fundamental importance attached to state education, with split-screen montages like the complex one below.

We also use an extract from ATV’s 1962 programme Out of Burning which celebrated the opening of the new Cathedral. Presented by Kenneth Clark (‘K’ to his friends, and us), this is mostly a report from the Cathedral itself which was recorded on videotape, and then edited, as an outside broadcast, which at the time was a technically complex operation. But the programme also incorporates a film sequence shot in ‘The Precinct’, the innovative pedestrian shopping area at the heart of Gibson’s plans for the city.

K speaks in a confiding, slightly dismissive tone over these shots, celebrating the character of the architecture and its appropriateness for the age, but distancing himself from any personal enthusiasm:

No high, no low. No dark shadows. Nothing outstanding. Well, you can’t expect it to look like Florence or Rome – or even Edinburgh. This is Festival of Britain architecture. Light, trim, democratic.

A City Reborn, to which we return, is significantly more positive about the brave new post-war world. As Will and Betty walk off into an urban sunset to the strains of Bach’s ‘Toccata and Fugue'(above), a peroration makes a commitment to their generation:

Every man must believe in the good and happiness that is to be shared. To be shared equally.

Towards a New Cathedral

We open the following chapter with shots from an early BBC Television Newsreel report of Princess Elizabeth visiting Coventry on 22 May 1948. British television’s first regular news programme, the thrice-weekly Television Newsreel had only begun in January that year (it was to run until July 1954) and because it was shot – like cinema news magazines – on film, many editions have survived. It’s a resource that has yet to be properly documented and researched, but it’s full of wonders like this story.

The visit to the city by the Princess, who was there with her youthful chiselled accent to inaugurate the new shopping precinct, was also covered by the cinema newsreel crews. The British Pathé rushes from the day are available to view online as well as the company’s finished report. In the midst of the rushes is a moment when, as the camera continues to roll, the operator changes the lens (below), and our inclusion of this is part the film’s interest in the materiality of the archive. I’m fascinated by how historical film and television carries the traces of its own production, and this slip is a particularly exquisite example.

On to the story of the competition for an architect to rebuild the Cathedral. This sequence is told mostly in stills, including two extraordinary drawings (you’ll have to watch the film to see these) of the vision of architect Giles Gilbert Scott who towards the end of the war was asked to prepare designs. But these were rejected and a competition was organised in 1950. Perhaps one of the most surprising aspects of the film is just how different the new Cathedral could have been, whether in line with Scott’s vision or as imagined by younger architects like Alison and Peter Smithson (an image of whose proposal is included) or Colin St John Wilson.

As a tiny footnote illustrating the challenges of making an archive-based film like this, I very much wanted to illustrate St John Wilson’s design, submitted with his friend Peter Carter. But there are currently no high resolution images available (which are necessary to reproduce properly on the screen), and nor could I track down the estate to secure the similarly necessary copyright permission. Production is often as much about such frustrating dead ends as it is about triumphal discoveries.

It’s hardly a discovery, since it sits happily in the wonderful BBC Archives, but I was particularly pleased to include a moment of George VI’s speech opening the Festival of Britain (below). I wanted to underline the links of the new Coventry and its Cathedral with the social and cultural ideas that underpinned the Festival, as K suggests in his response to The Precinct. But I was also keen simply to showcase this rare survival from the outside broadcast coverage of the Festival.

This fragment of the King, which lasts less than a minute, is a recording of BBC television’s live transmission, preserved in what is otherwise a conventional film report about the buildings on the South Bank. The BBC broadcast numerous programmes as outside broadcasts from the Festival’s main site, but I believe this is the only fragment of those to survive.

As announced during the Festival summer, Basil Spence won the Cathedral competition, and we have included both a part of an interview with him shot for the 1962 BBC documentary An Act of Faith (below), about which I’ll have much more to say in a future post, and an exchange with K from Out of Burning. Spence’s personality, his voice and his presence, come through strongly from these extracts, and from others in the documentary. .

Among the stills we have included are two from the Alamy library, one of which is below, of people gathered in the Cathedral ruins looking intently at the model of Spence’s design. One of the books that informed the making of our film is Tom Allbeson’s recent study Photography, Reconstruction and the Cultural History of the Postwar European City (Routledge, 2020). Allbeson discusses another photograph, as reproduced in Picture Post, of Queen Elizabeth with Spence looking at this model. More generally he offers a nuanced and revealing discussion of the ways in which ‘the new cathedral is framed as a positive visual riposte to the negative image of wartime destruction.’ As he writes:

[The] process of presentation and representation (of showing and seeing) was central to making the symbols of Coventry meaningful and effective, and to connecting the site, its ruins and its associated relics with the Cathedral’s assumed mission of postwar peace-building.

We might note also that the importance of people looking at architectural models and envisioning the future can be similarly recognised in the shot of Will and Betty gazing hopefully, expectantly at the (model of) Coventry of the future.

Overall, Allbeson is exceptionally good on the visual culture of postwar reconstruction and much of his analysis is borne out by the moving image archive, although he restricts his focus to still images. You can get a strong idea of his ideas in this online lecture that he gave for the Royal Photographic Society:

The final section of this chapter recounts the Labour council’s attempt to postpone the building of the Cathedral and the action of the Tony Minister of Works, David Eccles (below), to issue the licence for its construction. Our ability to include the briefest of shots of Eccles was made possible by being able to search the BBC Archive for a shot of him from an edition of Television Newsreel and to access this and access straightforwardly. I have written elsewhere about the wonders of the archival systems at the BBC and everything that we benefitted from when making Drama Out of a Crisis: A Celebration of Play for Today was similarly essential on this project.

There’s no moving image archive of the letter to the Mayor of Coventry that Eccles wrote to accompany the issuing of the building licence, and so w have used the way in which this was quoted in An Act of Faith. Eccles suggested that the construction would ‘prove that English traditions live again after the Blitz’, and the sense of English-ness and traditional ways of working will run through the next chapter. His remarks also highlight how the tale of Coventry Cathedral is embedded in both the aspirations and anxieties of the 1950s, which similarly echo across so much of the moving image archive:

The threat of far worse destruction is with us today, demoralising and corrupting our thought. We have never had as great a need for acts of faith.