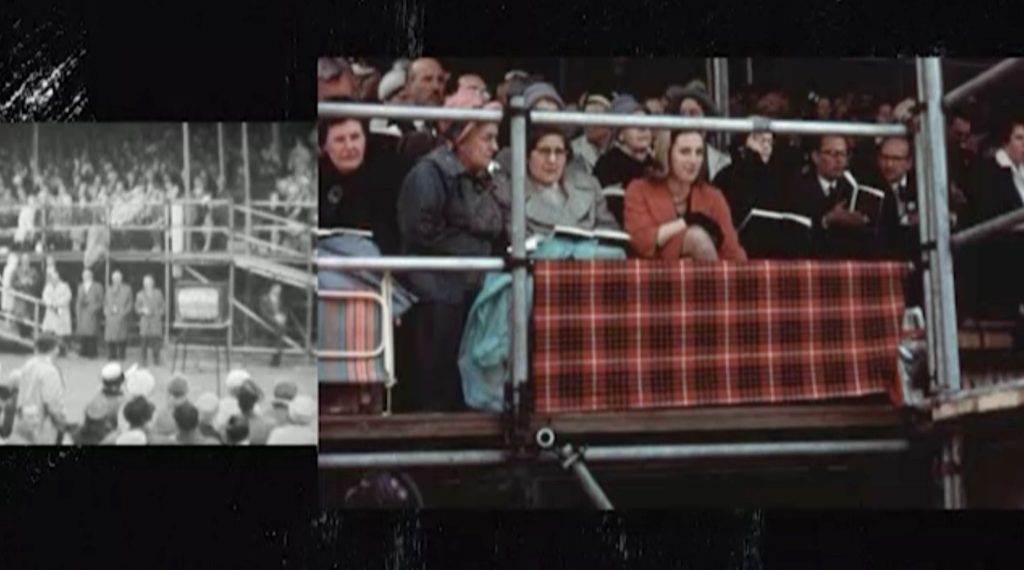 John Wyver writes: Having yesterday introduced our new film Coventry Cathedral: Building for a New Britain and promised a series of posts about the project, today I begin with a detailed discussion of just one section of the film and of the archive that it features. I recognise that since you can’t yet access the film itself this may be frustrating, and it may be that the post is something to return to after the documentary is first broadcast on Wednesday 9 June.

I’m also cautious about over-explaining the film and rendering too literal material that I hope retains poetic qualities. Forgive me if you feel that’s the case. All I can offer in reply is to say, stop reading. But it may just be that this and subsequent posts will both whet your appetite for the film and enhance your eventual viewing.

The header image is a framegrab from the opening sequence which runs for 3 minutes 57 seconds up to the end of Ian Cross’ beautiful animated titles. (I’m not otherwise going to comment in detail on the graphics today, but I’ll return to them in a later post.)

We start with the on-screen clock that was fortuitously recorded off-air just prior to the start of the The Consecration Service of Coventry Cathedral, broadcast live on 25 May 1962 by BBC Television (this is before the start of BBC2 when Radio Times cost the equivalent of just over 2p). The first thing you hear is the distorted music as the videotape recorder (VTR) starts up, and I enjoy the slight sense of disorientation that will come at 9pm on transmission night as viewers are faced with a retro clockface ticking down to 3.15pm.

I also enjoy the joke of this echoing the hidden digital clock on the master recording that counts from 30 seconds to 3 before the start of the programme. Every programme carries such a clock which facilitates it being correctly cued into the schedule. But perhaps most importantly these opening moments establish the centrality of moving image media to the story of the Cathedral and to the way in which it lives on in the archive.

Cut to a 405-line monochrome image that, accompanying a presentation announcer of the time, tilts down the tower of the ruins of the old Cathedral. This substantial relic of the medieval past is returned to time and again throughout the documentary, and in the closing frames it will undergo a magical transformation. The archive shot is kept in its original aspect ratio and is accompanied by the first of Ian Cross’ many many graphical backgrounds specially created for the full length of the film.

The image itself is low-definition with visible scanning lines, and the cuts within it are far from smooth. From the very beginning we are respecting the historical and material qualities of the recording. As I indicated in yesterday’s post, the specifics of the moving images that relate this story, together with the technologies that created and distributed them to audiences of the day, are fundamental throughout. The textures of the images, their definitions and colours, their stability or lack of it, their joins and imperfections (or what to eyes today might appear as such) form a key strand of the film, just as do the different audio qualities and sound glitches that can be heard throughout.

The foregrounding of contemporary media continues as the scene changes to the start of Consecration Service broadcast which begins outside the Cathedral. (The broadcast was produced by Barrie Edgar, father of the playwright David Edgar.) The crowds on screen are in specially built stands in the ruins, and they have come to watch the BBC relay from inside on what commentator Richard Dimbleby calls ‘big television monitors’. But the screens are little bigger than domestic television sets. A panning shot across the stands (which I have to acknowledge I find thrilling each time I watch it) is supplemented by brief images of the crowd shot on 16mm colour stock in the first of our split-screen sequences (header image above).

These vibrant colour fragments (the one of the red chequered blanket lasts barely 3 seconds in the rushes) come from one of the great discoveries during the production of our film. They were shot by local architect and filmmaker Barnard Reyner who was commissioned by the Cathedral to document its construction, and while the full story of this material must wait until a later post, it has remained unseen for the past fifty years and more.

Crowds, crowds, crowds are one of the key motifs of the film. Later we’ll see them welcoming Princess Elizabeth to Coventry in 1948, celebrating the laying of the Foundation Stone in 1956, attending (albeit in fewer numbers) the Blee-Spence wedding in 1959 (one of my favourite sequences), watching the installation of the Cathedral’s spire, and then again at the Consecration. Faces, coats, hats, postures all speak so poignantly and vividly of the times, and are revealing about class, prosperity and politics in ways that could never have been intended by the filmmakers.

Dimbleby’s introduction to the service leads into an extract from a programme that was broadcast earlier in the week of the Consecration, Out of Burning. This is a 45-minute documentary made by the local ITV contractor ATV as a recorded outside broadcast with, as can be seen above, Kenneth Clark as presenter. Clark – or K to his friends, and as we will treat him here – was by this point a familiar figure as a broadcaster since, after a distinguished career as Director of the National Gallery, first Chairman of the Arts Council, and Chairman of the Independent Television Authority, he had since 1958 been presenting programmes about artists to help ATV fulfil its public service responsibilities. Towards the close of the decade, of course, he would write and present the profoundly influential BBC series Civilisation (1969).

K’s patrician confidence before the camera is apparent from his first words, despite the scarf that hangs in a somewhat eccentric manner from his left wrist. Later in the programme we’ll see him interview architect Basil Spence, reflect on the Gothic glory of the tower, and proffer an unenthusiastic judgement on the Cathedral’s font, a moment that we also tease in this opening sequence, below.

Following Dimbleby and K, giants of broadcasting from this time, come audio contributions from two of the voices of today that we recorded for the programme. Louise Campbell, author of the most rigorous and complete study of the Cathedral, Coventry Cathedral: Art and Architecture in Post-war Britain (long out of print but the major printed influence on the film), and Gillian Blee, Basil Spence’s daughter, introduce certain of the themes of the programme, taking us beyond the Cathedral into post-war Britain more generally. These ideas are developed further in the first element of narration from Pauline Black, lead singer of the Coventry 2-Tone band, The Selecter. In case you were wondering, our film has no on-screen presenter, which makes it a rarity among specialist factual programmes these days.

In these sequences that begin to explore the broader social and political context of the time we draw on other documentaries from the 1950s and early 1960s, and most especially from Coventry Kids (below) directed in 1959 by Philip Donnellan. Donnellan’s film, made for BBC Television, is an extraordinarily rich portrait of the city and another of the major sources for our film. I intend to hymn its beauty and boldness in a later post.

Woven amongst this historical material are images that we shot in the past months in and around the Cathedral. Director photography Todd MacDonald and I spent two days there at the end of February, shooting with a Jimmy Jib operated by Bernie Totten, and then a day at the end of April when we filmed both inside and outside the building with drones provided by Impact Aerial. We hope that these shots go some way to revealing the glories and greatness of the building.