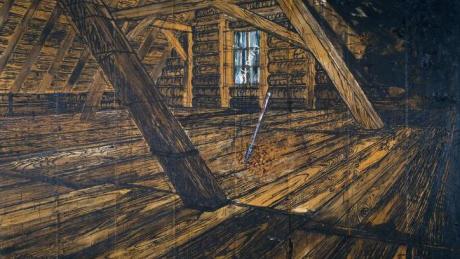 You have just one week to catch the truly remarkable Anselm Kiefer exhibition at the Royal Academy of Arts, which closes on 14 December. In recognition of this we have posted on our YouTube channel a new extract of our 1987 Channel 4 series State of the Art. The extract, which is taken from History, the first episode of the six-part series, features Kiefer’s work set against the German landscape. The full series is available to purchase on DVD, and I wrote in detail about the its production here. Further extracts, which we have recently re-mastered before posting again on YouTube, are online featuring Antony Gormley, Cindy Sherman, Joseph Beuys and Jean-Michel Basquiat together with his friend Andy Warhol. Below I recall the making of the series and of the production’s encounter with Anselm Kiefer.

State of the Art was made during an intensive and immensely exciting period of 18 months in 1985-86. The originator and writer of the series, Sandy Nairne, worked with director Geoff Dunlop and myself to craft television’s first major series about genuinely contemporary visual art, and we had a budget from Channel 4 and the German broadcaster WDR which allowed us to film in the United States, across Europe and in Australia. Channel 4 wanted something bold and distinctive and challenging, and we were determined to give them just that and to re-imagine what a television arts series could be.

Sandy’s conception was that the series should be about contemporary art in the context of broad social and intellectual concerns – hence our sub-title ‘Ideas and Images in the 1980s’. We haunted the ICA and its bookshop as the likes of Jean Baudrillard and Jean-Francois Lyotard offered up their often gnomic reflections on our post-modern moment. And we eventually settled on six themes for the individual episodes: history, value, imagination, sexuality, politics and identity. For each film Sandy identified five key artists whose work and thoughts we hoped could illuminate an aspect of these ideas.

Even nearly thirty years ago there was no artist who better exemplified an engagement with history than Anselm Kiefer. Like many others, we had been introduced to his work by the 1981 Royal Academy exhibition A New Spirit in Painting. The Tate Gallery, as it then was, had purchased the Parsifal triptych in 1982 (which is on display at the current RA exhibition), and his work was a strong presence in shows and art fairs as we were undertaking our initial State of the Art research.

With each of Sandy’s selection of artists we hoped that they would grant us an interview, allow us to film in their studio, and permit us to reproduce a number of their paintings or sculptures. Joseph Beuys was very happy to do this for us, as was Howard Hodgkin, Barbara Kruger and all the others. Excepting only Kiefer. As I recall things, the German artist was very happy for his work to be included in the series and he received Sandy and Geoff with great courtesy to talk with them about his concerns. But he resolutely refused to appear on film. He had not done so before and indeed there were relatively few interviews with or photographs of him, apart from those which he himself took as part of his practice. He was adamant that he wanted people to focus on his art and not on his personality.

Which is why the section in State of the Art about Kiefer is rather different from each of the other sequences with a contemporary artist. At its core are Kiefer’s works filmed in the home of the art dealer and collector Heiner Bastian and in what was then the Anthony d’Offay Gallery in Dering Street. Charles Saatchi had by far the best private collection in Britain of Kiefer’s paintings and he loaned us several which we transported to a studio near King’s Cross to film them. (We were obsessed – and I still believe rightly so – with filming original artworks and not relying on transparencies, and so we went to enormous pains to secure access to art that was in storerooms or private homes.)

Juxtaposed with Kiefer’s vision in State of the Art are a number of German landscapes, beautifully filmed (on 16mm) in the snow by director of photography Jeremy Stavenhagen. And there are the series’ trademark quotations, in this case by Gunter Grass and (in translation) Paul Celan, read by different voices, which weave ideas around the paintings. I think the allusive and suggestive result remains one of the most successful parts of the series, and I am delighted that we can finally share it more widely on YouTube – and for the next week only tie it to the Royal Academy exhibition.

How different, however, is the artist who appears apparently with glee with Alan Yentob in Imagine’s very good documentary, Anselm Kiefer: Remembering the Future, which remains on BBC iPlayer for the next 12 days. There is very little reticence on Kiefer’s part here about speaking and showing his art. And how different again is Sophie Fiennes’ truly exceptional 2010 documentary Over Your Cities Grass Will Grow, which is also available on DVD and for which this is the trailer: