Papa Brecht and his (British) offspring 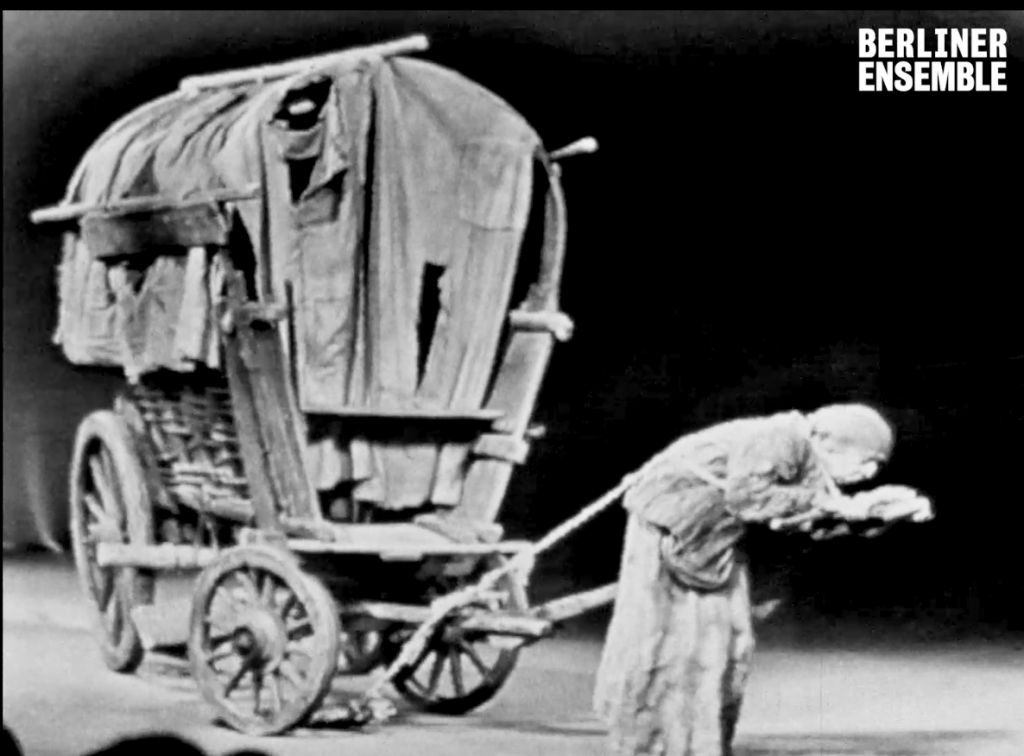 John Wyver writes: you have until Thursday evening to witness online, thanks to today’s Berliner Ensemble, a truly astonishing as-live recording made in 1957 of Bertolt Brecht’s landmark production of Mother Courage and Her Children. Directed by Brecht in 1949 in Berlin, by then of course in the GDR, this was the founding presentation of the Berliner Ensemble, the company established that year by the playwright and his second wife Helene Weigel, who plays Mother Courage.

And this is the main production brought by the Berliner Ensemble to London’s Palace Theatre in the summer of 1956, a visit that profoundly influenced numerous strands of British drama across the following decades. Shot with multiple electronic cameras from the stage of the Theater am Schiffbauerdamm, the Ensemble’s home from 1954, this screen version is vivid, vital and immediate (and even without subtitles strikingly accessible to non-German speakers), and it offers a unique opportunity to get as close as is possible to being there, whether in Berlin or London, in the mid-1950s.

I am in no sense a Brecht scholar, and there are many writers who are better qualified to write about this revelatory recording, including Holger Syme, who as @literasyme Tweeted an informative thread about it over the weekend (and who I hope is going to discuss it online in more detail).

Syme points out that the recording was previously all-but unknown, although a 1960 feature film version of the production has been seen quite widely. Apparently just before his death in August 1956 (which occurred only days before the London visit), Brecht expressed his interest to the artistic director of the GDR broadcaster DFF, Heinz Adameck, in having television versions made of his stagings. ‘Brecht’s hilariously insane idea’ Syme notes, ‘was to have FIFTY cameras recording all facets of a performance live and then edit them together (at a time when the DFF owned a total of four broadcast cameras…).’ Nowadays, perhaps, a visionary media producer might just have made all those cameras available, along with the editing time such an assembly would take.

The recording was perhaps directed for the screen by the film and theatre director Erich Engel, who was one of Brecht’s key collaborators, including on the staging of Mother Courage, although there are no closing credits and Google translate is a little hazy in its English rendering of the Berliner Ensemble’s website. Three cameras appear to have been used in the auditorium – one centrally-placed towards rear of the stalls for wide-shots, and two that are closer and to the sides, which offer medium-shots; there are no close-ups, and the following frame is about as close to the characters as we get.

The cutting rhythm is far slower than we are used to today, and the image quality is variable, with the wide-shots suffering from lower definition. The audio is distant and somewhat echo-y (no radio mics in those days) but perfectly clear, and from time to time, thanks to laughter and applause, we are aware of the theatre audience. We also see the backs of spectators’ heads in many of the shots. For a recording from more than 60 years ago, the overall quality is pleasingly good, with minimal ‘ghosting’, and the recording has clearly been expertly restored.

The images would have been mixed live and the recording must have been made (before videotape was widely available) by a process known as tele-recording or kine-scoping that involved filming, usually with fixed 35mm cameras, the monitor on which a live stream was being shown. Tele-recording itself only came into use by the BBC in early 1953, and its use was far from standard in the late 1950s, in part because of cost. What I’m not clear about, however, is how in the Berlin recording the transitions between each 10-minute reel of film were removed. Ditto, the theeatre interval, which I think occurs around 1 hour and 53 minutes in, and which is elided with a simple title card.

Perhaps the breaks between the tele-recording rolls coincided with the rolling captions that display Brecht’s all-important texts introducing each of the scenes. It may be, as would have been standard in Britain at the time, that these were produced live with a fourth ‘caption’ camera, or – and this seems more likely from the overall ‘flow’ of the piece – they may have been created on film and edited in later. There are occasional glitches, as at 53:08, when a brief, near-blank screen may be the result of switching to the ‘wrong’ camera as it was changing lenses. Needless to say, I would love to know much more about the production process.

We have a number of comparable multi-camera recordings made in Britain during the 1950s, although to date these have been little-studied by either theatre or adaptation scholars, being thought to be crude and largely unmediated transmissions. Perhaps the closest in form to this Mother Courage is the BBC’s live transmission in the autumn of 1955 of the central 45 minutes of The Merry Wives of Windsor from the Shakespeare Memorial Theatre. (The Theatre Managers Association and Equity at the time prevented television broadcasting a full production from a theatre, but that’s another story, for which see my book Screening the Royal Shakespeare Company: A Critical History, about to come out in paperback.)

The ‘dazzling beauty of use’

Mother Courage and Her Children in the staging preserved so wonderfully in the 1957 recording was one of three productions (along with Trumpets and Drums and The Caucasian Chalk Circle) that the Berliner Ensemble brought to London in August 1956. The visit went ahead despite Brecht’s death from a heart attack on 14 August and, as we know from a later report in the Observer, the Foreign Office considering to refuse to issue visas. Mother Courage with Helene Weigel opened the season on 27 August.

Brecht’s work was little-known in England at the time, although Joan Littlewood’s Theatre Workshop had played a troubled production of Mother Courage, with Littlewood in the lead (a stipulation made by Brecht in granting the licence) in Barnstaple in late 1955. Nonetheless, the Berliner Ensemble’s Mother Courage had won Best Play and Best Production at the prestigious Festival of the Theatre of Nations in Paris in 1954, and the visit was much-anticipated. The context and reception is outlined in welcome detail in John Bull’s essay ‘Trumpets and drums in the night: the 1956 Berliner Ensemble visit to London and its aftermath’, which (wonderfully) is fully and freely accessible online thanks to Google Books.

As Bull notes, the critical response to the season was broadly positive, if at times cautious, but not, famously, from Kenneth Tynan, the thirty-year-old hugely influential theatre critic for The Observer. Tynan offered detailed and acute readings of the productions, often (but far from exclusively) concentrating on their visual aspects:

Reality is preferred, reality of a memorable and sculptural ruggedness. I defy anyone to forget Brecht’s stage pictures. No steps or rostra encumber the platform; the dominant colours are browns and greys, and against a high-encircling off-white backcloth we see nothing but solid, selected objects – the twin gates in The Chalk Circle, Mother Courage’s covered wagon. The beauty of Brechtian settings is not of the dazzling kind that begs for applause. It is the more dazzling beauty of use.

John Bull records the responses to the season of key theatre figures including Peter Gill and William Gaskill, and Art Boreca has summarised the conventional telling of the aftermath:

The 1956 visit of the Berliner Ensemble made a marked, lasting impression primarily upon directors and designers who held or were soon to hold key positions at the dominant London companies: George Devine, William Gaskill, Peter Brook, Peter Hall, John Dexter, Tony Richardson, and John Bury among others. A number of these artists knew little or no German and were responding primarily to the scenic, musical and gestural elements of the Berliner Ensemble’s productions rather than to Brecht’s ideas or writing. Through their work, a style of self-conscious theatricality became predominant at the Royal Court, the National Theatre and the Royal Shakespeare Company… This style later pervaded the production approach of experimental groups such as Portable Theatre, Joint Stock, the Traverse Theatre Company and 7:84.

Yet it should also be noted that Brecht’s plays saw comparatively few major British productions in the late 1950s and through the 1960s, although perhaps one of the most significant (and too rarely acknowledged) was Rudolph Cartier’s production of Mother Courage with Flora Robson, in an English version by Eric Crozier and using Paul Dessau’s original score, for BBC Television in June 1959. The cast also includes Georgia Brown and Rupert Davies. At the time, this made the cover of Radio Times, which makes a wonderful comparison with the Berliner Ensemble’s precious recording from two years before, which — until Thursday at least — we are privileged to be able to experience.

There is a short sequence that observes Cartier at work directing this studio production in Richard Cawston’s 1960 documentary This is the BBC, and an archive recording of the drama itself exists, although it is not easily available. It occurs to me that watching and discussing the Berliner Ensemble recording and the near-contemporaneous BBC television production could be so revealing and stimulating – with the possibilities of thinking about theatre and television, theatrical space and that of the studio, German approaches to Brecht compared to British (although Cartier was born in Vienna and worked briefly around 1930 in the film industry in Berlin), and so much more. Anyone up for working towards such a symposium in The After?