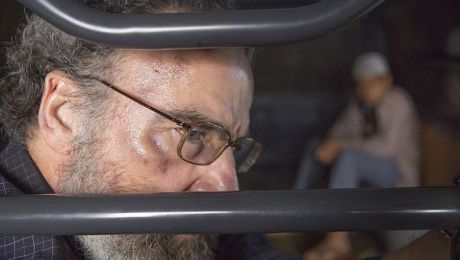 I watched some terrific television over the weekend, and not all of it on television. Much of Sunday I spent at BFI Southbank with two screening programmes of the estimable Missing Believed Wiped project. This is the name that the BFI applies to showings of television that was once thought lost but now is found, and on Sunday afternoon that was the very first and the very last episodes of the 1967 comedy series At last the 1948 Show. Bracketed by these was a charming, funny and immaculately performed interview by John Cleese, who spoke about the series – in which he starred with Graham Chapman, Tim Brooke-Taylor and Marty Feldman – as a precursor of Monty Python, but what was clear from these two recently rediscovered episodes was that much it was, and remains, extremely funny. Only the a handful of supposed jokes about gays and the unfortunate interstitial elements with Aimi MacDonald felt uneasy in a contemporary context. The ‘Annoying train-passenger sketch’ with Cleese and Feldman was one of the highlights:

Sunday also offered a very fine NHK 2″ video-recording of the astonishing two-hour broadcast Our World, produced by the BBC and 17 other countries as a live show from five continents linked for the first time by telecommunications satellites. There are a thousand things of interest about this broadcast, just a few of which I will try to tease out in a further post later this week.

On Saturday I enthused about ‘Contempt’,  S3 E4 of The Newsroom which Sky Atlantic screened in the UK last week. I laughed and cried through the concluding montage of Will’s wedding, but it seems that far from everyone did. Libby Hill at The A. V. Club was resolutely untouched, as she was by the grand jury testimony and imprisonment of Will (Jeff Daniels):

Not that any of that was well executed or meaningful or even particularly moving, but it was, at the very least, not openly offensive like most everything else in “Contempt.” So bland was the six and a half minute musical montage scored to a very mediocre version of “Ave Maria” that there was a palpable sense of relief when Will was finally handcuffed and bodily removed from of the courthouse.

What gets the goat of many US writers on the series is what they perceive as the absurdly skewed portrayal of the new-media-versus-old debate and the portrayal of ‘the Internet generation’. As in The Good Wife, the digital transformation of society is central to The Newsroom, but I don’t see series creator Aaron Sorkin parodying the discussion as does Libby Hill, among many others:

Aaron Sorkin disregards this generation because this generation disregards Aaron Sorkin. Undoubtedly, he received notes from HBO on how to make this exact show more appealing to audiences. The show was never the hit it was supposed to be. Critical acclaim was sporadic and always highly contentious. No one loved The Newsroom the way they were supposed to love The Newsroom, and now it’s going away and Aaron Sorkin would like to be very clear about whom he blames about the entire matter.

Equally as good and a hundred times more suspenseful as The Newsroom was Sunday night’s ‘There’s Something Else Going On’, S4 E9 of Homeland, which had one of the most surprising finales of a television show that I can recall – and that’s recognising that Homeland itself has given us the bombing of Langley and the supposed resurrection of Brodie. Here’s a taster of the episode:

Highly recommended is Todd VanDerWerff’s piece for Vox in which he argues – and I think rightly – that the current fourth series of Homeland is ‘one of the most damning critiques of American foreign policy and the security state US television has ever aired.’ VanDerWerff argues that Carrie essentially represents contemporary America as it is and Saul is America as it imagines itself.

What’s been interesting is both how clearly the show draws these parallels between Carrie and the country she represents and how much the geopolitical world of the show has shifted under her feet (just as it has in reality). This season of Homeland is largely about negotiated withdrawal, about the idea that the war on terror was a boondoggle of epic proportions, and now all the US can do to salvage its interests is save face by negotiating a drawdown that doesn’t look like a complete surrender…

The world of Homeland is one where moments of goodness are fleeting, because everything else is dragged down into the mud. The greatest thrill of season four has been watching the show remember that.

One further recommendation is The Legacy, a DR series showing on Sky Arts. The label Nordic Noir is being applied a little lazily to this import, since even though it comes from the production team of The Killing it is closer to the thoughtful, stylish but non-crime drama of Borgen. An eccentric Danish artist, whose work rather closely resembles that of the late Louise Bourgeois, lives on a glorious but delapidated country estate. She is estranged from one son and another is living the good life in Thailand, and with her elder daughter she has a complex and rocky relationship. But there is another child – only this girl doesn’t know that the artist is her mother. Just before the artist dies, she seeks out the daughter she gave up months after her birth, and then elects to leave the whole estate to her.

In a Guardian article a year ago, Stuart Jefferies looked forward to the UK showing of The Legacy:

The drama recalls one of the great modern Danish films, Thomas Vinterberg’s 1998 film Festen (The Celebration), in which a patriarch’s 60th birthday bash are ruined by familial revelations from the past. Trine Dyholm, who plays one of the siblings in The Legacy, also had a leading role in Festen. But while Festen was a product of the Danish Dogme95 movement which advocated the use of simple equipment, natural lighting and sound, no props and no makeup, and was largely confined to the arthouse cinema circuit, The Legacy is the product of a national TV broadcaster at the height of its international cachet.

Last week’s episode was the second of ten, for which this is the trailer: