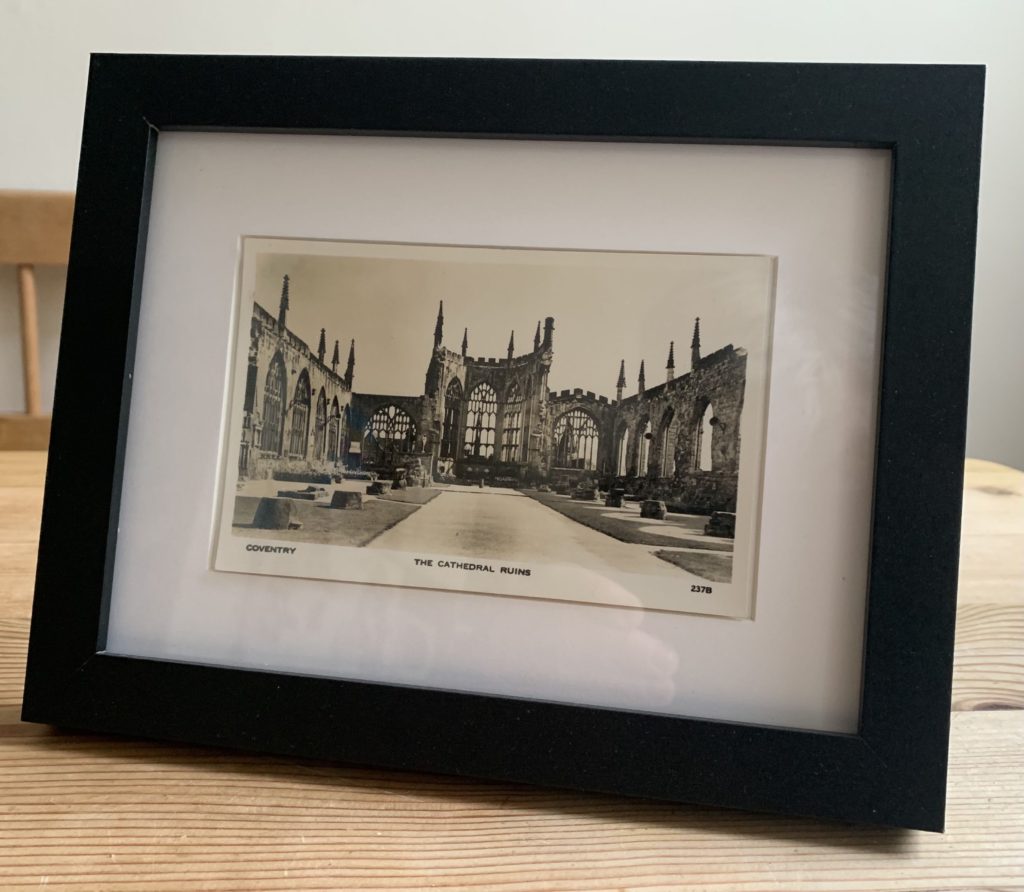 John Wyver writes: We’re thrilled to say that our 75-minute archive-based documentary Coventry Cathedral: Building for a New Britain will be broadcast on Wednesday 9 June at 9pm on BBC Four. Part of the BBC’s contribution to Coventry UK City of Culture 2021, the film tells the story of the rebuilding of the Cathedral after a German bombing raid in November 1940 reduced its medieval predecessor to ruins (above). At the same time, the film sets this story in the context of post-war Britain and of the reconstruction of the city of Coventry.

I first proposed this project to the BBC in 2011 and I’ve been working on it, on and off, for the past two years with a group of invaluable collaborators, most especially consultant Helen Wheatley, Professor of Film and Television at the University of Warwick, BBC commissioning editor Mark Bell, graphic designer Ian Cross and director of photography and editor Todd MacDonald.

For me the film is a complement – a kind of prequel if you like – to our documentary Drama Out of a Crisis: A Celebration of Play for Today, shown on BBC Four in October and still on BBC iPlayer. For Coventry Cathedral we have further developed the innovative use of archival moving images, and I’m going to explore aspects of this in a series of ‘postcard’ blog posts in the coming days. In the meantime, here’s the BBC press information for the film:

Coventry Cathedral is recognised today as one of Britain‘s greatest post-war buildings. Using a wealth of rarely-seen archive film, together with voices from yesterday and today, Coventry Cathedral: Building for a New Britain tells the story of the rebuilding of the cathedral following its destruction in 1940. It is presented as part of the BBC’s programming around the Coventry UK City of Culture 2021 and narrated by Pauline Black, the lead singer of the Coventry band, The Selecter.

In November 1940, German bombers destroyed much of the city centre of Coventry and reduced the city’s medieval cathedral to rubble. Immediately after the air raid, Reverend Richard Howard, Provost of Coventry Cathedral, made a commitment to rebuild the cathedral. In 1951 the architect Basil Spence won the competition to design the new cathedral, built in a bold, modern style, incorporating the ruins of the old cathedral and adorned with a wealth of modern artworks. Despite the opposition of the local council, shortage of funds, and major architectural challenges, the new building was consecrated in the presence of Queen Elizabeth just a decade later in May 1962.

The cathedral contains works of art commissioned from some of the major artists of the 1950s. Graham Sutherland designed the vast tapestry of ‘Christ in Glory’, John Piper and Patrick Reyntiens created a glorious multi-coloured window for the Baptistery, and John Hutton carved angels and saints into a huge glass screen for the main entrance.

The cathedral was a key element of the post-war reconstruction of Coventry, which also saw the city create an innovative pedestrian precinct, build many new homes, schools and hospitals, as well as open the Belgrade Theatre and the Herbert Art Gallery.

Over the next fortnight I am interested in digging deeper into the details of the ‘wealth of rarely-seen archive film’, not all of which is in fact ‘film’. The story that the documentary tells takes place between 1940 and 1962 and in addition to newsreels and corporate films there are elements of early factual television, including two key programmes recorded on videotape as outside broadcasts: a 1962 ATV report on the opening of the Cathedral, Out of Burning, presented by Kenneth Clark, and the BBC’s live coverage of the Consecration Service on 25 May 1962, with Richard Dimbleby.

The archive films and recordings themselves, as well as the contemporary audio that we use, are very much part of the story, with all of their imperfections, glitches and other traces of their history. We have also tried to respect the very particular qualities and ‘atmospheres’ of the archive elements and not simply to use them as illustrations of an external story. This is a history not only of the Cathedral, and of modern Coventry, but also of the post-war media world. These are themes to which I will return over the coming days.

Most of the film is moving image archive but over the past months, working with Covid protocols, we have also filmed in and around the Cathedral, and we are immensely grateful to the authorities there for their generous cooperation. We filmed inside the building with a jib, and filmed both exteriors and interiors with using drones. But we have not shot any talking head interviews, although we have made a number of new audio recordings, and we are delighted that Pauline Black has contributed the narration. Nor do we have a on-screen presenter.

One further aspect to be returned to is our use throughout the film of a visual language of split-screens and ‘spatial montages’. Todd, Ian and I began to explore the potential of these techniques in Drama Out of a Crisis and we have taken them in new directions for this documentary. Our hope is that this offer a truly rich visual experience that does justice to the archive and to the Cathedral. We look forward to learning how you and any others feel about that in the coming days.

PS. The header image is an archive postcard of the ruins of the old Cathedral Church of St Michael, which was given to me as a birthday present by my daughter Kate. I think the image must date from the late 1940s or early 1950s when the rubble from the bombing had been cleared away but before construction work had started on the new building. In the body of the post is the title card at the conclusion of the film’s opening, beautifully designed by Ian Cross and incorporating the Cathedral’s artworks by Jacob Epstein and Graham Sutherland; there is much more to say about them, and about archive related to their creation and installation.