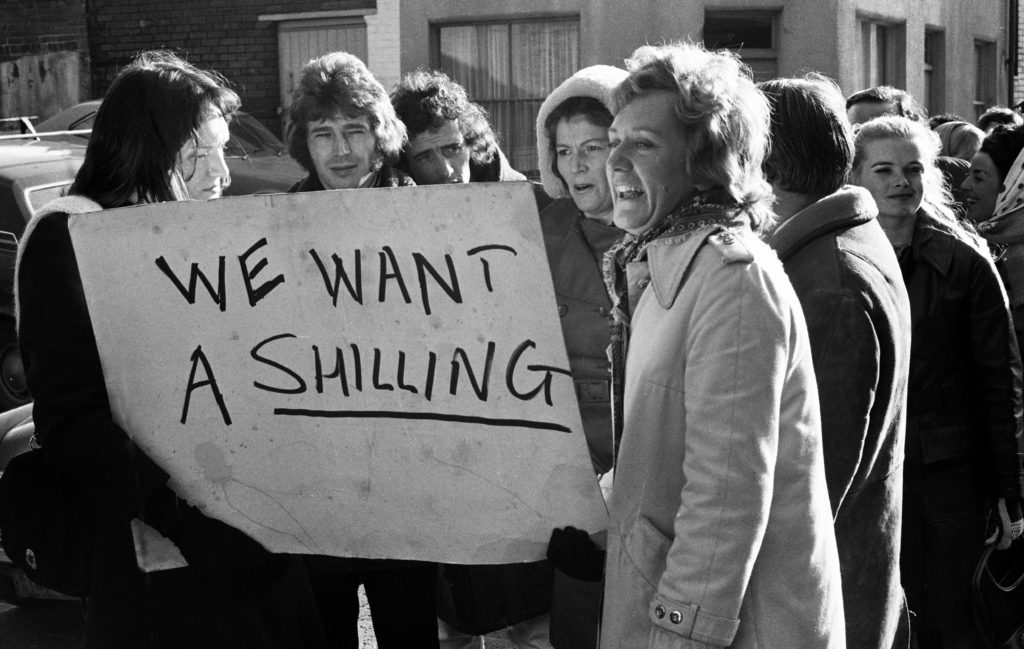 I feel confident in asserting that Drama Out of a Crisis uses both moving image archive and stills in ways that are denser and richer than many historical documentaries. We have drawn on a really extensive range of elements, often using only a few frames from a programme, and we have frequently employed split-screen techniques so that there are two, three or even more elements running simultaneously. At the same time we have integrated a number of comparatively lengthy elements from key plays, which run uninterrupted (and just as they are in the original, with no internal cuts) for two minutes or more.

Respect for the archive

Approaching and employing the archive with respect was a fundamental principle for us, and key to this attitude is retaining for all of the main extracts the original aspect ratio of the broadcasts. All Plays for Today, whether made on film or tape, were shot and mastered with a 4:3 frame ratio. All television now is made with a wider 16:9 ratio and far too often programme makers take off the top and bottom of 4:3 material so that it fills a 16:9. This is a barbaric practice which is deeply disrespectful towards all those who created the original.

I’ll write more about this in a post focussed on the graphics but what happens when you embed, or ‘pillar box’, a full 4:3 sequence in the centre of a 16:9 frame is that empty areas open up to the right and left. We worked with graphic designer Ian Cross to create a palette of ‘textures’ of subtle patterns and colours to fill these areas, as well as to enrich the areas around our split-screen configurations.

I hope we have been similarly respectful in our captioning all of the main archive elements, detailing not only the title of each play and its date but also its writer and director. We explored offering even more information in graphic form, identifying for example key actors in an extract, but ultimately this felt distracting. Moreover, it quickly proved impossible to decide who to identify and who to leave as anonymous. As it is, I hope you’ll take your own pleasure in spotting Harriet Walter, Kenneth Branagh and a host of others as they were forty or so years ago.

Almost all of the moving image archive, from both the plays and films themselves and from contextual material illustrating social and political themes comes from BBC Archives (for the few exceptions, see below). It has been a privilege and a joy being able to work so freely and so creatively with such a rich resource, and the programme is able to take the form it does because of two operational databases that underpin the operation of BBC Archives.

The first of these databases is Archive Search which indexes all of the existing materials and contains available metadata (of varying detail) and, where they exist, low resolution digital files (that is, of not sufficient quality to be broadcast) that can be directly downloaded by an authorised user. If a programme we wanted to view had not yet been digitised we were able to request this, and for tape masters the low res was made in short order. But for a handful of dramas for which only film masters existed we needed to have made new high definition masters.

For four productions we were able to borrow film copies and commission our own scans at The Ark, one of the London post-production facilities authorise by the BBC to work like this. So we created new film masters of The Rank and File (wr. Jim Allen, dir. Ken Loach, 1971), Double Dare (wr. Dennis Potter, dir. John Mackenzie, 1976), and Shadows on our Skin (wr. Jennifer Johnston, Derek Mahon; dir. Jim O’Brien, 1980), extracts from each of which are included in the film.

We also made a new master of Long Distance Information (1979), a beautiful, funny, rich film written by Neville Smith and directed by Stephen Frears. All-but-forgotten, this is one of the little-known glories of the strand for me (in part because as a young Time Out journalist I made a location visit during the shooting), and I deeply regret that we couldn’t find space for even a brief clip in the documentary – we edited and re-edited a sequence about it but ultimately couldn’t not find a way to make it “work” apart from playing it at a length for which we simply did not have the space. I’ll try to find another context in which to write more about the film.

Equipped with the low res files we were able to begin to make choices of shots and sequences to edit with, and at this stage in the production process the other database, Digital Archive, proved to be transformative. Digital Archive facilitates the authorised user to access directly high resolution broadcast masters and either to download a very chunky file of a full programme or to identify via the interface a specific sequence and then to request just this part of the programme. Usually within a half hour or so you receive an e-mail with a download link for just the section you identified.

For those of us old enough to have spent hours and days identifying clips that one wanted to be transferred from film to tape by ‘papering up’ film prints with slips inserted into unwieldy reels on a Steenbeck (note for those under about 40, try Google) this is an astonishing, glorious technological advance. Even in recent years ordering and securing archive clips from tape masters has been time-consuming and prone to error, so to work instantly on an automated system like this feels extraordinarily liberating.

Archive Search and Digital Archive combined meant that Todd and I could work with a far wider range of BBC archive than we might otherwise have had time and resources to do. We might return to this after more people have been able to see the film, but the visual style of the programme has been made possible and to a degree shaped by these forms of archive access. All of which is a concrete demonstration that an archive is far from a neutral repository but rather a potential creative collaborator. I knew this before but our experience over the past three months has brought it home to me in a quite new way.

But it’s not only the archive access that has made the style and approach of the programme possible. We have also been able to work with such a plethora of wonderful images because, first, all of the films are owned by BBC Television and we had direct access to masters, and second, because the documentary uses the extracts ‘for the purpose of criticism or review’ and always with appropriate acknowledgement.

As such, under the ‘fair dealing’ provisions of section 30 of the Copyright, Designs and Patents Act 1988, the integration of the clips does not infringe any copyright in the work. And so we have been able to draw on such a wide range of extracts without needing to secure extensive permissions or pay prohibitive fees. I should say that we recognise how privileged such a position is and we have been scrupulously careful not to abuse it in any way.

There were just a small number of elements that we needed to licence (and pay for) in a conventional way from film libraries: a Tony Garnett interview and two shots of director Alan Clarke at work (taken from editions of The South Bank Show) via ITV Archive, together with a heart-stopping moment towards the end from the 1964 documentary The Dream Machine, directed by Denis Mitchell for ATV; the Armchair Theatre titles from StudioCanal; and some exquisite shots of Britain at the end of World War Two from British Pathé.

But inevitably there’s a downside to working with the ‘fair dealing’ provisions of the CDPA. This legislation is specific to the United Kingdom and would not apply were we to distribute the film and its extracts abroad. Moreover, as a BBC commission the film can employ all of the extracts (and also BBC photos, to be discussed in a future post) without a direct charge to the budget. But if we wanted to release a DVD or make the documentary available on a commercial streaming service we would be required (not unreasonably) to negotiate fees for the extracts and images, and the return would almost certainly not make this viable.

One other point is important while we’re talking rights. We have included a number of commercial music tracks from the 1970s and ’80s – see what you can spot – and we have been able to do so, again without charge because for BBC Four and BBC iPlayer we have been able to make use of the BBC’s blanket agreements for music publishing rights and recordings. Beyond a BBC public service context we would either have to secure (and pay for) separate agreements or replace this music with library music or new compositions.

All of which is to say that is extremely unlikely that Drama out of a Crisis will have a life beyond its screenings on BBC Four and the year that it will stay on BBC iPlayer. Enjoy it while you can!