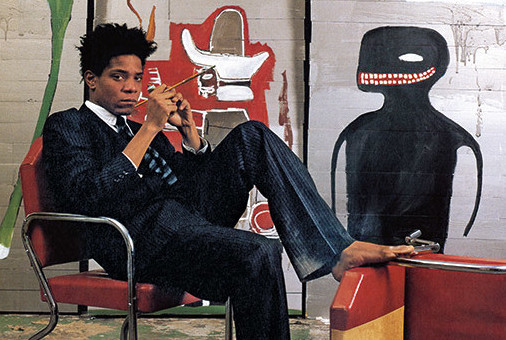 Today is Jean-Michel Basquiat’s birthday. Had he not died of a heroin overdose in 1988 he would be 60 years old. For someone whose painting career only lasted eight years at most and an additional three as a street artist, his impact has been immense.

Illuminations have had a small part to play in Basquiat’s legacy, having filmed the artist, alongside Andy Warhol as part of our State of the Art series in 1985, which remains one of the very few interviews of him on film. This has had quite an afterlife, being our most-watched YouTube clip and our most requested piece of footage for licencing, having been used in Shooting Star (1990) and in Jay-Z’s ‘4:44’ in an 18-second clip of Basquiat that can be viewed around 5 minutes and 30 seconds in.

Basquiat’s legacy spans both the art world and popular culture. In May 2017 Untitled, 1982 sold for an astonishing $110,500,000 that set a new record high for any U.S artist at auction and is spoken in the same breath as Francis Bacon and Picasso. His work has recently adorned fashion brands as diverse as Coach, Uniqlo, and Commes des Garçon shirt for whom Basquiat had walked the SS87 runway show for Rei Kawakubo’s mainline.

While Basquiat’s legacy as a cultural icon can be seen in how he is held up by artists of colour as the first African American artist to become an international star. And the aforementioned Jay-Z, an icon in his own right, has cited him as an influence, going so far as dressing up as the artist for Halloween.

You can purchase the entire State of the Art series on DVD and digitally or you can purchase single episodes, including Episode 6: Identity that features the Basquiat interview. We also have an excellent documentary about the artist’s life from Jean-Michel Vecchie, simply called Jean-Michel Basquiat.