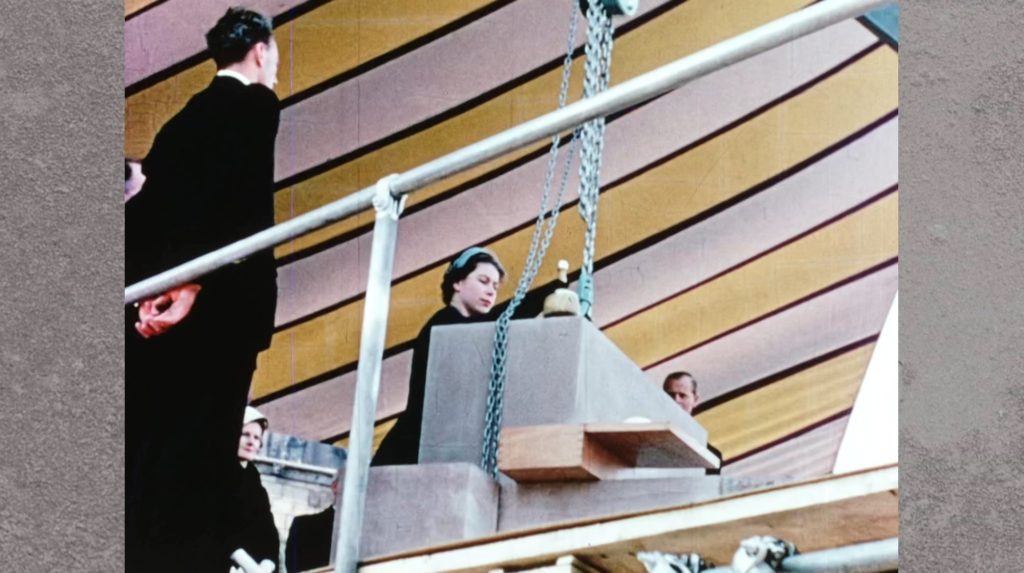 John Wyver writes: Ahead of tomorrow night’s broadcast (9pm, BBCFour), here’s the fifth post in a series about our new documentary Coventry Cathedral: Building for a New Britain. The first four are here, here, here and here. Like the others, this comes with the recognition that you may prefer to save up these posts until after transmission.

Tomorrow, Wednesday 9 June, from 7-9pm, and then after the broadcast finishes at 10.15pm, both I (@Illuminations) and our consultant Helen Wheatley, Professor of Film and Television Studies, University of Warwick (@hmwheatley) will be on Twitter to answer questions and hear your thoughts. I’m hoping that our wonderful graphic designer Ian Cross (@crossfaq) and equally wonderful DoP/editor Todd Macdonald (@toddmacdfilm) will be around for at last some of the time as well. We’re going to use the hashtag #CoventryCathedralBBCFour. Plus, I’ll do a post here tomorrow for similar exchanges. We really do want to know what you think.

Today’s post reflects on the archive included in fourth chapter of the film, ‘Taking Shape’, which is focussed on the construction of the new cathedral from 1954 through to the end of the decade. The start of building works is the point at which the moving image archive record really kicks in, and also when we move from a predominantly monochrome world to one soaked in period hues – as, for example. with the shot above of the 1956 ceremony of the laying of the foundation stone.

There are three key archive sources for this section, which are complemented by fragments of material from British Pathé and AP Movietone. One, from which the framegrab above comes, is a 45-minute film made by the builders Laing as a corporate record of their extensive work on the cathedral. Laing had a very active internal film unit, as did many large companies in the immediate post-war years, and much of their extraordinary record of the construction of the built environment is now looked after by the BFI National Archive. Thanks to the BFI and to the John Laing Charitable Trust, we have incorporated a total of 10 minutes of sequences from their film Coventry Cathedral. (Laing also created a remarkable photographic archive, including many images of the building of Coventry Cathedral which is now administered by Historic England.)

Laing’s Coventry Cathedral is finely shot on colour 16mm stock and records many of the key processes of the construction. Engagingly, like the shot above, a number of frames feature prominent signage for the company, both attached to machinery or displayed on notice boards. A somewhat overbearing narration features on the soundtrack along with an insistent orchestral score that Todd Macdonald and I rather tired of after weeks in the edit. There are moments in our documentary, however, when both voice and music adds a strong period feel, and throughout we were delighted to be able to work with such a rich collection of moving images. The Laing image below, however, comes from another source.

The filmmaker Barnard Reyner shot the Laing information hut and also the informal group portrait of Basil Spence sharing a joke with two collaborators (doubtless someone will correct me, but my guesses are that’s Provost Howard on the left and even perhaps John Laing on the right?). Reyner was a Coventry architect who was not part of Spence’s team, but rather was commissioned by the cathedral authorities to document the building process. Again, the technical quality of his footage is strong, and he unquestionably had an ‘eye’ for a striking image, almost certainly informed by his own practice as an architect.

Reyner eventually edited a 45-minute mute compilation which he took round to local halls and societies, as above (thanks to Martin Williams for this flyer). These showings were accompanied by gramophone records from his personal collection and by Reyner himself reading a script, a typed copy of which we have. His film, together with some ten reels of developed rushes, were carefully looked after by a family member, and thanks to, first, Helen Wheatley’s Ghost Town project, then the invaluable assistance of Martin Williams, Chairman of the Friends of Coventry Cathedral, and finally expert digitisation by MACE (Media Archive for Central England at University of Lincoln), we are thrilled to show historic sequences for the first time in 50 years.

Our third key source for this section is the single most important film made about the new Cathedral. An Act of Faith, written and produced by Robin Whitworth for BBC Telvision and directed by John Read. First shown in the week of the consecration of the new cathedral in May 1962, this is an exceptionally well-crafted documentary made on 35mm film.

The BBC began shooting for this documentary in the mid-1950s when television was making very few films of this kind. The embarked on the project without a precise sense of what the final result would be but with a recognition of the significance of the new cathedral. Early sequences, like the one illustrated above filmed in the office of Basil Spence, were shot in high contrast black and white by the brilliant cinematographer A.A. (‘Tubby’) Englander (who would later go on to be the director of photography for Civilisation (1969).

After the foundation stone had been laid in 1956, Englander switched to more expensive colour stock, even though colour television from the BBC was still a decade away. The images from these sequences, as the next two frames show, are wondrously evocative. An Act of Faith is also very finely edited and in the long extract about quarrying, working and transporting the stone that is at the heart of this chapter we have preserved the perfectly-judged pacing.

By the time An Act of Faith was broadcast director John Read (the link is to my 2011 Guardian obituary of John, who I was privileged to know) was established as the BBC’s go-to filmmaker about modern art. He had made the BBC’s first film documentary about an artist, Henry Moore (1951) and he had also directed profiles of John Piper and Graham Sutherland (both films were released in 1953). As we’ll see in the next chapter, Piper and Suthrland made major contributions to the new Coventry Cathedral. Indeed, a fragment of Read’s somewhat uneasy film with Sutherland features later in our documentary.

One of the many fascinating aspects of An Act of Faith is a concern with the idea of English-ness that runs through the film. These are English craftsmen, we learn, working in age-old English traditions, and this echoes Spence’s own interest in English ecclesiastical architecture. For all its modernist aspects and contemporary trappings, Spence’s new cathedral is rooted in the past and rooted too in the land which, as An Act of Faith illustrates so brilliantly, offers up its sandstone to English stonemasons with only minimal resistance.

A key event in this chapter is the laying of the cathedral’s foundation stone on 23 March 1956, which was filmed for Laing, by Barnard Reyner and by newsreel crews, and in our split-screen sequences we feature shots from each of these sources.

The left-hand frame below comes from the Reyner rushes and captures a BBC outside broadcast camera operator in a scaffolding tower. The ceremony was broadcast live, and like the Consecration Service was produced by Barrie Edgar with commentary by Richard Dimbleby. But unlike on the later occasion, no record was kept of this transmission, or at least none appears to exist in the archives today. But…

… part at least of the ceremony must have been preserved, at last for a time, since we have the shot below which is clearly from that live broadcast. This unique trace has only come down to us because, fortuitously, it was incorporated by John Read into An Act of Faith.

The final moments of this chapter are dedicated to another ceremony which, despite it being more private than public, was filmed by several camera operators. This is the wedding of architect Anthony Blee, who had been working closely with Basil Spence on the building, and the architect’s daughter Gillian. Both Anthony and Gillian have contributed delightful and richly informative audio interviews to our documentary.

Anthony and Gillian were married in the crypt of the unfinished cathedral in February 1959, and in one shot by (I think) the British Pathé camera oprator, you can briefly glimpse Barnard Reyner with his camera between and behind the bride and her proud father. Reyner was filming in colour, and we have used a couple of his images which are amongst my favourites in the whole of documentary (and which you’ll need to watch to see them).

The informal shots of the guests at the wedding, especially the one below, seem to say so much about Britain at the end of the 1950s. The faces, the hats, the coats are from a world that feels in some ways very familiar and yet is also strikingly distant and strange. That, of course, is the fascination and the beauty of archive footage – and it’s also why this short scene that acts as a bridge into the next chapter about the artworks is perhaps the two minutes of what we’ve made that delights me most.