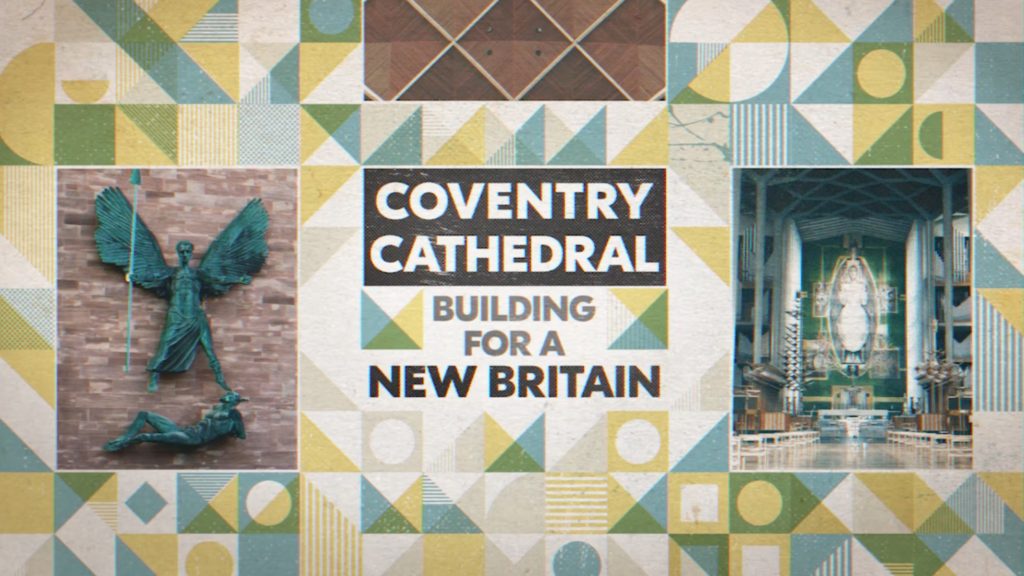 John Wyver writes: I know that posting comments to blog posts is so late noughties, and as a consequence no-one does it anymore, but I am going to try this as an experiment. Our new film Coventry Cathedral: Building for a New Britain is broadcast tonight on BBC Four at 9pm and will then be on BBC IPlayer for a year.

The 75-minute documentary weaves together an account of the rebuilding of the Cathedral in the wake of a German bombing raid in November 1940 with the social history of post-war Coventry, and more generally of the country as a whole. We feel that it uses a wealth of archive sources in a distinctive and innovative way – and we’d love to know what you think.

I’m going to use this post to collect previews and reviews of the film, and to link to one or two resources, including my other blog posts. Tonight, the film’s consultant Helen Wheatley, our graphic designer Ian Cross and DoP/editor Todd Macdonald will be on Twitter from 7-9pm and then after the broadcast at 10.15pm responding to questions and learning what you make of it. We’ll be using the hashtag #CoventryCathedralBBCFour.

If you watch the film and would like to contribute your thoughts away from Twitter, do please consider posting a comment below and help us develop a Coventry conversation. I will moderate what gets written but only to the extent of blocking anything offensive – I promise to feature the negatives along with any positives.

Posts on this site that provide more information about the film include the following (and I’ll be adding further posts in the coming days):

Most of the previews of the film to date have been straightforwardly drawn from the BBC’s press information, but Gabriel Tate contributed a peach of a response to the Telegraph on Saturday:

John Wyver’s film is a marvel, using the postwar reconstruction of Coventry Cathedral as a parable for 20th-century Britain. BBC Four at its best.

And if you can’t wait for the film itself, you can view a preview clip here.

Now, over to you…